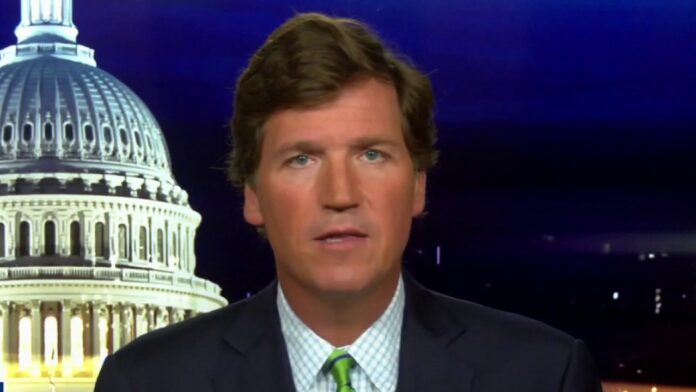 Tom Friedman has been a columnist at the New York Times for 25 years. In that quarter-century, Friedman has raised banality and cliche mongering to a kind of art form. Like Picasso, he wastes nothing.

There’s not a single piece of mindless conventional wisdom floating around Washington or New York City that Tom Friedman hasn’t managed to whip into a hasty column at one time or another.

Naturally, our ruling class loves him. They consider him brilliant. They read Tom Friedman on the Peloton every morning and they feel affirmed. He is as dumb as they are.

TUCKER CARLSON: KIDS SHOULD GO BACK TO SCHOOL — GUESS WHO IS OPPOSED TO THAT SIMPLE IDEA

We refer you to Friedman’s column Wednesday morning because there is no question, it is a taste of things to come and very soon.

In that column, Friedman calls for Joe Biden to skip the fall presidential debates. For cover, Friedman adds a couple of silly caveats.

Biden should only consider debating, he writes, if Donald Trump releases years of his personal tax returns, and then agrees to have a panel of journalists sit on stage to call him a liar in real-time.

It turns out Tom Friedman is not really a genius. So, it’s pretty obvious what’s going on here. This is the most cynical election strategy ever devised or ever perpetrated on American voters.

Hide the candidate until Election Day, the country can find out what’s in the administration after it’s in power, but until then, no appearing in public, and my God, don’t ever tell the truth.

So will the Biden campaign take Tom Friedman’s advice? Well, of course, they will take it, because they have no choice.

Biden is up in the polls as of right now, so they can’t let him talk. That could wreck everything.

People might discover that Joe Biden bears no resemblance to the Joe Biden they remember.

JOE BIDEN (D), PRESUMPTIVE DEMOCRATIC PRESIDENTIAL NOMINEE: They would put 720 million women back in the workforce.

TEXT: While campaigning in New Hampshire….

BIDEN: I love this place. Look, what’s not to like about Vermont in terms the beauty of it and what a neat town.

Poor kids are just as bright and just as talented as white kids.

We choose science over fiction. We choose truth over facts.

Think about it. We hold these truths to be self-evident. All men and women are created by — oh, you know the — you know the thing.

“You know the thing!”

Imagine Biden spending six hours on stage with Donald Trump trading jabs on live television. No, he can’t do that, so he is not going to do that.

Instead, they’re going to keep Joe Biden hidden behind the curtain. He’ll read prepared speeches from time to time.

On a good day, he can pull that off, but nothing extemporaneous or off the cuff. He is not capable of that.

It’s all pretty shocking if you think about it. We’ve kind of accepted it, but pull back a little bit.

They’re running a candidate for president who cannot govern and they know that and they’re doing it anyway.

So what does that say about the people around Joe Biden?

Well, they are ruthless, obviously, and they’re not into debate, not just presidential debates, but any debate.

They don’t like being disagreed with. They don’t believe that there are two sides to any question. They believe their own views are the only legitimate views.

When you criticize them, they won’t engage with you. They don’t bother to rebut your points. They simply attack you.

Joe Biden himself attacked this show on Wednesday, in fact. He didn’t respond to the questions that we raised. He just called us names, and then his minions tried to pull us off the air.

We survived because thank God we work here. But you should know that’s how they plan to run the country.

Biden will pick some running mate whose identity makes it impossible for anyone to criticize her, and then they’ll describe any criticism of their governance as a hate crime.

We got a taste of that for eight years under Barack Obama, you know this — you know how it works.

And of course, they’ve been doing it for years on college campuses and in corporate diversity seminars, any place where they have total control.

Now the entire American population is getting the very same treatment.

Why are they doing that? Because they’re demanding that Facebook censor the president and his voters, ban conservative news outlets, allow only publications controlled by the left to decide, what is news?

Well, that’s most news outlets anyway, because there’s only one mass media company left in America that consistently dissents from the left’s view of things. You’re watching and reading content from it right now.

What do you think they plan to do to Fox News if they take power?

You can imagine, we’re in their way.

So, these people aren’t liberals. We call them that, but they’re not. They don’t wring their hands and wonder what to do next like your flaky fifth-grade teacher who wore sandals and worried about the fate of the baby harp seals or with a “Save the whales” sticker on her Volvo.

They’re not sentimental. These are totalitarians.

They know exactly what they want. They don’t wring their hands. They want power and they know how to get power.

Why are so many people being fired right now for absurdly trivial offenses? Liking the wrong tweet. Commenting on the wrong post. Making the wrong hand gesture accidentally? Why is that happening?

Simple. To terrify the rest of us into obedience. We better not say that, we could be hurt, too.

That’s the lesson we take as we watch people around us fired and destroyed for doing very small things.

That tells us the people around Joe Biden, they’re the ones doing this, rule by fear. They do not rule by consent as you’re supposed to in this country. They are in fact the true enemies of democracy. They don’t care what you think.

And just in case the rest of us missed the point, they are working hard to make self-defense against their mobs, their militia a crime. You cannot resist us, or we will prosecute you.

St. Louis Circuit Attorney Kim Gardner is threatening to arrest Mark and Patricia McCloskey for daring to defend themselves against a mob that was threatening to murder them, a mob of democratic voters, but they’re the criminals.

This is why the left wants to abolish the police. They’re not abolishing law enforcement, they are replacing them with a woke militia of armed social workers, psychologists and ethnic studies majors. Also obedient Democratic voters.

And it’s why in places where the police still exist, they want to make certain you’re too afraid to call them.

In San Francisco, Supervisor Shamann Walton has introduced the Caution Against Racially Exploitative Non-Emergencies or CAREN Act. Hilarious if you think about it.

A law we’re told is against hate that is named after a racial slur, but it’s not actually funny. The bill would make it a hate crime for citizens to call law enforcement based on “racial bias.”

How exactly do you think that law will be applied? You don’t have to wonder. Call the police because you’re frightened of mostly peaceful protesters threatening to kill you? You’re the criminal now.

And day by day, liberalism evaporates and the left’s troops — who call themselves liberals, children of the enlightenment — are falling in line behind what is clearly a power grip.

Just today, the founder of vox.com, Ezra Klein, someone regarded as an intellectual on the left, went on Twitter to explain why free speech is actually very bad.

“A lot of debates that sell themselves as being about free speech are actually about power, and there’s a lot of power in being able to claim and hold the mantle of free speech defender.”

Oh, we see where you’re going.

Actually, Ezra Klein is half right about this. Free speech definitely is about power. Power for people who don’t have any.

People like Ezra Klein want less free speech for others so they can have more power.

When they can tell you what you can say, what they’re really telling you is what you’re allowed to believe. They’re not controlling your mouth, they are controlling your mind and there’s no deeper control than that.

Any person who is telling you that is someone you should be very afraid of.