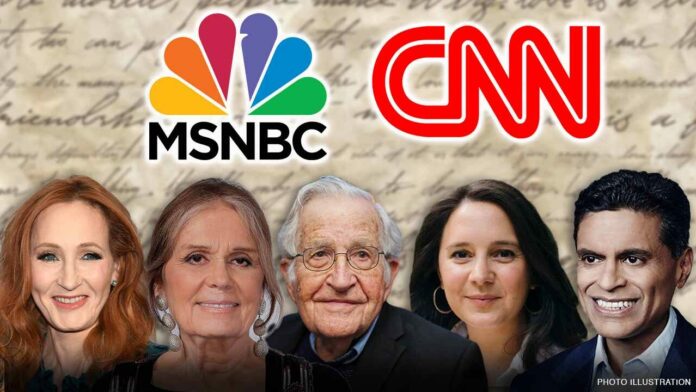 An open letter penned by prominent liberal writers, professors and activists in an effort to combat the so-called “cancel culture” has caused quite the stir on social media — but viewers of MSNBC and CNN may not have heard about it.

However, both liberal cable news networks avoided the subject on-air despite two of the signers attached to the letter being CNN host Fareed Zakaria and MSNBC contributor Michelle Goldberg.

In addition, neither CNN nor NBC News bothered to cover the letter on their respective websites.

Over the past two days, the letter has sparked an intense debate among liberals.

“Our cultural institutions are facing a moment of trial,” the letter begins. “Powerful protests for racial and social justice are leading to overdue demands for police reform, along with wider calls for greater equality and inclusion across our society, not least in higher education, journalism, philanthropy, and the arts.”

“But this needed reckoning has also intensified a new set of moral attitudes and political commitments that tend to weaken our norms of open debate and toleration of differences in favor of ideological conformity. As we applaud the first development, we also raise our voices against the second.”

While the letter calls President Trump a “real threat to democracy,” it also warns that the resistance should not “harden into its own brand of dogma or coercion,” insisting that an “intolerant climate” has plagued both sides of the aisle.

“The free exchange of information and ideas, the lifeblood of a liberal society, is daily becoming more constricted,” the letter explains. “While we have come to expect this on the radical right, censoriousness is also spreading more widely in our culture: an intolerance of opposing views, a vogue for public shaming and ostracism, and the tendency to dissolve complex policy issues in a blinding moral certainty. We uphold the value of robust and even caustic counter-speech from all quarters. But it is now all too common to hear calls for swift and severe retribution in response to perceived transgressions of speech and thought.”

“More troubling still, institutional leaders, in a spirit of panicked damage control, are delivering hasty and disproportionate punishments instead of considered reforms. […] We are already paying the price in greater risk aversion among writers, artists, and journalists who fear for their livelihoods if they depart from the consensus, or even lack sufficient zeal in agreement.”

The letter goes on to say that the “stifling atmosphere” that restricts public debate “invariably hurts those who lack power and makes everyone less capable of democratic participation.”

“We need to preserve the possibility of good-faith disagreement without dire professional consequences,” the letter says. “If we won’t defend the very thing on which our work depends, we shouldn’t expect the public or the state to defend it for us.”

At least two of the signers have since distanced themselves from the letter.

“I do not endorse this @Harpers letter. I am in contact with Harper’s about a retraction,” historian Kerri Greenidge told her Twitter followers. Her name has since been taken off the letter.

“I did not know who else had signed that letter,” Boylan tweeted. “I thought I was endorsing a well meaning, if vague, [messege] against internet shaming. I did know Chomsky, Steinem, and Atwood were in, and I thought, good company. The consequences are mine to bear. I am so sorry.”

Boylan’s tweet may have alluded to the inclusion of Rowling, who has faced backlash in recent weeks for remarks defending the concept of biological sex, which critics say were transphobic.

Rowling and journalist Malcolm Gladwell, who also signed the letter, slammed Boylan for making such an apology.

“You’re still following me, Jennifer. Be sure to publicly repent of your association with Goody Rowling before unfollowing and volunteer to operate the ducking stool next time, as penance,” Rowling knocked her literary colleague.

The open letter sparked conflict at the liberal outlet Vox after journalist Matthew Yglesias included his name onto the piece, which prompted several of his colleagues to publicly shame him.

Vox’s critic at large Emily VanDerVerff released a letter of her own that she had written to Vox editors voicing her concerns of Yglesias’ inclusion in the anti-cancel culture letter.

“As a trans woman who very much values her position at Vox and the support the publication has given her through the emotional and physical turmoil of transition, I was deeply saddened to see Matt Yglesias’s signature on the Harper’s Weekly letter,” VanDerWerff began her letter to the editors. “Matt is, of course, entitled to his own opinion, and I know he is a more nuanced thinker than signing the letter would suggest. He has never been anything but kind to me and has often supported my work publicly, all of which I am extremely grateful for.”

“But the letter, signed as it is by several prominent anti-trans voices and containing as many dog whistles towards anti-trans positions as it does, ideally would not have been signed by anybody at Vox, much less one of the most prominent people at our publication.”

VanDerWeff told the editors that Yglesias’ signature on the letter “makes me feel less safe at Vox” and claimed that it makes her job “slightly more difficult” as since, as she suggests, readers will “equate my positions with his.”

“I don’t want Matt to be reprimanded or fired or even asked to submit an apology. … But I do want to make clear that those beliefs cost him nothing,” she continued. “I am used to hearing them from people who believe my own lived experiences pale in comparison to their own momentary social media discomfort. I’m sorry to find Matt among those voices.”

Another Vox staffer, Aja Romano, similarly condemned “everyone who signed” the letter, though she did not name Yglesias by name.

“Today sucked. The Harper’s letter is a dehumanizing transphobic whisper network masquerading as reasoned intellectual debate,” Romano wrote. “Everyone who signed it has contributed to the real harm that its legion of transphobic signatories have brought to real trans people, especially teens.”

She followed on Wednesday, “Yesterday 3 trans Vox writers spoke against the Harper’s list, and all of us have now been directly targeted (and harassed as a result) by one of the writers on it. Just us, no other critics of the list. I want to be very clear about who benefits & who doesn’t from this ‘debate.'”

“The Harper’s letter is revealing a deeper issue: Do we judge opinions/arguments on their merits or on who makes them? Does signing a letter mean you endorse the letter? Yes. Does it mean you also endorse the opinions of those who also choose to sign it? That’s the question here,” Williams tweeted.

Williams later explained, “I thought signing a statement defending the principle of liberalism would be uncontroversial, particularly for journalists. But based on the reactions, that is not the case, hence my attempt to articulate what seems to be the core of the debate.”

Ezra Klein, Vox founder and editor-at-large, appeared to allude to the open letter, saying, “A lot of debates that sell themselves as being about free speech are actually about power. And there’s *a lot* of power in being able to claim, and hold, the mantle of free speech defender.”

That sparked a response from Yglesias, who asked Klein, “Should I reply to this with a concrete example or stick to my commitments to you?”

Klein dismissed critics who suggested he would reprimand his colleague, “The idea that I would try to get Matt, literally my co-founder and oldest friend in journalism, fired over this letter is risible.”

“I’ve asked Matt, and others at Vox, to not subtweet colleagues. My mistake here is this read like a subtweet of him, when it honestly wasn’t,” Klein clarified.

Yglesias, a co-founder of Vox, also attempted to “de-escalate” the exchange.

“Nobody is losing their job and I think I’ve spoken my mind very clearly on this subject,” Yglesias wrote. “I am just trying to move on to other things instead of endless rounds of twitter wrangling.”

Vox senior vice president and editor-in-chief Lauren Williams offered a forceful response to the tensions that have played out publicly.

“Proof that Twitter is not real life: In real life, I’m the EIC of Vox and the f—ing boss,” Williams stated. “I don’t tweet, so folks who don’t know or work with me seem to think a variety of other people wield that power.”