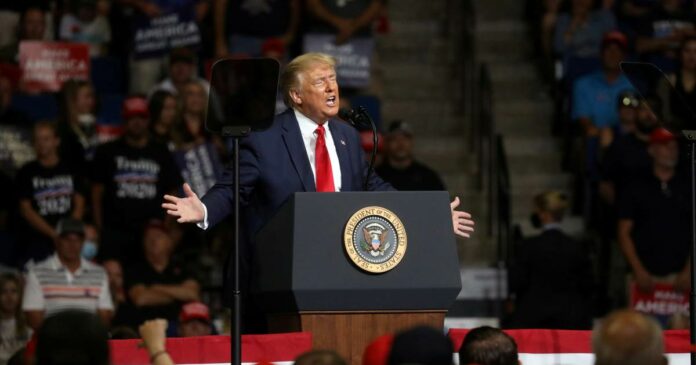 WASHINGTON — President Donald Trump’s return to the campaign trail in Oklahoma last month was viewed as such a debacle that his re-election effort is working to avoid future underwhelming crowds while also considering new safety measures for all large events this summer, including the GOP convention, according to multiple people familiar with the decision-making.

“We can’t have a repeat of Tulsa,” a campaign official said, bluntly conceding that a rally on Saturday in Portsmouth, New Hampshire, must be approached differently as the coronavirus pandemic sets daily case records and creates havoc for political planners.

Instead of opting for an indoor venue, as it did in Tulsa, the Trump campaign selected an open-air airport tarmac hangar to minimize its footprint Saturday and to appease health experts who stress that outdoor events are safer, although mass gatherings are still considered risky.

Officials say similar adjustments are being discussed for the Republican National Convention, which is set to take place at the end of August in an arena in Jacksonville, Florida, that can hold 15,000 people.

The dual recognition that Trump probably won’t be able to hold events as he once did — or accept his renomination in the packed environment he has envisioned — is the latest example of how the White House and the campaign have continually underestimated the virus and repeatedly set unrealistic expectations.

A White House official said the president “sees now,” after the disappointing turnout three weeks ago in Tulsa, that his supporters may not turn out for him at his rallies — or the convention — as they did four years ago because of concerns about the virus.

Unlike in Tulsa, where campaign manager Brad Parscale touted nearly 1 million RSVPs and an overflow stage that could accommodate thousands of people, staffers aren’t offering any kind of preview for anticipated crowd size or attendee requests for Saturday’s rally in New Hampshire.

Face coverings were offered at the rally in Tulsa’s BOK Center in June, but very few people wore them inside the arena, which seats more than 19,000 but had large blocks of empty seats throughout.

In Portsmouth, masks will be “strongly encouraged,” a departure from the Trump administration’s and the campaign’s past mixed messaging. Although masks still won’t be mandated, staffers are expected to wear them Saturday, a Trump spokeswoman said.

The campaign advance team and anyone who will be in close contact with the president will continue to be tested before the rally. In Tulsa, at least six members contracted the virus while on the ground, including Secret Service personnel. After the rally, two more advance staffers who had attended the event tested positive.

Download the NBC News app for breaking news and politics

The reasons for the decision to travel to New Hampshire for the next Make America Great Again gathering were twofold: The state is an important battleground ahead of the general election in November, and it has recorded a steady decline in coronavirus cases over the last few months.

Still, some local officials, including Republican Gov. Chris Sununu, are wary of giant crowds and stressed that they would stay away from them. While Sununu said he will meet Trump on the tarmac, and he stressed that he would wear a mask, he will skip the rally itself.

“From the very beginning, the governor has said he plans to avoid large gatherings of people so long as COVID is still around,” a spokesman for Sununu said. “He intends to greet the president of the United States at the airport — as he has for every other presidential visit — and then depart ahead of the rally.”

A White House official said a contingency option for the convention is to gather a smaller crowd indoors for the president’s keynote address aimed at a television audience, in addition to a larger outdoor component.

The president could be forced by Jacksonville’s local guidelines to limit the number of people in order to stay under the capacity of whatever venue he chooses. The city has mandated that masks be worn indoors, although it’s unclear how long that will continue. The Republican National Committee has said it will follow local guidelines.

Two Republicans familiar with the planning said officials are also considering shortening the convention, which is scheduled for three days.

No decisions have been finalized, but several prominent Republican senators have said they won’t attend the convention because of health concerns.

Another White House official said the president’s team is looking at “all sorts of different mitigation efforts” for the convention, including practicing some degree of social distancing, using outdoor spaces and recommending that attendees wear masks.

“It’s not going to look like previous conventions,” the official said. “But we still expect it to be a significant rally.”

There is also the question of how much such large events contribute directly to coronavirus surges. More than two weeks after the Tulsa event, which the local fire marshal said 6,000 people attended, a top health official is linking a rise in cases to the rally.

“In the past few days, we’ve seen almost 500 new cases, and we had several large events just over two weeks ago, so I guess we just connect the dots,” Tulsa’s health director, Dr. Bruce Dart, told The Associated Press.

The Trump campaign disputed the correlation.

“The president’s rally was 18 days ago, all attendees had their temperature checked, everyone was provided a mask, and there was plenty of hand sanitizer available for all. It’s obvious that the media’s concern about large gatherings begins and ends with Trump rallies,” campaign communications director Tim Murtaugh told NBC News.

And White House press secretary Kayleigh McEnany defended the decision to host the Tulsa event, telling reporters Thursday that “we have not seen data to reflect that, and, no, we don’t regret holding the rally.”

No additional mega-rallies are on the campaign schedule beyond the event in Portsmouth. Aides explored holding one in Alabama ahead of the Senate runoff there Tuesday, but they scrapped the plan when health experts raised concerns about coronavirus cases in the state.

The Republican convention is scheduled to be held Aug. 25-27. The RNC has said Trump’s speech accepting his party’s renomination will be Aug. 27 at VyStar Veterans Memorial Arena, which can hold up to 15,000 people. The first Republican official involved with the planning said that’s still the plan unless the president decides differently.

Since the RNC announced June 11 that the main programming of the convention will take place in Jacksonville, the number of coronavirus cases in Florida has increased by 526 percent, according to an NBC News analysis. The number of deaths from the coronavirus increased by 22 percent during the same time.