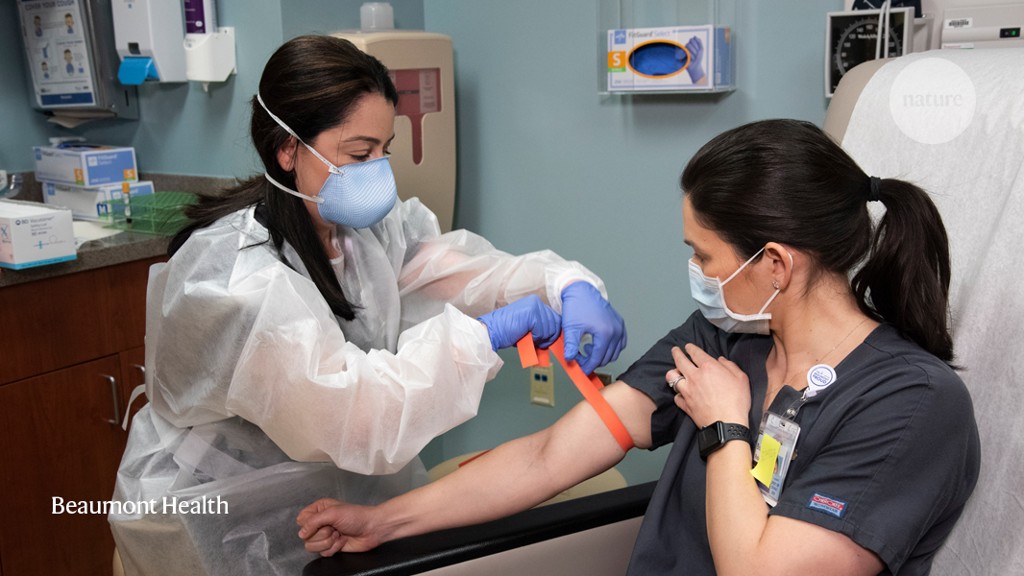 Last week, laboratories across the United States launched initiatives to test hundreds of thousands of people for antibodies against the coronavirus that causes COVID-19. And they’re telling those people the results — despite uncertainty about what they mean.

Researchers have been using antibody tests to try to reveal the true spread of the coronavirus in communities and cities. But these latest efforts are more controversial because they focus on an individual’s immune status. Unlike PCR-based tests, which identify genetic sequences belonging to the virus, these tests of the body’s immune response require more nuanced interpretation.

One class of antibodies may serve as a proxy for whether someone is currently infected. Some researchers argue that this is useful information to have when PCR tests are unavailable or delayed. Even greater interest surrounds a different set of antibodies that could reveal whether a person is protected from contracting COVID-19 again. Betting that antibody tests will loom large in the fight against the pandemic, clinics and labs affiliated with hospital networks in Virginia, Washington, Kentucky, Michigan and Ohio have already invested hundreds of thousands of dollars in equipment and infrastructure to run the tests at scale.

They’re couching the results they give to people in careful terms, and expect to adapt their procedures as new information comes to light. But because of the urgent need to get ahead of the outbreak, to prevent more people from dying and allow businesses to reopen, they argue that it’s important to just get going. The United States is the world’s epicentre of COVID-19 — more than 42,000 people have died with the disease in seven weeks.

If the bets on antibody testing pay off, their initiatives will provide a model that other states can follow. “One thing we have learned is that we can’t let perfect be the enemy of good — we need to act,” says Keith Jerome, director of the clinical-virology department at the University of Washington School of Medicine in Seattle, which has built capacity to process 15,000 antibody tests per day. “If we wait for every question to be answered, we won’t be ready for months.”

In mid-March, Rashid Chotani, an infectious-disease epidemiologist at CareLife Medical rented a floor of a medical building in Merrifield, Virginia to start offering rapid antibody tests. He has been using a 10-minute pin-prick test to screen people at risk of COVID-19, such as health-care workers, essential workers such as those with construction jobs, and the family members of those who have the disease. Many who visit his clinic can’t get a PCR-based test because a lot of hospitals offer them only to people with symptoms.

Antibody testing misses early infections, but Chotani suggests it could still be useful for people who are asymptomatic but afraid of passing the virus to someone else at work or at home. In general, the immune system produces different waves of antibodies to fight off invaders. One of the first waves, called immunoglobulin M (IgM), is generated around 4–10 days after a coronavirus infection.

Chotani recalls how a doctor who came to his clinic three weeks ago tested positive for IgM. Chotani backed up that result with a second test, then took a nasal swab and shipped it to a commercial lab to confirm the result with an official PCR-based diagnosis. But because those tests can take at least two days to process, he advised the doctor not to treat people until then. This is against the rules at many US hospitals, which ask nurses and doctors to work unless they have symptoms or a positive PCR test. But many health workers are nervous about this rule because the rate of asymptomatic coronavirus infections might be around 40%. “This is the dilemma we’re facing,” Chotani says.

In a white paper sent to policymakers in six states, he and his colleagues suggest that rapid antibody tests could help curb the spread of the virus in workplaces that can’t screen their staff with PCR.

But another dilemma is that the results of the rapid antibody tests can be wrong. The test Chotani is using has a 2% chance of giving a false positive result and a 15% chance of a false negative, according to its manufacturer, Boston Biopharma. Around 70 antibody tests have been developed in the past month, and they have not been thoroughly vetted for accuracy by the US Food and Drug Administration (FDA). That’s why the FDA and the World Health Organization say that only PCR-based tests for the virus should be used to confirm a case.

That point is debatable. China has updated its clinical guidelines to include a positive IgM result as an indication of an acute coronavirus infection. And many outbreak specialists are tolerant of imperfections because of the urgency of the situation, the lack of PCR tests and potential inaccuracies in those as well. Ranu Dhillon, an epidemic-response specialist at Harvard Medical School in Boston, Massachusetts, says that he, too, would stay at home if he got a positive result for IgM with a test that was relatively reliable. “Unless it’s a war-like situation when it’s all hands-on-deck,” he says, “I’d assume I was infected until proven otherwise.”

Testing for immunity to COVID-19 is also fraught. In the past week, politicians around the world have begun to focus on a later wave of antibodies generated in an immune response — called immunoglobulin G, or IgG — because of the hope that these antibodies might protect a person from getting the disease again. The immune system slowly produces this class of antibody, which ‘remembers’ a particular virus after an infection has passed. For some diseases, IgG antibodies encountering that virus neutralize it so that it can’t harm cells.

In Kentucky, Aruni Bhatnagar, an environmental health scientist at the University of Louisville helped to convince officials to test 6,000 health workers in the city with rapid antibody tests made by Cellex and Becton Dickinson. Hospital staff are at high risk of infection, so the team can observe whether those who test positive for IgG have a reduced risk of getting COVID-19.

Bhatnagar’s team also runs additional experiments on IgG-positive blood samples. They measure antibody levels with a more sophisticated assay called an ELISA. And they assess whether the IgG antibodies can stop the coronavirus from infecting cells in a dish. If they do, researchers will ask the individuals who gave the samples to donate blood for a plasma bank that they hope can help treat people with COVID-19. “We aren’t hit so hard with the disease now,” Bhatnagar explains, “so we can do this research in Kentucky that will help the United States.”

At the same time, researchers at Beaumont Health in Detroit, Michigan, are screening 38,000 doctors, technicians and other hospital staff for IgG antibodies, using an ELISA diagnostic test from EuroImmun. This test will allow them to learn if a certain level of the antibodies is required for protection.

In all of these cities, researchers are telling people their antibody status, but are doing so in careful terms. They say that people take comfort in being given more information at this bewildering time — even if that exposes the uncertainty inherent in the scientific process. But many scientists argue that it’s too early to use these tests and reveal the results. Amy Lockwood, a public-health specialist at the San Francisco Department of Health in California, worries about inaccuracies, or causing confusion. At the moment, she says, only PCR tests for the virus reliably reveal if it’s there: “Everything else is magical thinking.”

Antibody tests are a litmus test for scientists’ personalities, observes Scott Boyd, an immunologist at Stanford University in California. “Some people are incredibly uncomfortable because we lack a lot of information,” he says, “and some say it’s the best we can do now, so let’s just do something.”