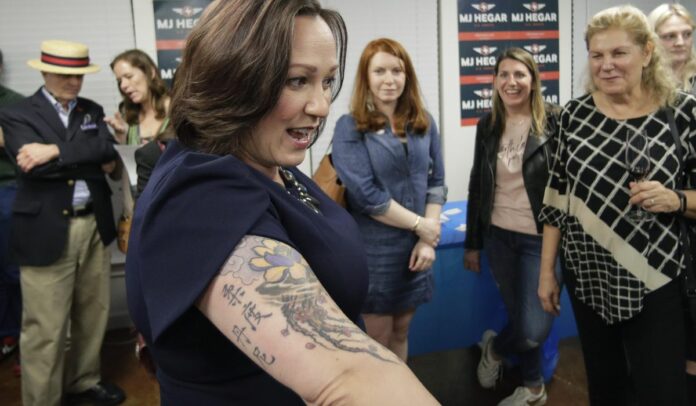 Democrats are bullish about ousting Sen. John Cornyn in November from his seat from Texas, where they have MJ Hegar — a tattooed, motorcycle-driving, decorated military combat veteran — fighting to prove that the state is indeed trending away from Republicans.

The Republican Party has had a stranglehold on statewide elections in Texas since 1994, but there is a sense that the state has been inching toward Democrats and that Mr. Cornyn’s old-school, low-key cowboy style has lost a bit of its political luster.

These days, bomb-throwing, high-octane Republicans are more in vogue in the Lone Star State.

“I think Cornyn is as vulnerable as he has ever been,” said Joshua Blank, research director for the Texas Politics Project at the University of Texas at Austin. “Having said that, he has not been terribly vulnerable in the past.”

Texas has changed a lot since Mr. Cornyn cruised to a third term in 2014. Mrs. Hegar is shaping up to be his toughest rival to date, Mr. Blank said.

“MJ Hegar still has a lot of work to do, but has a larger profile — both in Texas and nationally — than his last two Senate opponents,” he said.

Mr. Cornyn, 68, has been a longtime staple of Texas politics. He served as a state Supreme Court justice for more than five years before he was elected as state attorney general in the 1990s.

In 2002, Mr. Cornyn won his Senate seat by 12 percentage points and followed up with another double-digit victory in 2008. His best showing was in 2014, when he won by nearly 30 points.

Along the way, he has climbed the ranks of power in Congress and served as minority and majority whip.

Mrs. Hegar, meanwhile, is a relative newcomer to politics.

The 44-year-old served in the Air Force for 12 years, first as a maintenance mechanic and then as a pilot. She was awarded the Purple Heart after co-piloting a helicopter shot down by the Taliban during her third tour in Afghanistan.

She recounts her combat duty in her 2017 memoir, “Shoot Like a Girl.”

In 2012, Mrs. Hegar served as the lead plaintiff in an American Civil Liberties Union lawsuit that helped pressure the Defense Department to lift its ban on women in combat.

Her first stab at politics was in a failed 2018 bid to replace Republican Rep. John Carter in his district in suburban Austin.

Last week, she won a runoff election to capture the Democratic nomination and the chance to face off against Mr. Cornyn.

The Cook Political Report, a nonpartisan campaign tracker, rates the Senate race as “likely” to stay in Republican hands. It applied the same ranking to the reelection races of Senate Majority Leader Mitch McConnell of Kentucky, Sen. Lindsey Graham of South Carolina and Sen. Dan Sullivan of Alaska.

Mr. Cornyn has nearly $15 million in the bank, and Mrs. Hegar has about $1 million cash on hand, according to the latest campaign finance reports.

The disparity could make it easier for Mr. Cornyn to define Mrs. Hegar before she can define herself. His campaign has moved to do just that by dismissing her ability to replicate former Rep. Beto O’Rourke’s stronger-than-expected bid against Sen. Ted Cruz in 2018.

“MJ is no Beto,” the Cornyn campaign says.

His campaign also has branded her “Hollywood Hegar” and accused her of being more show than substance, casting her as a manufactured product of Hollywood and Washington liberals. Ads link her to liberal Sen. Elizabeth Warren of Massachusetts and far-left policies on climate, taxes, schools and health care that are “anathema to the majority of Texans.”

“Why won’t MJ answer questions?” a narrator says in a recent Cornyn ad. “Because Texans know the difference between reality and Hollywood.

“Hiding behind the curtain and bright lights might work in other states, but not here,” the narrator says. “MJ Hegar, don’t fall for the special effects. She’s Elizabeth Warren on a motorcycle.”

The message is accompanied by an animated, cartoonlike image of Mr. Schumer piloting a helicopter and tossing bags emblazoned with dollar signs into the state.

Presumed Democratic presidential nominee Joseph R. Biden started running a television ad in Texas last week, but it remains to be seen how much money Democrats plan to invest in the state.

Abhi Rahman, a spokesman for the Texas Democratic Party, said polls have shown voters are not as enthusiastic about Mr. Cornyn as they are about other Republicans in statewide office.

He pointed to a recent Dallas Morning News survey that found fewer than 4 in 10 voters planned to vote for Mr. Cornyn and 3 in 10 voters were on the fence.

“Sen. Cornyn is the least liked [statewide] politician in the state of Texas, and he is very highly unknown despite the fact he spent the last 20 years representing them,” Mr. Rahman said. “This is the most competitive race that he will likely face in his life.”

The Texas Republican Party is going through a leadership shake-up.

On Monday, former Rep. Allen West of Florida won the race to become chairman of the Texas Republican Party, stopping James Dickie from securing a second term and adding to the sense that it pays to be a renegade in the Lone Star State.

“Cornyn is a Republican about two vintages older than the most recent crop, and I just mean stylistically,” Mr. Blank said. “Cornyn is a very patriarchal and a traditional Republican senator, who has been surpassed in the minds of Texas Republicans by Ted Cruz and Donald Trump.”

That is not lost on Democrats. They say the state’s demographics have been trending in their favor, which is born out in recent elections.

In 2012, President Obama lost the state by nearly 16 points, and in 2016 Hillary Clinton shaved that down to 9 points.

Democrats got a big emotional lift in 2018 when Mr. O’Rourke came within 3 points of defeating Mr. Cruz.

Democrats flipped a pair of House seats and hope to roll that momentum in November. They are targeting seven Republican House seats, including three that are considered toss-ups.

They say Mrs. Hegar could be a tough opponent for Mr. Cornyn, whom they plan to portray as a career politician.

“MJ is everything Cornyn isn’t,” Mr. Rahman said. “Cornyn is a bootlicker, and MJ is an ass-kicker.”