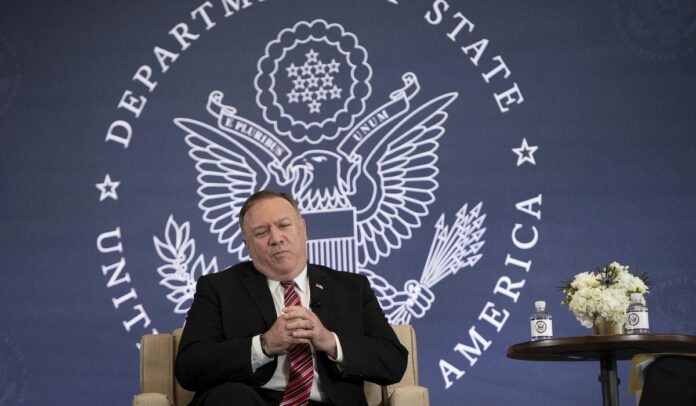 Secretary of State Mike Pompeo this week will deliver a major speech on the shortcomings of American foreign policy toward China, arguing that the record clearly supports President Trump’s new and tougher approach to Beijing.

The policy speech, set for Thursday at the Richard Nixon Presidential Library and Museum near Los Angeles, will be the fourth in a series of addresses by the most senior national security officials of the Trump administration. Taken together, the speeches mark the most systematic and comprehensive response by a U.S. administration to address the challenges posed by China’s rise as a global economic and military power.

“We put together a series of remarks aimed at making sure the American people understood the ongoing, serious threat posed by the Chinese Communist Party to our fundamental way of life here in the United States of America,” Mr. Pompeo told The Washington Times in an interview.

Mr. Pompeo contends that the basis for U.S.-Chinese relations since the 1970s — ever-deeper engagement and large-scale business, manufacturing and investment ties — is obsolete. The Trump administration, he said, is fashioning U.S. policies based on a relationship more in line with American values and principles.

The secretary of state also is expected to meet with a group of Chinese dissidents and pro-democracy advocates during his one-day visit to California.

In the interview, Mr. Pompeo said he plans to explain in detail how Mr. Trump has recognized the threat from China and the decades of harm it has caused to U.S. and other Western economies.

In response, the administration has begun to take “true concrete responses that can begin to reshape the relationship in a way that is fundamentally more fair and reciprocal for the American people, middle-class workers in America,” he said.

Past engagement policies, he said, failed to produce a moderate, pro-Western China. Mr. Trump is pursuing polices aimed at making sure China treats Americans “in a way that’s consistent with how we ask every country to behave,” Mr. Pompeo said.

The Pompeo speech will be the culmination of a series of high-level efforts to highlight the threat posed by China. White House National Security Adviser Robert O’Brien, FBI Director Christopher A. Wray and Attorney General William Barr also have weighed in on various aspects of U.S.-Chinese policy, each time drawing a sharp rebuke from Beijing.

Taking on the deep state

In the wide-ranging interview, Mr. Pompeo discussed the problem of bureaucratic resistance in the State Department and in the CIA, which he used to run, to Mr. Trump’s “America First” agenda. He said the administration is well-positioned to protect the security of the upcoming presidential election from foreign threats.

Mr. Pompeo also warned China not to arm Iran with advanced weapons when the arms embargo on Tehran ends in October. Beijing and Tehran are reportedly discussing a major economic and security pact in defiance of U.S. sanctions on Iran.

On the “deep state” opposition within the U.S. government, Mr. Pompeo said he has dealt with the resistance at the State Department, with its 75,000 employees, and during his role as CIA director.

“As for my experience now, 3½ years in, having first run the CIA and now as America’s chief diplomat, these are indeed big bureaucracies,” Mr. Pompeo said. “There are big bureaucracies in the private sector too, but inside government it takes a special capacity to get them all moving in the right direction.”

“I’m fine with people having different judgments, different views,” he said. “Even the senior leadership team at the State Department has different views. Air and vet them, make the case, build data sets around your argument, present them in a way that is rational and convincing.”

Disagreements also arise at the Cabinet level, but they are sorted out.

“When we’re done with [debate] and all that’s been sorted through, and the president has given guidance and I’ve issued implementation directions, the entire team has to work together to do that,” he said.

“There have been those who have decided they didn’t want be part of that,” he said. “So be it. They should leave. But everyone who remains, everybody who’s got their oar in the water still trying to pull America in the right direction has the true responsibility to execute in a way that’s consistent with President Trump’s foreign policy objective. And my mission is to make sure this organization, the State Department, and the CIA before that, did precisely that.”

On Iran, recent news reports said Beijing is in the final stages of concluding an economic and military deal with Iran worth $400 billion for infrastructure, and closer defense and intelligence cooperation. China, which supports the 2015 Iran nuclear deal that the Trump administration repudiated in 2018, in the past has provided missiles and other military hardware to Iran despite nuclear sanctions.

“We’re watching the reporting … about the relationship between Iran and China,” Mr. Pompeo said. “We will hold every nation accountable that violates U.S. sanctions.

“I hope that the Chinese Communist Party sees that it is not in their best interest to support and provide weapons systems to the world’s largest state sponsor of terror.”

Mr. Pompeo said he hopes Beijing will support U.S. efforts at the United Nations to block the lifting of the arms embargo on Iran. China, Russia and even some European allies have sent strong signals that they will oppose Washington’s efforts to preserve the embargo, a provision of the 2015 nuclear deal.

“It should not be the case that the world is going to stand by and allow an Iranian regime that continues to sponsor terror all around the world to allow them to be an arms merchant, allow them to purchase air defense systems and other capabilities that will protect them so that they are more capable of delivering nuclear weapons,” Mr. Pompeo said. “We’re not going to allow that to happen. I hope that the Chinese Communist Party will join alongside of us.”

Mr. Pompeo said the Trump administration is seeking to overhaul and improve U.S. radio broadcasting and information programs now that the first chief executive, Michael Pack, is now in place at the U.S. Agency for Global Media.

Mr. Pack dismissed all the directors of several government-funded radios, and the director of the flagship Voice of America, Amanda Bennett, stepped down before she could be fired. Mr. Trump has criticized VOA broadcasts, leading some critics to accuse the administration of threatening the service’s journalistic independence.

The message to be beamed abroad will be that “America is a force for good and that the threats that emanate from regimes like the Chinese Communist Party need not be tolerated and that America will be there to support those freedom-loving nations,” Mr. Pompeo said.

China and its neighbors

For the first time in decades, the administration agreed to sell new F-16 jets to Taiwan and has supplied other important weaponry in a bid to bolster the island’s defenses against China’s growing encroachment in waters along its periphery, Mr. Pompeo said.

Mr. Pompeo also said that what he called China’s failure to abide by its commitments in Hong Kong — Beijing recently approved a tough security law for the enclave that critics say violates a 1997 handover agreement to respect self-rule and autonomy in the former British colony — is raising worries about China’s threats to use force against Taiwan.

China has “a series of commitments they’ve made to the people who live in Taiwan and to the world, the fact that they will not use military force,” Mr. Pompeo said. “We set out in every conversation we have with our Chinese counterparts our expectation that they will live up to those commitments.”

China’s neighbors in the region, he added, increasingly appreciate the American security commitments in the face of Beijing’s aggressiveness.

Mr. Pompeo said the Trump administration is actively supporting Hong Kong activists in their challenge to Chinese rule. Asked whether the curbs on freedom can be rolled back and democracy restored, Mr. Pompeo said, “The people of Hong Kong are going to demand it.”

An election is set for September, and Hong Kong voters will have a chance to “raise their voices” against Beijing in “demanding the freedom that the Communist Party promised them.”

On Chinese expansive maritime claims to own most of the South China Sea, Mr. Pompeo said the U.S. conducted a careful legal review before the State Department declared last week that those claims are illegal under international law.

Mr. Xi “then did, and the previous administration did nothing,” Mr. Pompeo said.

Beginning in April 2018, the Pentagon detected the deployment of Chinese anti-ship and anti-aircraft missiles on several South China Sea islands. Mr. Pompeo said the U.S. is preparing a series of actions in response to Chinese militarization in the sea.

The Trump administration has begun providing assistance to nations China has challenged in the South China Sea. After last week’s statement from Washington, Mr. Pompeo said, China seems to have backed off the legal claim and is now negotiating agreements with individual states in the region in a bid to “pick them off one by one.”

“We’re going to do everything we can to make sure that [the Chinese] are not successful at that,” he said. “We cannot let China claim all of that sea as their maritime empire. This is a free and open Indo-Pacific region.”