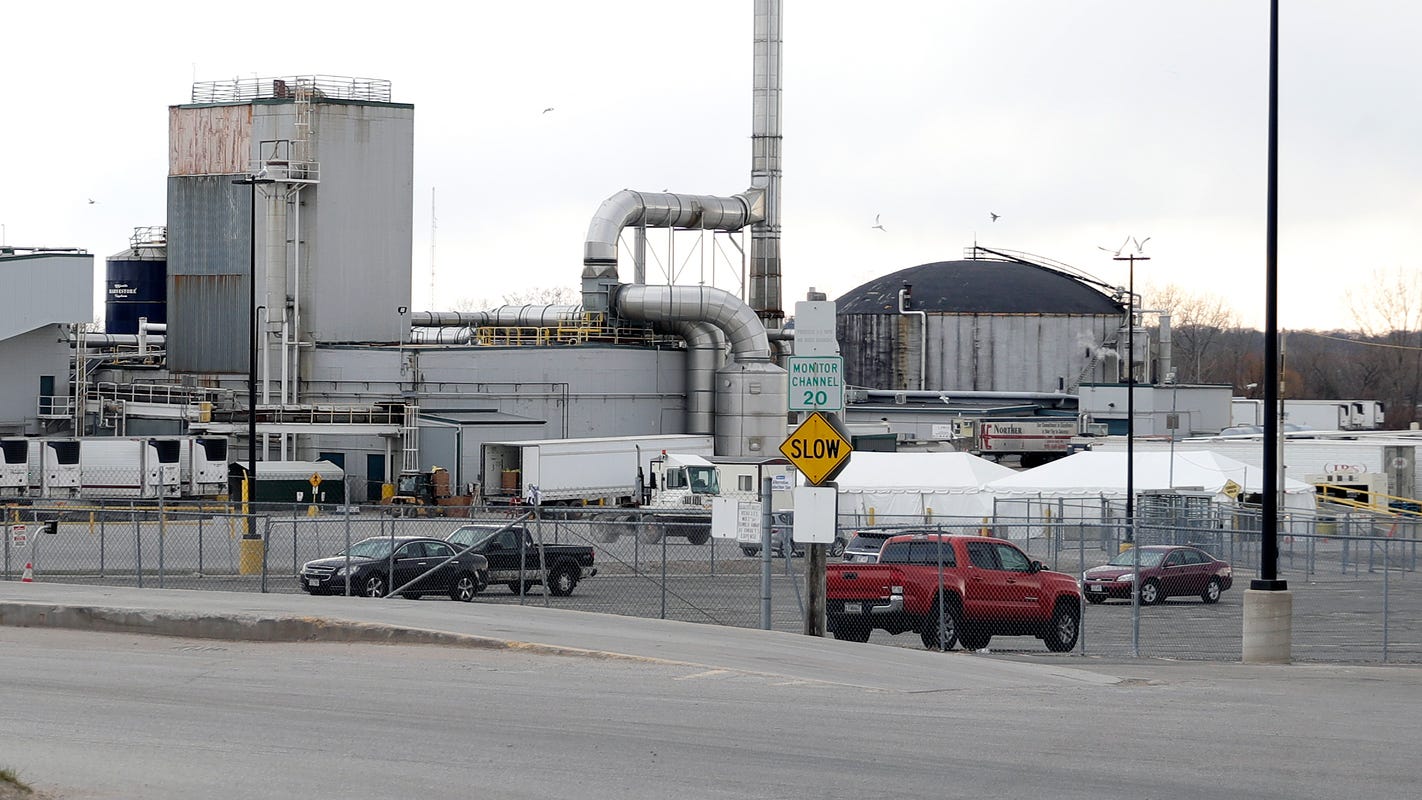 GREEN BAY – Brown County officials are investigating a cluster of coronavirus infections linked to an east-side meatpacking plant after the county’s total number of confirmed cases climbed to nearly 300 over the weekend.

The county on Monday reported 292 cases, an increase of 119 since Friday, along with five in the Oneida Nation. Half the new cases reported in Wisconsin since Sunday involve Brown County residents.

The weekend surge came after Brown County officials called in the Centers for Disease Control and Prevention to help investigate an explosion of cases in the Green Bay area.

Twenty-two people are hospitalized with COVID-19, the disease caused by the new coronavirus, said Ted Shove, an environmental health manager for Brown County.

The recent spike includes a cluster of cases at the JBS Packerland meatpacking facility at 1330 Lime Kiln Road, Shove said. The number of cases from the plant is unknown. Shove said the CDC will assist with contact tracing to determine how many people were infected.

The county also confirmed coronavirus cases at American Foods Group in Green Bay and Salm Partners in Denmark, but Shove said those meat-processing companies have not seen as many as JBS. The CDC has indicated there is a low risk of contracting the virus through food products or packaging that are shipped at room or cold temperatures.

Statewide, nearly 4,500 people have tested positive for the virus; 230 have died.

In a statement Monday afternoon, Salm said 10 employees have tested positive out of a workforce of 500 and that those employees have been on paid leave since being diagnosed. The company said it’s taking “aggressive and immediate measures,” including free voluntary testing, to protect workers and ensure that its products remain safe.

The county is investigating whether JBS followed its public health recommendations.

“If necessary,” Shove said, “we will consider enforcement options.”

In a statement to the Green Bay Press-Gazette Monday, JBS said it would close a facility if the company did not believe it is safe, or if absenteeism affects the ability to operate.

JBS earlier this spring said employees who stayed on the job through May 15 would receive a $600 bonus. In addition the United Food and Commercial Workers International Union, which represents JBS employees, announced that roughly 1,000 workers in Green Bay will receive temporary pay raises of $4 an hour.

American Foods did not immediately respond to an interview request.

LIVE UPDATES:   The latest on coronavirus in Wisconsin

DAILY DIGEST:   What you need to know about coronavirus in Wisconsin

Gov. Tony Evers on Monday labeled the situation in Green Bay an outbreak that carries a “significant risk potential to the community.” The state sent 2,200 test collection supplies and personal protective equipment to the city.

The company also has a terminal for its JBS Carriers trucking operation. The terminal serves 63 trucks and employs 14.

An American Foods employee named Raquel said during a press conference Monday that she was sent home from her job on April 11 after she came down with a fever. She said she later tested positive for COVID-19 and infected her husband. The couple has four children.

Another woman at the press conference, which was broadcast live on Facebook, said her father works at JBS and was rushed to the emergency room and diagnosed with COVID-19. Now the entire household is sick, said the woman, Dora.

“My 5-year-old wants me to hug him, and I can’t because I don’t want him to get infected like we are,” Raquel said, urging people to stay home from work if they’re ill.

The two women were among those who spoke at the news conference held by Voces de la Frontera. The statewide advocacy group and union representatives are pushing for stronger protections for essential workers at risk of contracting the virus and bringing it home to their families.

Among their demands: masks, temperature checks and paid sick days for workers who test positive. Voces also contacted company and state officials, along with Green Bay Mayor Eric Genrich, and filed a complaint with the Occupational Safety and Health Administration on behalf of workers at JBS and American Foods, said Executive Director Christine Neumann-Ortiz.

“We have to ensure that first and foremost, essential workers and their families who are right now on the front lines are safe, that they’re treated fairly if they’re sick or they need to self-quarantine, if they or someone at their work site catches this virus,” she said.

JBS employees in other states have also experienced outbreaks. The company recently shut down a beef plant in Greeley, Colorado, and a pork-processing plant in Worthington, Minnesota.

Employees of JBS and American Foods facilities in Green Bay have expressed concerns about going to work under the circumstances, said Maria Plascencia, assistant to the director of Casa ALBA Melanie, a resource center for Hispanic community members in the area.

“I live in the east side and I know many families here are at home. One way or the other, they’re home,” Plascencia said. “So nobody’s working. Sometimes one of them is working only. It’s a tough situation and it’s going to get even worse.”

The plants are taking measures to address those concerns, she said. For example, employees’ temperatures are taken when they come into work. If their temperature is high, they are sent home and a nurse follows up.

Brown County officials revealed the source of the recent cluster three days after refusing to make that information public.

On Friday, county health officials had said they were investigating the role a “non-governmental organization with multiple locations countywide” might be playing in the sudden explosion in coronavirus cases in the county, but would provide no additional information about that organization.

Erik Pritzl, the county’s health and human services director, has not answered questions in a Sunday night email from the Green Bay Press-Gazette about how many JBS employees are awaiting results of coronavirus tests, and how many have been directed to self-isolate.

Shove said the increase in cases over the weekend is not solely because of the cluster at JBS, but could not say if it had anything to do with the April 7 election. State officials are monitoring whether cases will increase two weeks after in-person voting drove people to the polls despite warnings to stay home.

“I think in general, there’s a lot of community spread,” Shove said. “With the clustered increases, that’s also played a role in the overall case count.”

Health officials had earlier predicted the numbers in the Green Bay area would spike about two weeks after the elections. Because of a shortage of poll workers, the city had people vote at two polling places rather than the usual 31; that forced some voters to wait in line for hours.

Benita Mathew of the Green Bay Press-Gazette contributed to this report.