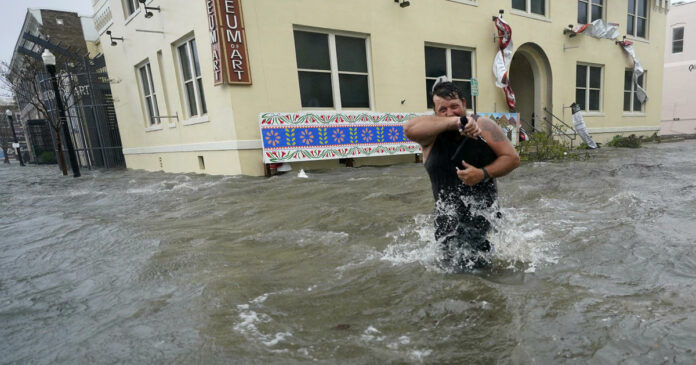 Several boats docked at a pier in Pensacola, Florida, have sunk as Sally moved over the Gulf Coast. Pensacola police spokesperson Mike Wood also said Wednesday he doesn’t know the whereabouts of a replica of one of the ships that made Christopher Columbus’s historic voyage.

Sally, now a tropical storm, lumbered ashore Wednesday morning near the Florida-Alabama line as Category 2 hurricane with 105 mph winds and rain measured in feet, not inches. It has swamped homes and trapped people in high water as it creeps inland for what could be a long, slow and disastrous drenching across the Deep South.

The following warnings were in effect as of 1 p.m. CT, according to the National Hurricane Center.

A Storm Surge Warning is in effect for:

A Tropical Storm Warning is in effect for:

The hurricane center notes that a Hurricane Warning from the Mississippi/Alabama border to the Okaloosa/Walton County line has been changed to a Tropical Storm Warning, and that Storm Surge Warning from Dauphin Island, Alabama, to the Alabama/Florida border was discontinued.

Part of the Three Mile Bridge knocked out in Pensacola

Sally has knocked out part of the new Three Mile Bridge, located in Pensacola, Florida.

Escambia County Sheriff David Morgan confirmed at a news conference Wednesday that a section of the bridge came off as the hurricane battered the city, the Associated Press reported.

Alabama Governor Kay Ivey said Wednesday that “many areas” along Mobile and the eastern shoreline of Mobile Bay are seeing historic flood levels.

She pleaded with people to stay home and not go on roads to check on storm damage unless absolutely necessary.

“It is imperative that we all heed warnings from our trusted weather experts and local leaders,” she said in a statement.

The U.S. Coast Guard has sent helicopters flying over the Gulf Coast to check for anyone in distress as Hurricane Sally pummels the region with wind and rain.

In a statement, the agency says MH-60 Jayhawk helicopters and MH-65 Dolphin choppers were checking for trouble, but had no immediate reports of any distress calls or search-and-rescue incidents as of mid-morning Wednesday.

Emergency crews plucked people from flooded homes Wednesday. In Escambia County, which includes Pensacola, more than 40 were rescued, including a family of four found in a tree, said Escambia County Sheriff David Morgan.

“There are entire communities that we’re going to have to evacuate,” Morgan said. “It’s going to be a tremendous operation over the next several days.”

The storm collapsed a section of the Three Mile Bridge across Pensacola Bay, the sheriff said, and crews struggled to stop a barge that had broken loose from drifting into a nearby bridge that is part of Interstate 10. Officials closed I-10, which runs parallel to the Gulf Coast, in hard-hit areas of both Florida and Alabama

Authorities tweeted pictures Wednesday showing flooding in Walton County, Florida, which is several hours east of where Sally made landfall.

The images showed one car stuck in flooding and others trying to cross a treacherous swath of roadway covered in water.

Over half a million power outages reported

More than 500,000 power outages are being reported in Florida and Alabama as Sally pummels portions of the two states.

Another 60,000 outages are being reported in Mississippi and Louisiana, according to poweroutage.us, which tracks outages across the country.

Officials across the region have warned people to sty indoors due to dangerous conditions including damage to roads, flooding and downed power lines.

The following warnings and watches were in effect Wednesday morning, according to the National Hurricane Center.

A Storm Surge Warning is in effect for:

A Hurricane Warning is in effect for:

A Tropical Storm Warning is in effect for:

Alabama gov.: “Please only call 9-1-1 for a LIFE THREATENING emergency”

Like other officials across the Gulf Coast, she urged people not to go outside to check on damage, and to stay away from live power lines and fallen trees.

McEnany didn’t have details on which officials the president had spoken with as of Wednesday morning but said “it’s safe to say the White House has been in active contact with all of these governors.”

Rainfall amounts “are piling up” along the coast

Forecasters report that rainfall amounts are “piling up” in the Florida Panhandle and southeast Alabama.

Sally had already dumped as much as 18″ of rain in some areas as of early Wednesday, creating catastrophic flash flooding, the National Weather Service said.

A curfew in Orange Beach, Alabama, has been extended until 12 p.m. Wednesday and will likely be extended again as officials get a better sense of the damage. The city told residents to shelter in place and warned of life-threatening conditions that will likely continue into Wednesday afternoon.

The city said first responders have been inundated with calls and asked everyone to “please be patient.”

“They are doing everything they can to assist,” it said in a Facebook post Wednesday morning. “They will respond as soon as conditions allow.”

Residents along coast urged to stay off roads

Officials along the Gulf Coast are telling residents to stay off roads due to dangerous conditions.

In Florida, Pensacola police asked people to resist the urge to drive around looking at damage Wednesday morning.

“High winds will still be here for awhile. We need the roads clear for emergency response,” they tweeted.

“Please stay inside unless there is an emergency.”

Similar warnings were issued in other areas along the coast, including Alabama’s Baldwin County, which continued to experience dangerous conditions.

Mayor: Dozens have been rescued from flood homes

City officials in Orange Beach, Alabama, say they’ve received 120 calls after midnight from people whose homes were flooded by Hurricane Sally. Mayor Tony Kennon says between 50 and 60 people were rescued and are staying in makeshift shelters Wednesday morning.

Kennon also said there are people they haven’t been able to get to because of high water. But he said they’re safe in their homes and will be rescued as soon as the water recedes.

Meanwhile, U.S. Coast Guard crews based in New Orleans are prepared to make rescues if needed, as soon as the storm passes.

Alabama’s Baldwin County, located between Mobile and Pensacola, is seeing major flooding and severe, widespread damage, according to the county’s emergency management agency, which called it an extremely dangerous situation.

“If you are on high ground above flooded areas, being prepared to stay where you are may be the best protection,” it tweeted.

Dangerous flooding is expected across the entire county, where rivers are rising quickly.

Florida Sen. Rubio: “This storm is going to cause extensive damage”

Florida Senator Marco Rubio said early Wednesday that Sally is going to cause extensive damage, “but praying we don’t lose any lives.”

Pensacola is getting the worst of the storm surge and is seeing very serious flooding as Sally drops heavy rain, he said.

“Praying for everyone in Northwest #Florida & have already been in contact with federal officials making sure we are ready to provide any assistance needed,” he tweeted.

“The wind is roaring as I take a first look from the balcony of our hotel,” he tweeted from the location, along Florida’s coast.

152,000 customers without power in Mobile area

Alabama Power, which provides electricity service to customers in the state, is reporting “significant damage” in the Mobile area and says 152,000 customers are without power.

More than 268,000 customers across Alabama were without power as of early Wednesday morning, according to poweroutage.us. More than 190,000 customers in Florida had no power, while Mississippi and Alabama were seeing more than 70,000 outages combined.

More than two feet of rain has been reported just west of Naval Air Station Pensacola, which is located along Florida’s Gulf Coast near its border with Alabama.

The National Weather Service in nearby Mobile, Alabama, noted it’s still raining in the area.

“We just gusted to 82mph at our office in west Mobile,” it tweeted. PLEASE CONTINUE TO HUNKER DOWN, GULF COAST. THIS IS NOT OVER!! PLEASE STAY SAFE.”

Sally makes landfall at same spot as Hurricane Ivan in 2004

Jonathan Kegges, a meteorologist at CBS affiliate WKMG, notes that Hurricane Sally is making landfall at Gulf Shores, Alabama, which is the same spot that Hurrican Ivan came ashore on September 16, 2004. Ivan was a Category 3 storm, while Sally made landfall as a Category 2 storm.

The National Weather Service Mobile, Alabama office has declared a Flash Flood Emergency for parts of the Mobile and Pensacola, Florida areas:

Police in Pensacola said, “Flooded roadways and intersections, along with hazardous debris in roadways have become too numerous to list. Please stay off the roadways now.”

Hundreds of thousands without power already

More than 350,000 homes and businesses were reported without power in Alabama, Louisiana, Florida and Mississippi as conditions deteriorated with Hurricane Sally slowly approaching.

In the Florida Panhandle city of Pensacola, water crept into downtown streets, forcing a utility truck to pass through the standing water.

Two large casino boats broke loose Tuesday from a dock where they were undergoing construction work in Bayou La Batre, Alabama. M.J. Bosarge, who lives near the shipyard, said at least one of the riverboats had done considerable damage to the dock.

“You really want to get them secured because with wind and rain like this, the water is constantly rising,” Bosarge said. “They could end up anywhere. There’s no telling where they could end up.”

CBS affiliate WKRG-TV said nobody was injured and tug boats were on the scene. The situation seemed under control, the station added.