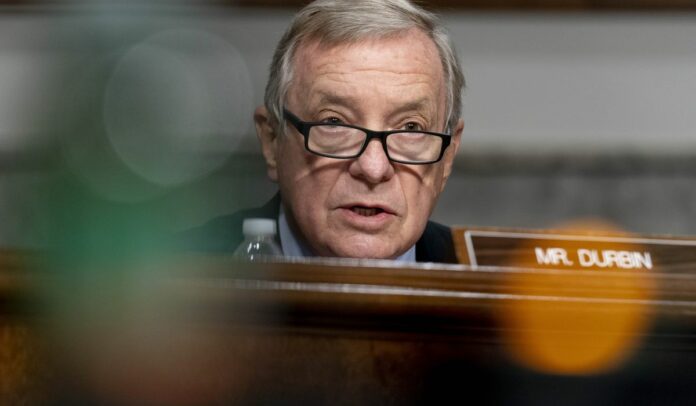 Democrats have no way to stop Senate Republicans confirming Supreme Court nominee Judge Amy Coney Barrett, but on Sunday, they labored to make her a punching bag in the health care debate, which they hope will propel them to victory in the November elections.

Senate Minority Whip Richard J. Durbin of Illinois, the No. 2 Democrat in the chamber and a member of the Judiciary Committee that will grill Judge Barrett, said there was no hope of derailing the nominee.

“We can slow it down, perhaps a matter of hours, maybe days at the most, but we can’t stop the outcome. What we should do is to address this now respectfully,” the Illinois Democrat said on ABC’s “This Week.”

President Obama’s signature health care law has become the left’s rallying cry for 2020, with the fate of the Affordable Care Act going before the high court Nov. 10. In the case, states challenged the GOP’s 2017 tax cuts that eliminated individual mandate’s tax penalties, saying it effectively killed the health care law.

“It’s no mystery about what’s happening here. President Trump was trying to throw out the Affordable Care Act. He’s been trying to do it for the last four years,” Mr. Biden said in a speech in Wilmington, Delaware. “Now, all of a sudden this administration believes they found a loophole: the tragedy of Justice Ginsburg’s death.”

Health care was the tip of the spear but Democrats and liberal groups also accused Judge Barrett, who currently sits on the 7th U.S. Circuit Court of Appeals, of being a threat to abortion. Along with complaints about the nomination coming too close to the election, these have been the chief lines of attack.

“If confirmed, right-wing judicial activist Barrett would reshape the law and society for generations to come. She is a detriment to our democracy,” said Aimee Allison, the founder of the feminist group She the People.

Still, Democrats and their left-wing allies have little hope of blocking Judge Barrett.

Her confirmation would grow the 5-4 conservative majority on the high court to 6-3.

“The American people should make no mistake — a vote by any senator for Judge Amy Coney Barrett is a vote to strike down the Affordable Care Act and eliminate protections for millions of Americans with preexisting conditions,” said Senate Minority Leader Charles E. Schumer, New York Democrat. “As the COVID-19 pandemic continues to rage unabated by this administration, health care was already the number one issue on the ballot in November.”

His office pointed to a tweet from the president on Sunday to bolster Democrats’ position.

“Obamacare will be replaced with a MUCH better, and FAR cheaper, alternative if it is terminated in the Supreme Court. Would be a big WIN for the USA!” Mr. Trump tweeted.

Mr. Trump ran on a repeal-and-replace promise in 2016 but has not put forward an alternative to Obamacare that can get through Congress.

At the White House, Mr. Trump told reporters that he needs to eliminate the remainder of Obamacare before moving forward with a replacement.

Mr. Biden also urged Senate Republicans to hold up the nomination until after the election, giving him a crack at being the president who picks Justice Ginsburg’s replacement.

Senate Majority Leader Mitch McConnell, Kentucky Republican, has the votes to move forward with Judge Barrett’s nomination swiftly. Mr. McConnell is set to meet with her this week on Capitol Hill.

Former White House Counsel Don McGahn, who helped Justice Brett M. Kavanaugh through his confirmation hearing, said gaming how a judge would rule on a case is “unfair one way or another.”

“You cannot guarantee results with judges. What you can guarantee is that they are going to approach the task of judging as a judge,” Mr. McGahn told the CBS program “Face the Nation.” “They’re going to try to play it straight and read the law as passed by Congress and as found in the Constitution, not based upon what they think it ought to be but what it is.”

Judiciary Committee Chairman Lindsey Graham, South Carolina Republican, scheduled confirmation hearings for Oct. 12, which would place the timeline for a final Senate vote by the end of October, days before the Nov. 3 election.

Judge Barrett would be Mr. Trump’s third Supreme Court appointee — the most of any president since Ronald Reagan — and potentially tilts the high court’s balance dramatically in favor of conservatives for years to come.

She would be the fifth woman to serve on the Supreme Court and the second to be nominated by a Republican president. Sandra Day O’Connor, appointed by President Ronald Reagan, was the first.

Judge Barrett, 48, would be the youngest justice on the high court. She also would be the first female justice with school-aged children.

The judge has seven children, two of them adopted from Haiti. Her youngest, Benjamin, 8, has Down syndrome.

Announcing the nomination Saturday from the Rose Garden, Mr. Trump lauded Judge Barrett as a legend and a towering legal mind, who he said possessed strong “loyalty” to the Constitution.

“I looked and I studied and you are very eminently qualified for this job. You are going to be fantastic,” Mr. Trump said to Judge Barrett.

He urged Democrats on Capitol Hill to be respectful of his pick, referencing the controversial hearing of his second nominee, Justice Kavanaugh.

She has a judicial reputation for being an “originalist” and a “textualist,” similar to the late Justice Antonin Scalia, for whom she clerked after she graduated from law school.

The judge praised the late Justice Ginsburg’s impact on women in the legal profession and touted her friendship with the late Justice Scalia — despite them being from different sides of the political spectrum.

“If confirmed, I would not assume that role for the sake of those in my own circle and certainly not for my own sake. I would assume this role to serve you,” she said to the American people.

Before her nomination to the 7th Circuit, Judge Barrett taught at Notre Dame Law School, where she also attended and graduated at the top of her class.

Her Catholic faith became a sticking point for Democrats during her confirmation hearing for the appeals court seat when they raised questions about if she could separate the church’s teachings on abortion and other matters from her judicial responsibilities.

Sen. Dianne Feinstein, California Democrat, told her the “dogma lives loudly within you” — a statement that has become a rallying cry for conservatives who charge Judge Barrett will be a strong jurist that would uphold the Constitution as written.

The Senate confirmed her to the 7th Circuit by a 55-43 vote on Oct. 31 of 2017. Three Democrats — Sens. Joe Manchin III of West Virginia, Joe Donnelly of Indiana and Tim Kaine of Virginia — voted with the GOP in support of the judge.

This time, though, Mr. Kaine and Mr. Manchin have said they don’t support the president filling the seat this close to an election — saying the winner of the election should fill the vacancy. Mr. Donnelly is no longer in the Senate, after being voted out in 2018 in favor of a Republican.

In the roughly three years that Judge Barrett has been sitting on the 7th Circuit, she has weighed in on legal disputes involving the Second Amendment, immigration and due process.

She disagreed with a panel decision to uphold a law that prohibited a convicted felon from possessing a firearm. The felon in question was nonviolent, having been convicted of mail fraud, but still had his Second Amendment rights stripped under the law Judge Barrett voted to strike down.

The judge also dissented from a majority ruling on the 7th Circuit which issued an injunction halting the president’s “public charge rule” that increased the requirements for a noncitizen to obtain a green card.

In 2019 Judge Barrett reinstated a lawsuit brought by a male college student who had been suspended after facing accusations of sexual assault by Purdue University. The student had sued the school, arguing he was discriminated against based on his sex and was unable to cross-examine the alleged victim and present evidence in his defense, upending his rights to due process.

Judge Barrett and the 7th Circuit panel sided with the student and allowed his case against Purdue to move forward.

The “Me Too” issue is likely to come up during her confirmation hearing, as it’s been an issue raised by Senate Democrats in the past who have peppered Mr. Trump’s judicial picks with questions involving women’s rights and decades-old sexual misconduct accusations that were never proven.

During her appeals court confirmation hearing in 2017, Judge Barrett vowed to follow precedent as a circuit judge.

“She is a rock-solid conservative, who demonstrated in her hearing for the 7th Circuit that she has a backbone of steel. Judge Barrett is young, brilliant, and exceptionally well-qualified. And she is an everyday American from the Heartland, who is a working mother of seven children — including a child with disabilities and two children adopted from Haiti,” said Mike Davis, president of the Article III Project which backs Mr. Trump’s judicial nominees.