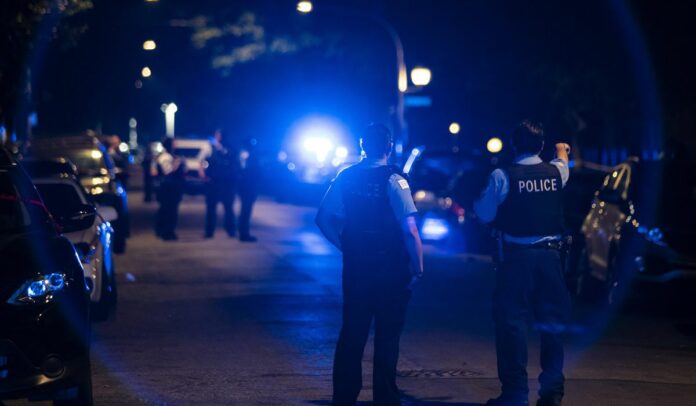 After weeks of street violence that has claimed hundreds of Black victims, including children caught in the crossfire of gang violence and random shootings, onlookers are increasingly asking: Where’s Black Lives Matter?

The movement that unleashed the most massive protests since the Civil Rights era over the May 25 death of George Floyd in Minneapolis police custody has been noticeably silent over the rash of shootings and street violence in the last few weeks afflicting predominantly Black communities.

“More people have been shot and killed in Chicago at this point in 2020 than in 2019, despite two months of stay-at-home directives,” said Los Angeles conservative radio host Larry Elder in an email. “Where is Black Lives Matter when you need them?”

As far as Mr. Elder is concerned, it’s a rhetorical question, one that he has repeatedly answered with the hashtag: #BlackLivesMatterOnlyWhenKilledByWhiteCops.

Mr. Elder’s take may be cynical, but it has also gained traction as weeks go by with no counter-argument from leaders of Black Lives Matter, admittedly a highly decentralized movement that includes both city and state chapters only loosely connected with national groups such as Black Lives Matter and the Movement for Black Lives.

Other Black commentators have taken notice. Wilfred Reilly, professor at Kentucky State University, a historically black college, tweeted that the “near-refusal of BLM to discuss Black-on-Black crime is one of the weirdest disconnects in politics.”

“If Black lives truly matter to Black Lives Matter incorporated, and the left in general, they would be marching in Chicago, St. Louis, Baltimore, Atlanta or any of these other cities with unacceptably high rates of violent crime and murder,” said Ken Blackwell, former U.S. Ambassador to the UN Human Rights Commission under President George H.W. Bush.

The near-refusal of BLM to discuss Black-on-Black crime is one of the weirdest disconnects in politics. Whenever I ask young Black men I mentor/speak to their biggest worry, it’s not Confed statutes or trans rights or even the cop on the beat, but “brothers killing brothers.”

In New York City, where city officials recently agreed to slash $1 billion from the $6 billion police budget, shootings were up 130% from the previous June and the murder rate rose by 30%, according to NYPD figures released Monday.

Given the lack of a BLM spokesperson, supporters such as CNN’s Don Lemon have been left to field questions as to why the movement has yet to agitate for young Black murder victims such as Secoriea Turner, 8; Royta De’Marco Giles, 8; Natalia Wallace, 7, or Davon McNeal, 11.

In a frank exchange Monday with actor Terry Crews, Mr. Lemon said “that’s not what Black Lives Matter is about” after Mr. Crews asked why the movement had been silent on the recent spate of Black victims.

“Black Lives Matter is about police brutality and about criminal justice,” said Mr. Lemon. “It’s not about what happens in communities when it comes to crime. People who live near each other, Black people, kill each other. Same as Whites.”

“When you look at the parents of these little kids who are saying, ‘Hey, man, why aren’t they speaking up for me, too?’” said Mr. Crews. “It’s about who is controlling the narrative. It’s got to be about all Black lives matter.”

A distraught Secoriya Williamson, the father of Secoriea Turner, drove home that point after the death of his daughter Secoriea Turner, who was killed by gunfire in a confrontation with protesters who have camped out at the Wendy’s where Rayshard Brooks was killed last month by an Atlanta officer.

“They say Black lives matter. You killed your own this time,” said Mr. Williamson at a press conference. “You killed my baby because she [was in a car that] crossed a barrier and made a U-turn? She’s a child. She didn’t do nothing to nobody.”

Chicago Mayor Lori Lightfoot blamed “way too many guns” for the recent surge in violence, as well as the pent-up restlessness after the novel coronavirus shutdowns, as well as “poverty, lack of hope, despair, not enough access to the things that we know build healthy and strong families and communities.”

Mr. Lemon also pointed to firearms. “The gun culture in this country is prevalent, but I don’t understand what that has to do with a movement that’s for equality for Black people,” he said.

Mr. Blackwell, a Black Republican who previously served as mayor of Cincinnati and Ohio state treasurer, noted that high Black-on-Black crime has long plagued urban areas, but it’s an “inconvenient truth” for progressive groups like Black Lives Matter as well as the Democrats who control most major cities.

“The problem is that Black Lives Matter incorporated would have to start dealing with the fact that many of the mayors and police chiefs in these cities are Black,” said Mr. Blackwell. “Their officers are representatives of the communities they serve.”

If Black Lives Matter went after the problem of Black violence, he said, “this advancement of this false narrative of problematic, systemic racism in police departments across the country would pale, and you would start having to hold accountable those folks that are in charge of those cities.”

The risk for Black Lives Matter is that the disconnect will tarnish the movement’s credibility at a time when its profile has never been higher. Millions of dollars have poured into BLM-affiliated groups, and the call to “defund the police” has resulted in a slew of major cities scrambling to divert funding from law enforcement to community services.

“I do think the extreme specificity of what BLM actually focuses on does or should hurt their credibility among serious people,” said Mr. Reilly in an email. “First, despite Don Lemon’s best efforts, I wouldn’t agree they DO say their primary focus is police brutality. The BLM website includes detailed passages dealing with everything from nuclear families (bad) to a ‘free Palestine’ (good).”

The original Black Lives Matter, founded in 2013 and now called the Black Lives Matter Global Network, has also advocated for the rights of Black immigrants and focused on “the egregious ways in which Black women, specifically Black trans women, are violated.”

One of the three co-founders, Patrisse Cullors, said in a 2015 interview that she and co-founder Alicia Garza were “trained Marxists.”

“Even if an anti-police or anti-police brutality message were consistently communicated, a very valid question would be: ‘Why is that the case?’” asked Mr. Reilly. “If there are 15 police shootings of unarmed Black people, and 15,000 murders of young Black and poor white men, every year, why does a movement focused on ‘Black Lives’ devote 99% of its attention to the first problem?”

As Mr. Crews put it, “Black people need to hold other Black people accountable. This is Black America’s version of the MeToo movement.”