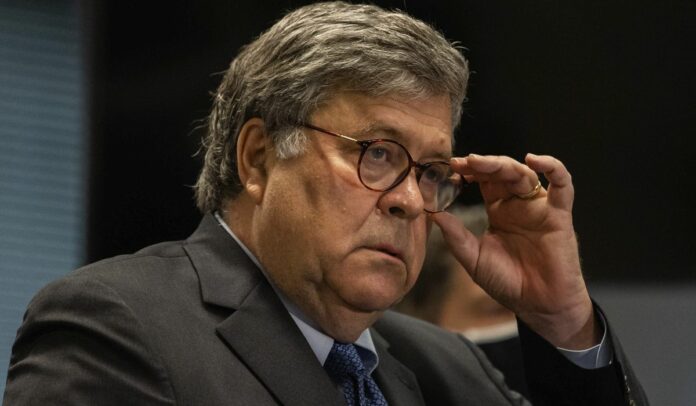 Attorney General William P. Barr went on the attack against Justice Department career prosecutors this week, comparing them to preschoolers and to accusing them of going rogue in trying to score political scalps.

The broadside came during a speech to honor Constitution Day in which Mr. Barr also made a vehement defense of his conduct as the country’s top cop and his absolute authority to make decisions about what cases move forward.

The speech quickly became a flash-point in the two-year battle between the attorney general and front-line prosecutors, who have bristled — and some even quit cases — as Mr. Barr and his top deputies inserted themselves into sensitive political investigations.

Both critics and supporters of the attorney general were shocked the friction erupted in such a public fashion in the speech late Wednesday night to students at Hillsdale College, a school with conservative ties.

“I never thought we would see a blow-up from him like this,” said Nick Akerman, a former assistant special prosecutor in the Watergate scandal who called the speech “totally unprecedented.”

“There is no reason for him to go after the line prosecutors because he is doing whatever he wants regardless,” he said. “I don’t think this does more than confirm what we already know: that he is an arm of the Trump reelection campaign.”

Mr. Barr assailed prosecutors as part of the “permanent bureaucracy” and said they must follow the directives of politically-appointed leaders such as himself who, because they are nominated by a president and confirmed by the Senate, are accountable in the grand scheme of governance.

“Name one successful organization or institution where the lowest level employees’ decisions are deemed sacrosanct — there aren’t any,” he said. “Letting the most junior members set the agenda might be a good philosophy for a Montessori preschool, but it is no way to run a federal agency.”

The attorney general said he, not career prosecutors, has the final say in cases and he will not “blindly” submit to “whatever those subordinates want to do.”

“They do not have the political legitimacy to be the public face for tough decisions and they lack the political buy-in necessary to publicly defend those decisions,” Mr. Barr continued.

“I think ultimately those decisions rest with the attorney general of course, but you expect the attorney general to follow certain norms,” he said. “Barr has gone off the reservation with these norms. At the end, he has the authority to run the department like he sees fit and he’s politicized it.”

But former Attorney General Edwin Meese III said Mr. Barr is using his authority to clean up the department, which was dogged by accusations of political partisanship by Obama-era officials, including doctoring a secret surveillance warrant and opening an investigation into the Trump campaign in part based on Democratic opposition research on the Republican nominee.

Mr. Meese suspects Mr. Barr has made similar remarks privately to his prosecutors.

He said Mr. Barr’s speech was designed to reassure the public he’s working to fix problems that have tainted the department.

“You had a real cesspool that had to be corrected,” he said. “[Former Attorney General] Jeff Sessions started the path of cleaning up the Justice Department and I think Bill Barr is continuing that.”

Disagreements between politically appointed Justice Department officials and trial attorneys are nothing new. But earlier this year, two such spats quickly became public and then morphed into a political firestorm.

In February, all four federal prosecutors who worked on the case against longtime Trump associate Roger Stone abruptly withdrew after the department’s leadership reduced the recommended sentence of up to nine years in prison for obstructing a congressional probe and other crimes.

One of the Stone prosecutors later resigned from the Justice Department altogether.

Months later, Mr. Barr moved to end a three-year prosecution against former National Security Advisor Michael Flynn, prompting one of the prosecutors to remove himself from the case.

Mr. Barr has also angered federal prosecutors in Manhattan with the botched firing of former U.S. Attorney Geoffrey Berman. Mr. Barr pressured Mr. Berman to resign, but the prosecutor resisted. Mr. Trump ended up firing Mr. Berman, and he left office after Mr. Barr relented and named his deputy as his interim successor.

In the speech, Mr. Barr said he is the final authority in the department and is allowed to make those prosecutorial calls.

“What exactly am I interfering with?” Mr. Barr asked. “Under the law, all prosecutorial power is invested in the attorney general.”

He said some prosecutors seem to seek opportunities to “amass glory” by criminally charging high-profile people.

“I’d like to be able to say that we don’t see headhunting in the Department of Justice,” he said. “That would not be truthful. I see it every day.”

Sen. Richard Blumenthal, Connecticut Democrat and a member of the Senate Judiciary Committee that has oversight authority over the Justice Department, called the attorney general “a disgrace.”

“As a former Department of Justice employee, I take personal offense to his demeaning comments about the skilled, dedicated public servants who work in our federal justice system,” Mr. Blumenthal, a former U.S. Attorney, said in a statement to The Washington Times. “Unlike Bill Barr, the line prosecutors, investigators, and federal agents I worked beside as U.S. Attorney — and know still — believe in equal justice under the law. A justice system free from political corruption is clearly not only a foreign concept to Bill Barr, but an anathema.”

“Though dangerous, Barr is becoming increasingly absurd. When I was at DOJ — regardless of my ultimate authority — I saw the career staff as trusted colleagues, not pre-schoolers. To my friends at DOJ, know that this nation values and supports you. I do,” he wrote in a tweet.

Mr. Holder himself has been accused of politicizing the Justice Department on grounds analogous to those now being aimed at Mr. Barr, including referring to himself as President Barack Obama’s “wing man.”

He also was criticized for partisan handling of cases on such matters as religious freedom, abortion clinic access, the “Fast and Furious” operation, voter-intimidation by Black activists, “sue and settle” environmental cases, and selective non-defense of duly-passed laws.

Anger at Mr. Barr pervaded Democrats on Capitol Hill on Thursday. But since the attorney general wasn’t present, lawmakers instead unloaded on FBI Director Christopher Wray, who was there to testify on threats to the homeland.

“We have seen increasing politicization of the Justice Department,” said Rep. Dina Titus, Nevada Democrat. “This has crossed a long-standing line. We don’t usually expect or see or tolerate this sort of thing from our nation’s law enforcement.

Rep. Bonnie Watson-Coleman, New Jersey Democrat, asked Mr. Wray to use his influence with Mr. Barr to “ask him to stop spreading such misinformation about voting integrity.”

Rep. Val Demmings was angered by Mr. Barr’s vision of power flowing from him through the rest of the department — and particularly his jab at rogue FBI agents. “Whose agents do you think you are,” the attorney general said in his remarks this week.

“We, the FBI, work for the American people,” the bureau director said.