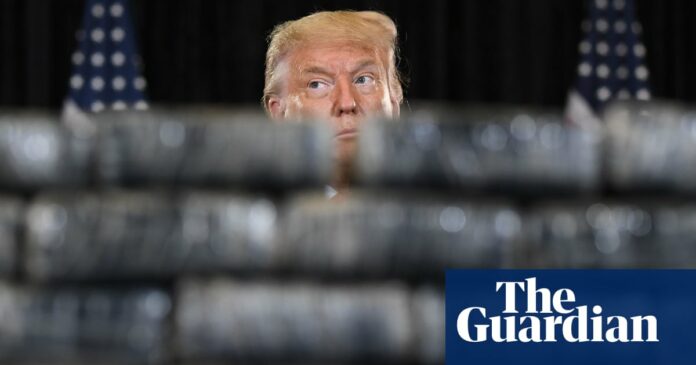 Hispanic supporters of Donald Trump sat around the cabinet table, lavished him with praise and promised: “We will rebuild America with you, and we will make America great again.” For a moment, in his self-affirming White House bubble, it seemed the US president remained master of his destiny.

But when reporters questioned him, Trump answered only one. Then he was done. A White House staffer bellowed forcefully at the assembled media: “Let’s go! Let’s go! Keep going! Let’s go! Come on, we’re done! Let’s go!” It was a sign of how the president has become less indulgent of unfriendly media questions than when he thought he was riding high.

Trump is in trouble. The coronavirus has killed more than 130,000 Americans, tens of millions of people have lost their jobs and there has been a tectonic cultural shift for racial justice. Opinion polls suggest he is the worst-placed incumbent since Jimmy Carter was hammered by Ronald Reagan in 1980, leaving his Republican party somewhere between anxiety and panic about November’s elections for the White House and Congress.

“The mood is like probably what it felt like when you were on the Titanic,” said Joe Walsh, a former congressman from Illinois. “These cowardly Republicans in the Senate and House know Trump’s going to get destroyed in November but they’re tied to him and they’re gonna go down with him and they have no choice, and I think they realise that.”

The sinking ship metaphor comes up again and again among Republicans interviewed by the Guardian and other media outlets.

Biden leads Trump by 52% to 40% in a Guardian/Opinium Research poll conducted in late June. Numerous other polls agree the Democrat has a double-digit lead and, crucially, put him ahead in six battleground states. Two in three people now disapprove of Trump’s handling of the pandemic, according to an ABC News/Ipsos poll, with the percentage of Republicans who approve sinking from 90% in mid-June to 78% now.

Nothing is going right for the president. A campaign rally in Tulsa, Oklahoma, last month was a flop with thousands of empty seats. Another rally planned for Portsmouth, New Hampshire, on Saturday night has been postponed due to weather. From his basement, Biden has outraised Trump in fundraising for the past two months in a row.

The president has even failed to brand his opponent with a pejorative nickname that sticks.

Amy Walter, national editor of Cook Political Report, wrote this week: “This election is looking more like a Democratic tsunami than simply a blue wave … Republican strategists we’ve spoken with this week think Trump is close to the point of no return. A couple of others wondered if Trump had reached his ‘Katrina’ moment: a permanent loss of trust and faith of the majority of voters.”

She added: “In talking with strategists on both sides last week, it’s also clear that Trump is dragging Republican congressional candidates with him as well.”

Indeed, Republicans realise they could lose everything, with the presidency and Senate following the House of Representatives, which they surrendered in 2018. The Senate is critical. If Republicans can retain their majority, they will be able to obstruct significant parts of the Democratic agenda, just as they did for much of Barack Obama’s presidency.

Walsh, who unsuccessfully challenged Trump for the 2020 Republican nomination, said: “I can tell you, publicly and privately conversations I’ve had, they’re scared shitless, all of them, any Senate Republican on the ballot. I mean, forget about Colorado, it’s done. Arizona is done. I think Maine is done. Joni Ernst in Iowa is almost done. Every race is going to be competitive. Democrat Doug Jones has got a fighter’s chance of winning in Alabama. Lindsey Graham is in serious trouble and they all know it.”

It is an astonishing turnaround in less than a year as the political and business worlds have lost confidence in Trump. A Citigroup poll of 140 fund managers last December found 70% expected him to win re-election, but last week 62% said they expect Biden to prevail. That once-impenetrable Republican strongholds such as Arizona, Iowa and South Carolina are now in play is a measure of how much has changed.

Tara Setmayer, a former Republican communications director on Capitol Hill, said: “The people who pay attention to the numbers internally are very worried and they’re spending money in places that they never imagined they’d have to allocate resources like New Hampshire, like Georgia, like South Carolina.

“Politics on a national level is a numbers game. When you have to start spending money in states that were reliably red one cycle ago, you’re in trouble. Clearly Trump is haemorrhaging support in areas that he needs to win again. His margin of victory was so narrow last time that he cannot afford to lose anyone, so the alarms are definitely sounding within the Republican party despite Donald Trump’s proclamations on Twitter that he has overwhelming Republican support.”

Will Republicans finally disown Trump in an attempt to save themselves? Collins has refused to say how she plans to vote in November, telling the New York Times that she will not campaign against Biden, a former Senate colleague. She is also among several senators who have said they will not attend next month’s Republican national convention to renominate Trump in Jacksonville, Florida.

Elaine Kamarck, a senior fellow in governance studies at the Brookings Institution thinktank in Washington, argues that with every drop in the polls, the cracks in the Republican party grow bigger. “What generally happens in a situation like this is that people just start going their own way,” she said.

“They just start differentiating themselves from an unpopular president. They start saying, ‘I work with Democrats,’ or ‘I don’t agree with everything the president says’. They start signalling to the electorate that they’re different. If the trends keep going as they have, the ultimate messaging will be: vote to keep the Senate Republican so we can protect against the worst policies that Joe Biden might try to enact.”

But there are more than three months until election day. Trump’s base remains fervent. His campaign argues that in this year’s Republican primaries he has set a record for most votes ever cast for an incumbent president. And he defied the party’s prophets of doom in 2016.

Tim Miller, former communications director for Jeb Bush and ex-spokesman for the Republican National Committee, recently interviewed nine campaign consultants for Republican candidates in Senate and House races for Rolling Stone magazine. Although the unnamed individuals expressed views such as “Every shred of evidence points to a likely ass kicking in the fall”, Miller writes, support for Trump remains “steadfast”.

“What I found in their answers was one part Stockholm syndrome, one part survival instinct,” he explains. “They all may not love the president, but most share his loathing for his enemies on the left, in the media, and the apostate Never Trump Republicans with a passion that engenders an alliance with the president, if not a kinship.

Responding to the Rolling Stone article, Setmayer, host of the Honestly Speaking podcast, said: “It was disheartening to hear that because for those of us who are on the other side of this we’re like, ‘Come on! How much more are you going to take? Are you going to get off the ship or what? You’ve still got a chance here.’ It doesn’t look like they’re going to do that.

“They may go down with the ship because they feel as though the party faithful are so locked into Trump that they have zero chance if they separate themselves. That’s the calculation.”

There was little evidence of mask-wearing or physical distancing at the White House on Thursday. Nor, even now, does McConnell seem likely to politically distance himself from Trump in a last-ditch bid to hold on to the Senate. Setmayer added: “The shotgun marriage of the Republican party and Trump is so far gone at this point it would be virtually impossible for party leaders to outright reject him.”