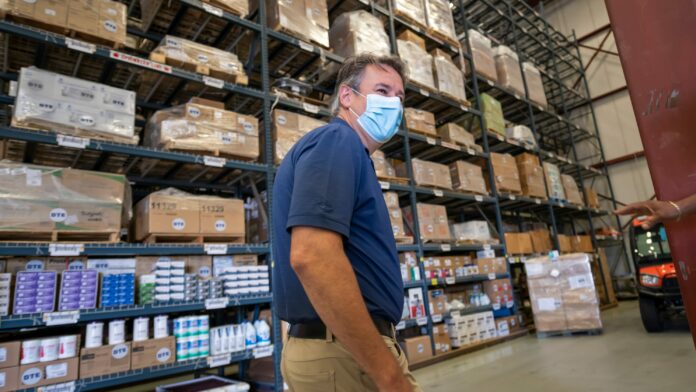 Detroit — The ceiling of DTE Energy Co.’s warehouse is 60 feet high, and Tony Tomczak has personal protection equipment stacked to within a few feet of it.

“We’re not done,” said Tomczak, whose weighty titles at DTE include chief procurement officer. Not done with COVID-19, and not done with scrambling for equipment, even if he’s past the time when his CEO assigned him to track down 3.5 million masks and he practically had to look in the sofa cushions.

“There are still as many unknowns as knowns,” said Bob Riney, Henry Ford’s president of health care operations and COO. How long will the need be critical, the peaks uncertain, the supply chains stretched across oceans?

The only thing certain is that a surge is coming — and it’s not the obvious one. If cases spike the way some experts are predicting, that will make two.

The COVID-19 numbers are already tracking in the wrong direction in places like Florida and Arizona, and Centers for Disease Control and Prevention Director Robert Redfield predicted that “the fall and the winter of 2020 and 2021 are going to probably be one of the most difficult times that we experienced in American public health.”

Between the coronavirus and the flu, he told a Journal of the American Medical Association webinar, “keeping the health care system from being overstretched, I think, is really going to be important.”

But that’s supposition. What’s inevitable, say people like Tomczak and Riney, is that as more Americans go back to work or school, items that have leaped from irrelevant to irreplaceable will be in fierce demand.

The upside, they say, if there is one in a pandemic: more and more of the demand will be met by domestic factories.

The earliest of more than 137,000 COVID-19 fatalities in the United States were registered in February. By April, medical workers in some areas were wearing trash bags, raincoats or even snorkeling equipment because hospitals ran out of proper gowns and masks.

Even now, wipes and hand sanitizers are as rare at supermarkets as beluga caviar. The same N95 mask that cost $1 on eBay in December sells for multiples of that today. Items once valued mostly in health care and manufacturing have become household staples. A woman piloting an ice cream truck through the Grosse Pointes this summer has been wearing a facial shield.

Late last week, Beaumont Health’s self-report on the State of Michigan coronavirus website listed more than three weeks’ worth of shields, but it was low on surgical masks and gloves.

A few weeks earlier, said senior supply chain vice president Melanie Fisher, the issue was one of the many things the public would never consider, or even notice — probe covers for oral thermometers.

“We are now not only focused on our daily demand, as we were prior to COVID-19, but also planning for a potential next surge to ensure we have adequate supplies on hand,” Fisher said. Amid a relative lull, “we can focus on how we can work with our manufacturer partners on the path forward to better mitigate disruption in the future.”

On the national level, Rear Adm. John Polowczyk, who oversees the federal allocation of PPE, conceded to the Washington Post that “I’m not going to tell you we’re able to meet all demand.”

He said there are far fewer unfulfilled orders than in April, however, and “I have not found a hospital system that is in threat of running out … I don’t have the sense of there being severe shortages.”

Other reports have been less reassuring. At a hospital in Houston, doctors have been told to reuse N95 masks for two weeks. In St. Petersburg, Florida, a hospital is issuing only one surgical mask per worker per day.

The union and advocacy group National Nurses United said it surveyed members who were treating COVID-19 patients in June, and 85 percent of respondents said they have to reuse their disposable N95s.

Michigan Medicine, the University of Michigan’s system, reported a 21+-day-supply of N95s Friday, but it acknowledged having less than a week’s supply of gloves and shields.

“We are constantly monitoring our supplies and conducting forecasting to make sure we remain prepared for the demand,” Michigan Medicine spokeswoman Mary Masson said. “Our supply chain team is continually looking for additional sources for supplies.”

One new player hails from Harbor Beach, along Lake Huron in the Thumb.

National Filters works with marine engines and hydraulic lines. After the state reached out in March, it began making surgical masks, not the ones available at gas stations but the polypropylene spunbond type suitable for operating rooms.

Company president Todd Raines said he has added production lines in Michigan and Florida, with more coming. National Filters is churning out 3 million masks per month, headed toward 11-12 million — “and that’s only a fraction of a percent of what’s required per year, even pre-pandemic.”

Before the springtime crisis, he said, about 30% of surgical masks used in the U.S. were made here. That number is rising, he said, along with demand.

“I’ve started to get contacted by schools in the last few weeks,” he said. “We’re hesitant to commit. We’re not completely sure what’s going to be happening.”

Raines said he has found domestic suppliers for his materials. Henry Ford’s Riney said that’s an underappreciated key to whatever the future holds.

“The entire world is using these supplies at massive levels,” he said. “We have to make sure we have the raw materials to produce them,” even — or especially — if it means inventing alternatives.

“We’ve struggled for a couple of decades to find meaningful work for people who want to work in manufacturing. It excites me that we might be able to reopen some lanes for people.”

A typical pre-coronavirus day required less than 1/20th of that.

At DTE, Tomczak said he grew wary in December when he saw early reports about the virus in China.

“We’re a company where we have to be ready,” he said.

But he had no way of knowing he would need four sizes of nitrile gloves, Clorox and Super Sani Cloth wipes, fire retardant masks for the linemen working near hot wires, Fogtech DX instant wipes to clear mask-induced haze from goggles, and hazmat suits for workers who need to solve problems in the homes of COVID-19 patients.

Tomczak said he was about to sit down to dinner on March 19 when CEO Jerry Norcia called with a request: he’d like 3.5 million masks, most of them to distribute to hospitals and first responders, and he’d like them in a week.

That last part was impossible. It took a few weeks. But shaking every available tree, meeting airplanes at the gate and fending off charlatans who promised absurd quantities or wanted full payment upfront, he and his team found millions of masks and other items when they’d been struggling to find thousands.

“Go pick it up. Put your hands on it,” he’d tell his team. For one load of infrared thermometers, “when no one had them,” he sent a truck to Florida and gave the driver a supply of AA batteries.

Was this a scam? The driver pulled random thermometers out of multiple boxes, popped in the batteries and tested them.

The first 2,000 masks went to the Detroit Police Department, via the DTE Foundation. Later, boxes of masks, gloves and hand sanitizer, a fresh focus for Atwater Brewery, Griffin Claw Brewing and Detroit City Distillery, were dispersed to 6,000 small businesses.

The masks proved crucial for Beaumont and Henry Ford.

“I had DTE executives personally deliver boxes,” Riney said. Now he has expanded his stockpile from 10 days’ worth to 10 times that, and at DTE, Tomczak has cartons upon cartons from manufacturers he hadn’t known existed.

They’re stacked on shelves that reach to the rafters, and he just ordered another 600,000 masks from National Filters.

Truth is, Tomczak said, when the CEO called, “I didn’t think we could do it.”

He learned otherwise, and he learned something vital along the way: “We should never be in that position again.”