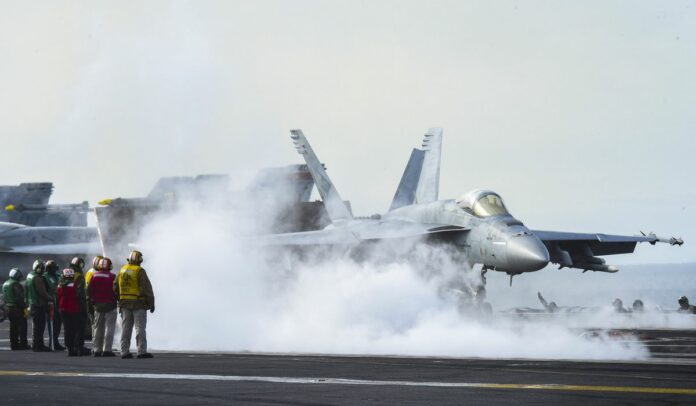 The USS Gerald R. Ford is a massive, gray-hulled city on the sea. Powered by two nuclear reactors, it is longer than three football fields and displaces 100,000 tons. When the air wing is attached, the Ford provides a base for dozens of jets and helicopters and more than 4,500 sailors.

But it was conceived as far more than just another Navy aircraft carrier, and that’s where the Navy problems start.

The Ford was envisioned as a revolutionary leap forward with technological advancements undreamed of when its Nimitz-class predecessors were launched decades ago.

But the ship, the first in the Ford class of supercarriers, has been plagued with a series of mechanical problems that have pushed its price tag into the stratospheric $13 billion range. The Gerald R. Ford has been in the fleet for almost three years but has yet to deploy on a single mission.

The Ford, the first of three planned supercarriers, incorporates systems such as an advanced arresting gear and the electromagnetic launch system (EMALS), a replacement for the hydraulic catapults that have flung fighter jets off carrier decks for decades.

The ship is well into its post-delivery tests and trials. Crucial shock trials, which will assess how the USS Gerald Ford stands up to underwater explosions, are scheduled for the next fiscal year.

With the technological challenges, the Navy has made personnel shake-ups. It recently sacked Ford program manager Capt. Ron Rutan and replaced him with the officer who oversaw development of the amphibious transport dock.

“We must ensure that the team takes the opportunity to recharge and allow for fresh eyes on upcoming challenges as required,” a spokesman for Naval Sea Systems Command said. “While there is no perfect time for leadership transitions, it is prudent to bring in renewed energy now to lead the [USS Gerald Ford] team through the challenges ahead.”

The new manager, Capt. Brian Metcalf, had been serving as the executive assistant to Vice Adm. William Galinis, commander of Naval Sea Systems Command, the largest of the Navy’s five system commands.

The COVID-19 crisis has affected missions, deployments and recruiting at the Pentagon, but Navy officials say the push to get to Ford to sea has not let up.

“Even in the face of a global pandemic, the team has kept a lightning pace, and we will continue to do so … until the USS Gerald Ford completes her post-delivery obligations and is fully available and ready for tasking by the fleet,” NAVSEA officials said.

Jerry Hendrix, a retired U.S. Navy captain and military analyst, said the most glaring problem is that the Ford is the wrong ship for its most likely mission. The Pentagon is in the midst of a major mission shift, announced in 2018, from a focus on terrorism and nonstate groups such as the Islamic State to a more traditional targeting of nation-state rivals, particularly China.

Designed to operate in a relatively low-threat environment such as the Arabian Gulf, the carrier is ill-suited “for implementing the current National Defense Strategy, which focuses on great-power competition,” Mr. Hendrix wrote in an essay in National Review.

He advocates midsized carriers that would be less technologically complex and far more affordable to build in larger numbers.

“The Navy says it needs carriers to deter enemies and win wars. It should move rapidly to a new design that can fully support the National Defense Strategy by efficiently doing both,” Capt. Hendrix wrote.

“Everybody buys into the fiction of the early promises. A lot of the promises that are made are overly optimistic in terms of what technology can deliver on schedule and certainly on budget,” Col. Wood said. “They buy into the very optimistic projections that technologists and futurists will convey.”

The Government Accountability Office, the congressional watchdog, concluded in a recent assessment of the Ford that the Navy is struggling to demonstrate the reliability of key features such as the electromagnetic launch system and the advanced arresting gear, or AAG.

“Although the Navy is testing EMALS and AAG on the ship with aircraft, the reliability of those systems remains a concern,” the report states. “If these systems cannot function safely by the time operational testing begins, [the USS Gerald Ford] will not be able to demonstrate it can rapidly deploy aircraft, a key requirement for these carriers.”

In September, the Navy increased the Ford’s cost cap by $197 million to $13.2 billion in part to correct persistent breakdowns in the ship’s advanced weapons elevators, the third cost boost since 2017. None of the elevators between the main deck and the lower decks is operational, the GAO noted, which means they are still incapable of bringing munitions to the flight deck.

The Navy and the shipbuilder, Huntington Ingalls Industries, are well aware of the problems with the Ford, Col. Wood said. He called it a “first in class” problem for a ship consciously conceived to break the familiar mold. Because of tight funding, for example, the Navy decided to forgo a full-scale model before beginning ship construction.

“The Gerald Ford is not only an operational carrier; it’s also a test bed,” he said. “You’re testing things that haven’t been fully matured. It’s a voyage of discovery.”

The Ford is not the first weapon system to have a painful and expensive birthing process, he said, but the USS Nimitz, namesake of the current class of aircraft carriers, was launched in 1972.

“Your current aircraft carriers are rapidly aging,” Col. Wood said. “These things were designed decades ago for another era.”

He is confident that, like other expensive and controversial weapon systems that eventually gain acclaim, the Ford will eventually prove its worth as a supercarrier in its own right and as a prototype for those that follow.

“We just have to get through this rough period where they’re working out the technology problems,” he said.

He acknowledged criticism that Chinese and Russian anti-ship missiles could pose threats to carriers but noted that land-based airstrips, such as Andersen Air Force Base in Guam, are completely static.

The Ford “is 1,000 feet long. That is massive, but relative to the Pacific Ocean, that’s nothing,” Col. Wood said.

Developing a defense strategy requires some amount of trade-offs and compromises. A smaller and less technologically advanced aircraft carrier would be less expensive than those in the future Ford class, Col. Wood said, but it could also be more vulnerable to an enemy and less able to mount an overwhelming attack.

“There is no perfect solution,” he said.