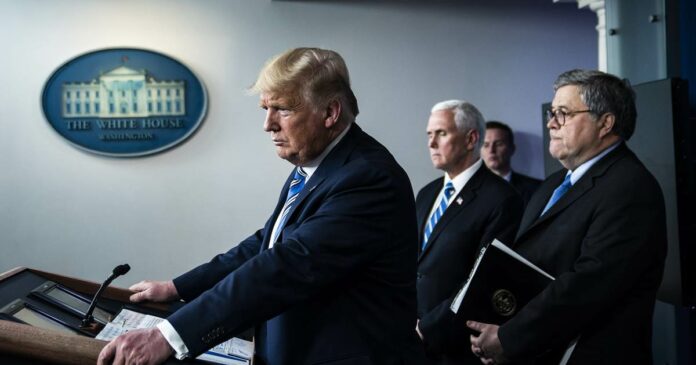 WASHINGTON — On Tuesday afternoon, President Donald Trump will resume those daily coronavirus press briefings he held in March and April.

The decision to fire up those briefings again comes after slipping poll numbers for the president, after more than 140,000 Americans have died from the virus (including some 80,000 since Trump’s last briefing in April), and after Sunday’s 5,000-word New York Times look into how Trump gave up his leadership role on the issue.

But it’s one thing to restart the briefings. It’s another to regain the public’s trust on the coronavirus.

According to the online NBC News|SurveyMonkey weekly tracking poll on social, health and economic matters, 68 percent of adults say they trust their governor more than Trump when it comes to reopening businesses in their area.

By comparison, just 26 percent say they trust Trump more than their governor.

And that trust deficit comes as:

And Trump’s trust deficit comes as he’s fired off seven tweets this morning (as of publication time), and only two of them having anything to do with the coronavirus.

“Thank you for the good reviews and comments on my interview with Chris Wallace of @FoxNews. We may have set a record for doing such an interview in the heat. It was 100 degrees, making things very interesting!”

“Looking forward to live sports, but any time I witness a player kneeling during the National Anthem, a sign of great disrespect for our Country and our Flag, the game is over for me!”

“You will never hear this on the Fake News concerning the China Virus, but by comparison to most other countries, who are suffering greatly, we are doing very well – and we have done things that few other countries could have done!”

And we have more poll numbers for you this morning — on the issue of race in America.

Among the findings from our new batch of numbers in the latest NBC News/WSJ poll:

Data Download: The numbers you need to know today

3,855,155: The number of confirmed cases of coronavirus in the United States, per the most recent data from NBC News and health officials. (That’s 61,711 more cases than yesterday morning.)

46.47 million: The number of coronavirus tests that have been administered in the United States so far, according to researchers at The COVID Tracking Project.

$2.1 trillion: The price tag on a deal clinched by the European Union for a budget and coronavirus recovery.

Just 23 percent: The share of Americans in a new NBC|SurveyMonkey poll who called the current state of the U.S. economy “good” or “excellent.”

52 percent: The share of voters who now say it is appropriate for an athlete to kneel during the national anthem to protest racial inequality, per a new NBC News/WSJ poll.

Hundreds of protesters in yellow – “the Moms” – have arrived outside of the County Justice center in Portland. They stand, arms linked, to protect their community. One mother told me their issues can be solved at the local level & that the feds have no place here. pic.twitter.com/DCDYgYmuxE

Appearing on Joy Reid’s new MSNBC show, “The ReidOut,” Joe Biden said that he has four African-American women on his VP short list, but didn’t commit to picking one as his running mate.

“I am not committed to naming anybody but the people I have named and among them are four black women. So, that decision is under way right now,” he said.

A campaign official stressed to NBC’s Mike Memoli and Marianna Sotomayor that there are CURRENTLY four Black women on the shortlist, pointing out that Biden “went on to say the process continues, so that wasn’t definitive.”

The Trump campaign is doubling (tripling? quadrupling?) down on its tough-on-crime strategy with a new ad that envisions an elderly woman being attacked by a home invader. As the masked person breaks in, the woman’s television plays news about proposals to cut police budgets and a misleading Fox News clip claiming Biden supports defunding police.

The spot is striking, and it plays right into the Trump campaign’s attempts to argue that the country would descend into chaos under Biden. But recent polling shows that it’s Biden with a 9-point lead on the question of who American adults trust more to handle crime and safety.

Stuck in the middle with you

Despite a promise that the GOP’s Senate coronavirus relief package is coming soon, negotiations between the White House and Senate Republicans are stuck as the president is demanding a payroll tax cut is included in the bill, and that funding for testing is reduced or zeroed out, NBC’s Hill team reports.

South Dakota Sen. John Thune said a payroll tax cut isn’t “something that changes anyone’s behavior” and said that he’s “not a fan of that.” But the White House might think that some of these negotiations are already done. The president’s chief of staff, Mark Meadows, said the payroll tax cut is “part of the proposal,” and Treasury Secretary Steven Mnuchin said “it’s in the bill.”

And when it comes to testing, high ranking senators are publicly pushing back against the president’s wishes. Senate Health Committee Chair Sen. Lamar Alexander said “we should fund testing as generously as it needs to be funded.” And Missouri Sen. Roy Blunt said “I just think that’s wrong” when it comes to cutting testing funds.

Don’t miss the pod from yesterday, when we did a deep dive into voter enthusiasm for the fall.

ICYMI: What else is happening in the world

Georgia Democrats have picked the leader of the state party to replace Rep. John Lewis on the ballot in November.

The sheriff of Jacksonville, Fla., says he can’t provide security for the Republican National Convention because the planning is so unclear.

Centrist Democrats are giving Biden a lot of running room on spending and the national debt, should he be elected.

A group of more than 250 Asian Americans and Pacific Islanders have endorsed Joe Biden.