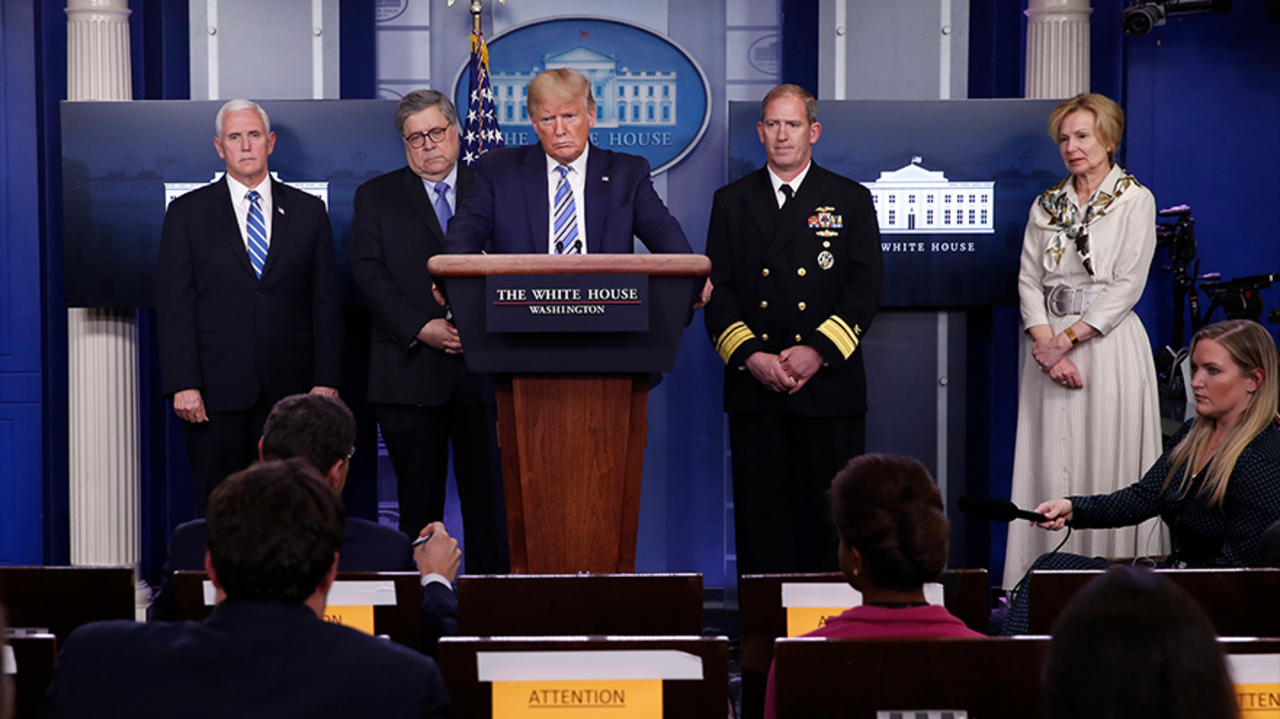 Get all the latest news on coronavirus and more delivered daily to your inbox. Sign up here.

President Trump announced on Thursday the White House’s plan for eventually rolling back social distancing measures and reopening the country’s economy in several phases — depending on location — amid the coronavirus pandemic.

The plan calls for three phases to reopening the country, based on the severity of the coronavirus outbreak in each individual state or region.

The plan, which Trump announced along with the formation of a bipartisan council of lawmakers from both chambers of Congress, outlines “recommendations” for governors to develop their own plans to reopen. It also includes a number of criteria that must be met in terms of numbers of infections and hospitalizations before they can open up.

The “Opening Up America Again” plan was signed off on by the president’s medical advisers, Dr. Deborah Birx, Dr. Anthony Fauci and Dr. Robert Redfield, and will be a “data-driven” approach with governors taking the helm in deciding, down to a county-level, how they will reopen their states, the White House said.

“We are not opening all at once, but one careful step at a time,” Trump said, adding that the guidelines were “based on hard verifiable data.”

He added: “Some states will be able to open up sooner than others.”

“Phase One” is for areas of the country who solely satisfy the criteria laid out by the White House and calls for social distancing to remain in place, avoiding gathering of more than 10 people, and avoiding any unnecessary travel.

“Phase Two,” which is for regions that have met the criteria twice and have not seen “a rebound” in infections, still calls for residents to practice social distancing and try to avoid large gathering but opens up the possibility of resuming non-essential travel.

The third phase, which is for areas who have met the criteria three times and have no rebounds of the virus, is the most open and allows vulnerable parts of the population to go back in public, opening back up gyms and bars, resuming full-time staffing at worksites and letting people head back to large venues like restaurants, movie theaters, churches and sports venues – albeit at a reduced capacity.

“This is a gradual process,” Trump said. “Throughout the process, citizens will still be called on to use all the weapons in this war.”

Trump said that he has already spoken to governors of some western states who say they have already met the criteria in “Phase One.” The president, however, did not specify which states were set to open back up.

“I heard from a number who said they are in very good shape,” he said. “They will be ready to open literally tomorrow.”

The White House guidelines come amid a tempestuous week in which protestors across the country descended on state capitals to express their anger over the effects the lockdown measures were having on the economy despite thousands of new cases of COVID-19 being reported every day.

SOURCES BELIEVE CORONAVIRUS OUTBREAK ORIGINATED IN WUHAN LAB, AS PART OF CHINA’S EFFORTS TO COMPETE WITH US

On Wednesday, hundreds of cars, trucks and SUVs descended on Michigan’s state capital as part of a noisy protest against Democratic Gov. Gretchen Whitmer’s social-distancing restrictions that critics say have gone too far. Similar protests occurred in Virginia, Wyoming, Kentucky and Ohio over the last week with more planned in Maryland, Missouri, Wisconsin, Pennsylvania, New York and New Hampshire.

The federal government said on Thursday that 5.2 million more Americans applied for unemployment benefits last week, bringing the four-week total to about 22 million out of a work force of 159 million — easily the worst stretch of U.S. job losses on record. The losses translate to about 1 in 7 workers.

“Those people that know they’re vulnerable, self-quarantine. And everybody else, let them go back to work,” said Aaron Carver, a laid-off housing contractor who joined a protest outside the governor’s mansion in Richmond, Virginia, to decry what he said was the government’s trampling on people’s rights.

Trump sympathized with the protestors during his briefing Thursday and refused to admonish them from gathering during the pandemic – noting that “they seem to be protesters who like me and respect my opinion.”

“They’ve been going through it a long time,” he said. “They’re suffering.”

Trump’s plan also comes just days after the president claimed to have “total” authority Monday to decide how and when to reopen the economy – leading to widespread pushback from governors in both major political parties who argue they have primary responsibility for ensuring public safety in their states and would decide when it’s safe to begin a return to normal operations.

Trump has since walked back that claim and said he would leave it to governors to determine when and how to revive activity in their states.

“The governors are responsible,” Trump said. “They have to take charge.”

Numerous states across the nation have already begun developing plans on how to reopen and forming regional coalitions to determine how best to get their economies back up.

The governors of California, Oregon and Washington said health outcomes and science, not politics, would drive decision-making ono when to reopen. Any modifications to each state’s stay-at-home order will be grounded in a comprehensive understanding of the health impacts of COVID-19, they added, saying no large-scale reopening will take place until metrics reflected a significant decline in the spread of the virus.

A number of states in the Northeast – including New York, which has been the epicenter of the COVID-19 pandemic in the U.S. – announced a similar plan on Monday as have seven states in the Midwest.

Fox News’ Brooke Singman and The Associated Press contributed to this report.