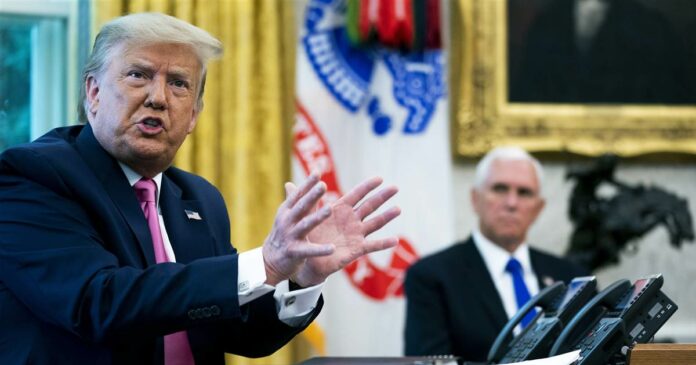 WASHINGTON — President Donald Trump is throwing a big wrench into negotiations between the White House and Senate Republicans over the next coronavirus relief bill by demanding a payroll tax cut be included and funding for testing be reduced or cut completely.

“Not a fan of that, I’ve made that pretty clear,” Sen. John Thune of South Dakota, the second-ranking Republican in the Senate, said of the payroll tax cut proposal. “I don’t think it’s something that changes anyone’s behavior and has trust fund implications. I just think there are better ways to do it.”

Republicans are trying to get on the same page before they start negotiating with Democrats before they leave for a month-long August recess.

Republican senators also denounced any attempt by the White House to cut funding for coronavirus testing.

“My view is, we should do whatever we need to do to make sure we have adequate tests,” Republican Sen. Lamar Alexander of Tennessee, chairman of the Health Committee, said. “All roads to open school, opening, going back to work, child care, lead through testing.

Mnuchin said that funding for schools is coming in at more than $70 billion and that might be allocated for schools that reopen.

McConnell on the Senate floor called his not-yet-finalized proposal “a good starting place” and said it could be released “as soon as this week.”

Mnuchin and Meadows met with Senate Majority Leader Mitch McConnell and House Minority Leader Kevin McCarthy at the White House earlier Monday. They met with Alexander and Sens. Roy Blunt of Missouri and Richard Shelby of Alabama Monday evening on a variety of proposals — specifically a way forward on school funding.

The White House negotiators will be back on the Hill on Tuesday to brief all Senate Republicans as well as House Speaker Nancy Pelosi and Senate Minority Leader Charles Schumer on the other side of the Capitol.

Here’s where negotiations stand as of Monday night:

Payroll tax cut: Trump and the administration will have a lot of convincing to do among skeptical Senate Republicans who are less than committal to the idea of a payroll tax cut.

Sen. John Cornyn of Texas called it “problematic,” while Sen. Charles Grassley of Iowa said “It might create political problems but it creates a public relations problem.”

But White House officials assured reporters in the Capitol that the proposal is already in the bill.

“That plans to be in it… I mean, that’s part of the proposal,” Meadows stressed. “It’s in the bill,” Mnuchin said.

Thune gave the proposal a reality check: “I would say that it is a big priority, as you know, for the President. And so his advocates Mnuchin and Meadows and others, I think, will probably try and ensure that it’s at least included in the first draft. Put it that way,” Thune said, laughing.

Sen. Lindsey Graham of South Carolina told NBC News he does support the tax cut being “means-tested.” Asked what other senators in his conference support it, Graham laughed and said “Good question.”

Funds for testing: Senate Republicans are pushing back on the administration’s idea to cut funding for coronavirus testing.

“Well, I think that’s a that’s going to be a priority for our members, for sure,” Thune said. Alexander told reporters “I believe that we should fund testing as generously as it needs to be funded.”

Blunt, who has been working with Alexander to increase testing capabilities, told reporters “I just think that’s wrong” to cut funding, citing a new rapid test the National Institutes of Health is working on that will need increased funding in the next bill. “It’s going to take more money to quickly focus in on those tests and have them ready, by the time, hopefully, by the time school starts,” he said.

Meanwhile, Meadows told reporters “How would they even know what funding for testing is?” when told Republican senators want to increase funds.

More money for reopening schools: After meeting with Alexander, Blunt and Shelby, Mnuchin told NBC News “Schools was a very big component” of their discussion but that he was “not going to talk about specifics, but it is a lot of money,” Asked how much funding will be included in the bill, Mnuchin said upwards of $70 billion “would be a good guess.”

Alexander and Blunt said they believe funding for testing is directly correlated to reopening schools.

Trump threatened earlier to withhold funds for schools if they didn’t reopen. Asked if funding for schools should be conditioned on reopening, Alexander did not answer. Blunt told reporters he doesn’t want to penalize schools that choose not to reopen, but thinks that schools that do open back up will need more funding.

Meadows told reporters “We’ll be briefing you all tomorrow” when asked if money will be conditioned on schools reopening.

“Obviously it will be a negotiation between the Republicans, Democrats and the White House,” Thune said. “ I can’t imagine a scenario where extending it at the current level would happen.”

Stimulus checks: Republicans are torn over more direct payments, but the administration wants it.

“Nothing is final. But I suspect that there will, there’s a high level of interest in doing something more to help people, particularly on the lower end of the income scale,” Thune said. “But I think the last version of this cost somewhere on the order of $300 billion, and there’ll be a plug in there to help people and whether that’s payroll tax, or, you know, the direct checks, checks, or what form that takes, I’m not sure.”

“I think once a person has a check in his hand, x number of dollars will be $1,200 or $1,000, I don’t know. But I think that’s going to do more economic good than if we dribble out $30 every paycheck,” he said. “Because people are going to notice and take some action as a result. So I hope all of this is being done in regard to the economic necessity.”

Liability protections: Legal protections for schools, colleges, charities, businesses and frontline health care workers and employers who follow public health guidelines will all but certainly be included in the Republican plan.

“We don’t need an epidemic of lawsuits on the heels of a pandemic,” McConnell said Monday.morning.