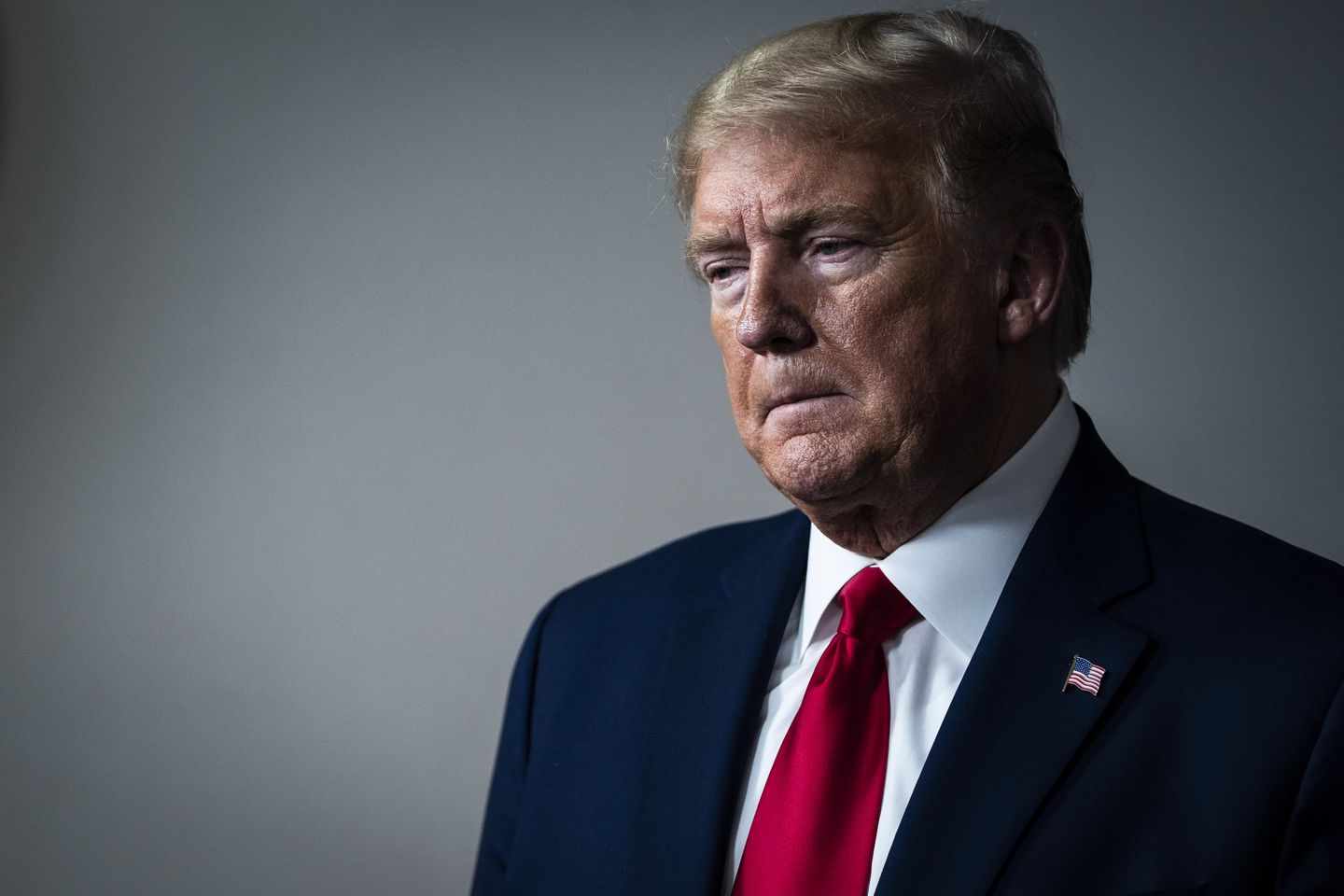 “I will be issuing a temporary suspension of immigration into the United States,” Trump said during a White House briefing Tuesday. “By pausing, we’ll help put unemployed Americans first in line for jobs. It would be wrong to be replacing them with new immigrant labor flown in from abroad.”

Senior White House officials and attorneys met Tuesday to sort out the logistics and legal implications of President Trump’s late-night Twitter proclamation that he would freeze immigration to the United States, a move that came with little indication of who the U.S. government would bar from entry amid the coronavirus outbreak.

Trump decreed late Monday that he wanted to protect the country from the threat of foreigners bringing the virus to U.S. shores and to stem the economic crash the pandemic has triggered — and he retweeted the same post Tuesday, in one measure of his enthusiasm for the plan. Yet senior officials at the Department of Homeland Security and other federal agencies could not respond to basic questions about the scope of the order.

Other aides said privately that the president had once more announced a sweeping policy that was not yet ready for implementation, and his administration was trying to piece together an executive order for him to sign that would catch up to his whim.

Trump announced the immigration suspension at Tuesday evening’s coronavirus briefing, and the order is expected to exempt some categories of nonimmigrant visas, including temporary workers, according to officials with knowledge of the draft.

The president has broad authority to restrict entry into the United States — a point the U.S. Supreme Court affirmed in upholding his controversial travel ban in 2018 — and that power is perhaps no greater than during a public health emergency. State Department officials said they are still waiting for guidance from the White House regarding what types of immigrant visas will be suspended.

Immigrant visas are issued for those who intend to move permanently to the United States. The majority are family members of U.S. citizens or permanent residents.

The suspension of immigrant visas would not affect agricultural workers who come to the United States for the harvest season, or doctors who plan to do their residencies in U.S. hospitals before returning home. Both arrive on nonimmigrant visas.

The United States already has suspended routine visa services overseas, so very few applicants are likely to be stopped just before they board a plane.

Though the policy move has been presented as a way to protect the United States from foreign instances of the coronavirus, the outbreak is well-established across the country and has been for more than a month. The United States currently has more confirmed coronavirus cases, by far, than any other country, with nearly 800,000 as of Tuesday afternoon. The next highest country is Spain, with 204,000 cases. The United States also has far more confirmed virus-related deaths — nearly 45,000 — than any other nation and about the same number as the next two countries — Spain and Italy — combined.

Immigrants from countries such as England, Ireland, Mexico, South Korea and Canada deluged their lawyers with panicked emails Tuesday, worrying that Trump’s tweet will upend their jobs, college studies or efforts to bring their loved ones to the United States. Some have paid tens of thousands of dollars in legal fees to secure their legal papers, and waited years for their approvals.

Juan Ramirez, a 41-year-old restaurant cook in Virginia, said he was planning to visit the U.S. Consulate in his native Mexico soon for a final interview and background checks required to secure his green card. His wife, a U.S. citizen, is sponsoring him. But now the consulates are shuttered and he is afraid that if he leaves the country, the U.S. government will not let him back in.

He has a college degree in information technology from Mexico and dreamed of building a career, buying a house and starting a family this year.

“We’re trying to get our country back and working again, basically rebooting the American economy,” he said. “Potentially shutting all that down is economic suicide.”

William Kerr, a Harvard Business School professor whose research focuses on how high-skilled immigrant labor has reshaped the U.S. economy, said closing off the pipeline for foreign talent could create barriers to economic success.

Immigrants represent more than a quarter of U.S. entrepreneurs and a quarter of inventors, Kerr said. “These are contributions that are very valuable to economic growth,” he said. “We are going to need to restore large parts of our economy and immigrants could be very helpful in that role.”

Kerr said the argument that unemployed Americans should get first dibs at job vacancies over foreign workers might sound good in principle, but in reality, the people looking for work might not match the job in terms of location or required skills.

“To think that shutting down all immigration into the country is the right strategy is quite foolish,” Kerr said. “It is not one that is economically sound and certainty is not motivated by containing the crisis itself. It’s more of an effort to cast suspicion and blame toward immigrant groups.”

Polls show the president is facing a difficult reelection contest and a growing number of Americans disapprove of his handling of the pandemic crisis. Trump has defended his record by pointing to restrictions he ordered on travelers from China, and he has a well-known penchant for ordering closures, shutdowns and bans on international forces he regards as threats, though nothing as extreme as a total freeze on the U.S. immigration system.

There is no precedent for such a move by a U.S. leader, said Andrew Selee, president of the nonpartisan Migration Policy Institute in Washington.

“I can’t think of any parallels to this in any other democratic country in the modern era,” he said. “We’re essentially telling citizens, companies, innovators, educational institutions to put their plans on hold. Can a president do that? I guess they’re finding whether they have legal authority.”

Trump made his announcement in a tweet at 10: 06 p.m. Monday, saying the move to suspend immigration would shore up American jobs and shield the country from the pandemic, calling coronavirus “the Invisible Enemy.”

“In light of the attack from the Invisible Enemy, as well as the need to protect the jobs of our GREAT American Citizens, I will be signing an Executive Order to temporarily suspend immigration into the United States!,” Trump wrote.

For Trump’s executive order to have the kind of sweeping impact he appears to seek, it would have to direct the State Department and U.S. Citizenship and Immigration Services to immediately stop issuing immigration visas and green cards. That would potentially leave the fiancees, children and other close relatives of U.S. citizens and residents unable to reach the United States or legally remain here, and it’s unclear whether some of those categories could be exempted from the order.

Selee, of the Migration Policy Institute, said governments have good reasons for reducing migration levels during times of economic crisis and high unemployment, or easing restrictions during boom times to extend periods of growth.

“Governments typically try to find nuanced solutions to limit or expand immigration,” he said. “What you don’t see is governments doing blanket stops.”

Much of the U.S. immigration system is driven by domestic demand, experts note: U.S. citizens and residents marry foreign spouses, or they seek to bring parents, children and other relatives into the country. Companies hire employees to staff hard-to-fill and high-skilled jobs. Universities bring students, professors and athletes.

All of those migration categories would be affected by the type of sweeping order the president has teased.

On Tuesday, the president’s reelection campaign sent out a snap poll to supporters asking whether they approved of his executive order, even suggesting Trump would be influenced by their degree of support as the policy was being crafted. “Your input is crucial to the President’s next steps,” the message read.

Trump has remained focused on immigration, the Mexico border and his push to build a border wall there, inserting updates on construction progress in the middle of the daily coronavirus Task Force briefings, unprompted.

On Monday, as the head of the U.S. Army Corps of Engineers Lt. Gen. Todd Semonite finished briefing reporters on efforts to build temporary hospital facilities, Trump urged the military commander to tell reporters about his border wall project. When the general finished, reporters resumed asking questions about the pandemic.

The Trump administration is preparing to debut a “border wall cam” in coming days that will stream images of construction crews building the structure, according to two administration officials involved in the project, an initiative of Jared Kushner’s.

The camera footage will display on the web site of U.S. Customs and Border Protection, the officials said, and could include footage from multiple locations. One official involved in the planning said the feed will have a time delay to avoid tipping off smuggling organizations to the whereabouts of U.S. Border Patrol agents, or their absence.