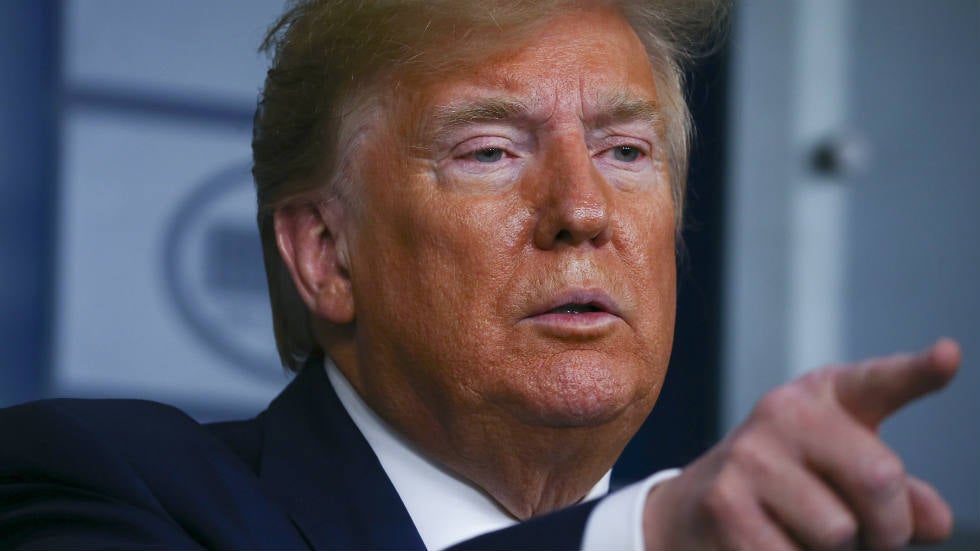 Trump for three straight days has backed demonstrators protesting state restrictions, ratcheting up already high tensions with state governors and cutting against the White House’s own recommendations for a gradual reopening of business.

Trump’s tweets and words of support for protesters have contradicted the administration’s own health experts and Vice President Pence, who has urged Americans to heed the advice of local officials.

They’ve also drawn criticism from some Republicans, underscoring the tensions.

“We’re sending completely conflicting messages out to the governors and to the people, as if we should ignore federal policy and federal recommendations,” Maryland Gov. Larry Hogan (R) said Sunday on CNN’s “State of the Union.”

He characterized Trump’s statements as unhelpful.

Anthony FauciTesting debate heats up: What you need to know about the coronavirus fight today The Hill’s Coronavirus Report: Wenstrup rips China and WHO; Congress seeks to pass new aid bill this week Trump support for protests threatens to undermine social distancing rules MORE, the top infectious diseases expert on the coronavirus task force, said Monday that the demonstrations and protests could lead to a new rise in coronavirus infections, making it more difficult to reopen the economy.

“Clearly this is something that is hurting from the standpoint of economics and the standpoint of things that have nothing to do with the virus,” Fauci told ABC. “But unless we get the virus under control, the real recovery, economically, is not going to happen.”

Trump has repeatedly used state leaders as a new target, shifting blame for shortages of testing supplies and personal protective equipment to governors and other local officials. He expressed backing for protesters in Michigan, Minnesota and Virginia, all of which are battleground states in the 2020 presidential contest, in a series of tweets Friday morning.

The president also has said that restrictions in some states have gone too far, and suggested protesters in Virginia were justified in demonstrating because of recent gun control measures signed into law by the state’s Democratic governor.

“Some governors have gone too far. Some of the things that happened are maybe not so appropriate,” Trump told reporters Sunday, initially refusing to name specific states before highlighting Virginia and Michigan. “I think, in the end, it’s not going to matter because we’re starting to open up our states. And I think they’re going to open up very well.”

Hogan noted Sunday that none of the states cited by Trump have seen a decline in overall cases for a 14-day period, one of the criteria proposed by the White House for states to move to the first phase of reopening.

The coronavirus has infected nearly 762,000 people in the U.S., according to data from Johns Hopkins, and killed more than 40,000.

It has also shattered the economy, putting millions of Americans out of work as businesses are shuttered as part of strict social distancing measures.

The protests calling for an end to the lockdowns began in earnest last week with more expected in the days to come. Attendees have carried posters accusing governors of overreach and bemoaning infringements on civil rights.

“There is a lot of Tea Party DNA in these protests. That Tea Party DNA is also what Trump rode to the White House,” said Adam Brandon, president of the conservative group FreedomWorks. “If you look at that, it makes sense that he’s talking to his base. If there’s one thing Donald Trump is uniquely skilled at, it’s communicating to his base of supporters.”

The gatherings have been dotted with Trump hats and Gadsden flags as protesters pack closely together, with few visibly wearing masks. The federal government’s guidelines call for individuals to maximize distance from others while in public and to limit their gatherings to 10 people or less, even in the first phase of reopening.

Trump has described the protesters as “responsible” and said Sunday he observed a group that appeared to be standing 6 feet apart in accordance with social distancing measures.

“We have tens of millions of Americans right now staring at May bills,” Conway said on Fox News. “They’re saying, I want to get back to work. The governors have the last word on that. Many of them are working on that, but some have been more concerned about, I think, controlling the populations than protecting them and the president is just making that clear.”

The size of the protests varied from state to state, raising questions about whether pushback to the coronavirus restrictions is a widespread sentiment. Thousands of people turned out in Lansing for last week’s protests in Michigan, but most gatherings have numbered in the hundreds. A planned demonstration in Maryland on Monday morning only garnered a few attendees, according to a spokesman for the governor.

An NBC News-Wall Street Journal poll released Sunday found 58 percent of registered voters worry the U.S. will move too hastily to lift restrictions meant to slow the spread of the virus, compared with 32 percent who fear the country will take too long and further damage the economy.

Trump’s support for the protesters is the latest chapter in what has been a whiplash-inducing relationship with governors amid the pandemic.

The president reportedly told governors on Thursday they will “call your own shots” in deciding when to lift restrictions, but on Sunday admonished those who have gone “too far” in imposing restraints.

Andrew CuomoNew York nurses union sues state, hospitals over coronavirus working conditions Overnight Health Care: Pressure builds on White House on testing | Georgia to reopen some businesses | Trump to meet with Cuomo Tuesday States should say ‘no thanks’ to a federal bailout MORE (D) on Friday for critical comments during a press conference, only to play a favorable soundbite from Cuomo during a White House briefing two days later. After tweeting on Friday that Minnesota needed to be liberated, Trump said Monday he was working “closely” with the state’s governor.