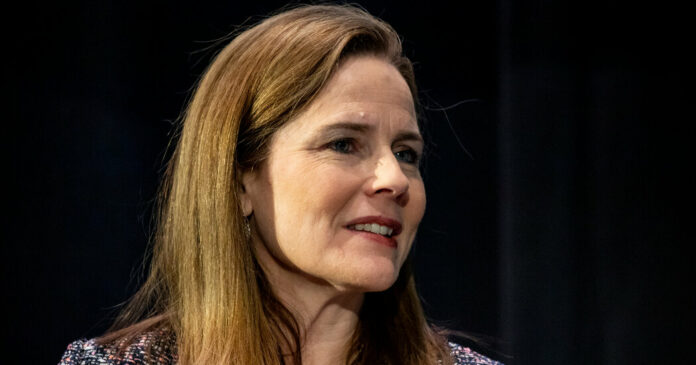 WASHINGTON — President Trump has selected Judge Amy Coney Barrett, the favorite candidate of conservatives, to succeed Justice Ruth Bader Ginsburg and will try to force Senate confirmation before Election Day in a move that would significantly alter the ideological makeup of the Supreme Court for years.

Mr. Trump plans to announce on Saturday that she is his choice, according to six people close to the process who asked not to be identified disclosing the decision in advance.

As they often do, aides cautioned that Mr. Trump sometimes upends his own plans. But he is not known to have interviewed any other candidates and came away from two days of meetings with Judge Barrett this week impressed with a jurist he was told would be a female Antonin Scalia, referring to the justice she once clerked for.

“I haven’t said it was her, but she is outstanding,” Mr. Trump told reporters who asked about Judge Barrett’s imminent nomination at Joint Base Andrews outside Washington after returning Friday evening from a trip to Florida and Georgia.

The president’s political advisers hope the selection will energize his conservative political base in the thick of an election campaign in which he has for months been trailing former Vice President Joseph R. Biden Jr., his Democratic challenger. But it could also rouse liberal voters afraid that her confirmation could spell the end of Roe v. Wade, the decision legalizing abortion, as well as other rulings popular with the political left and center.

The nomination will kick off an extraordinary scramble by Senate Republicans to confirm her for the court in the 38 days before the election on Nov. 3, a scenario unlike any in American history. While other justices have been approved in presidential election years, none has been voted on after July. Four years ago, Senate Republicans refused to even consider President Barack Obama’s nomination to replace Justice Scalia with Judge Merrick B. Garland, announced 237 days before Election Day, on the grounds that it should be left to whoever was chosen as the next president.

In picking Judge Barrett, a conservative and a hero to the anti-abortion movement, Mr. Trump could hardly have found a more polar opposite to Justice Ginsburg, a pioneering champion of women’s rights and leader of the liberal wing of the court. The appointment would shift the center of gravity on the bench considerably to the right, giving conservatives six of the nine seats and potentially insulating them even against defections by Chief Justice John G. Roberts Jr., who on a handful of occasions has sided with liberal justices.

Mr. Trump made clear this week that he wanted to rush his nominee through the Senate by Election Day to ensure that he would have a decisive fifth justice on his side in case any disputes from the vote reached the high court, as he expected to happen. The president has repeatedly made baseless claims that the Democrats are trying to steal the election and appears poised to challenge any result of the balloting that does not declare him the winner.

Senator Mitch McConnell, Republican of Kentucky and the majority leader, has enough votes to push through Judge Barrett’s nomination if he can make the tight time frame work. Republicans are looking at holding hearings before the Senate Judiciary Committee the week of Oct. 16 and a floor vote by late October.

Democrats have expressed outrage at the rush and accused Republicans of rank hypocrisy given their treatment of Judge Garland, but they have few options for slowing the nomination, much less stopping it. Instead, they have focused on making Republicans pay at the ballot box and debated ways to counteract Mr. Trump’s influence on the court if they win the election.

Mr. Trump met with Judge Barrett at the White House on Monday and Tuesday and was said to like her personally. While he said he had a list of five finalists, he never interviewed anyone else for the job and passed over Judge Barbara Lagoa of the United States Court of Appeals for the 11th Circuit, who appealed to campaign advisers in particular because of her Cuban-American heritage and roots in Florida, a critical battleground state in the presidential contest.

Despite Mr. Trump’s penchant for drama and the intrigue that surrounded his first two picks for seats on the Supreme Court, the selection process since Justice Ginsburg died last Friday has been fairly low-key and surprisingly predictable. The president has long signaled that he expected to put Judge Barrett on the court and has been quoted telling confidants in 2018 that he was “saving her for Ginsburg.”

If confirmed, Judge Barrett would become the 115th justice in the nation’s history and the fifth woman ever to serve on the Supreme Court. At 48, she would be the youngest member of the current court as well its sixth Catholic. And she would become Mr. Trump’s third appointee on the court, more than any other president has installed in a first term since Richard M. Nixon had four, joining Justices Neil M. Gorsuch and Brett M. Kavanaugh.

Judge Barrett graduated from Notre Dame Law School and later joined the faculty. She clerked for Justice Scalia and shares his constitutional views. She is described as a textualist who interprets the law based on its plain words rather than seeking to understand the legislative purpose and an originalist who applies the Constitution as it was understood by those who drafted and ratified it.

She has been a judge for only three years, appointed by Mr. Trump to the United States Court of Appeals for the Seventh Circuit in 2017. Her confirmation hearing produced fireworks when Democratic senators questioned her public statements and Catholicism. That made her an instant celebrity among religious conservatives, who saw her as a victim of bias on the basis of her faith.

Judge Barrett and her husband, Jesse Barrett, a former federal prosecutor, are reported to be members of a small and relatively obscure Christian group called the People of Praise. The group grew out of the Catholic charismatic renewal movement that began in the late 1960s and adopted Pentecostal practices like speaking in tongues, belief in prophecy and divine healing. The couple have seven children, all under 20, including two adopted from Haiti and a young son with Down syndrome.

In a 2006 speech to Notre Dame graduates, she spoke of the law as a higher calling. “If you can keep in mind that your fundamental purpose in life is not to be a lawyer, but to know, love and serve God, you truly will be a different kind of lawyer,” she said.

But during her 2017 confirmation hearing, she affirmed that she would keep her personal views separate from her duties as a judge. “If you’re asking whether I take my faith seriously and I’m a faithful Catholic, I am,” she told senators. “Although I would stress that my personal church affiliation or my religious belief would not bear in the discharge of my duties as a judge.” She was confirmed on a 55-to-43 vote, largely along party lines.

As a law professor, Judge Barrett was a member of Faculty for Life, an anti-abortion group, and wrote skeptically about precedent in Supreme Court rulings, which both sides in the abortion debate took to mean she would be open to revisiting Roe v. Wade.

“I tend to agree with those who say that a justice’s duty is to the Constitution and that it is thus more legitimate for her to enforce her best understanding of the Constitution rather than a precedent she thinks clearly in conflict with it,” she wrote in a Texas Law Review article in 2013.

She later criticized Chief Justice Roberts for his opinion preserving Mr. Obama’s Affordable Care Act, saying he went beyond the plausible meaning of the law. As an appellate judge, she joined an opinion arguing on behalf of an Indiana law banning abortions sought solely because of the sex or disability of a fetus, disagreeing with fellow judges who struck it down as unconstitutional.

Conservative and liberal interest groups did not wait for Mr. Trump’s announcement to open the battle over Judge Barrett’s confirmation. Each side prepared multimillion-dollar campaigns to introduce her to the public and frame the debate to come in the Senate, with an eye on the November contest.

Several polls over the past week have shown that most Americans, including many Republicans, believe the next justice should be selected by the winner of the November election, not by Mr. Trump in the meantime.

A survey released Friday by The Washington Post and ABC News suggested the fight may drive Democrats even more than Republicans to the polls. About 64 percent of Mr. Biden’s supporters told pollsters that the vacancy made it “more important” that the Democrat win the election, while just 37 percent of Mr. Trump’s supporters said the same for him.