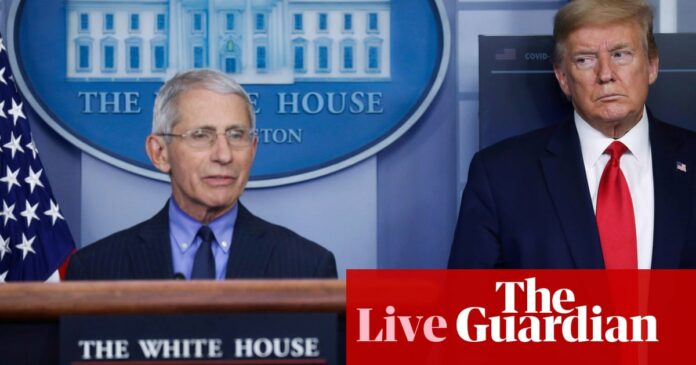 Senate minority leader Chuck Schumer has told CNN that cutting funding for the Centers for Disease Control during the pandemic would be extremely foolish.

Schumer added that the Democrats would fight to keep funding for the CDC. “We are going to do everything we can to make sure that the CDC is fully funded in the stimulus package,” he said.

Schumer also said it was important to keep data about the pandemic public. “For the president, the administration to want to sweep the facts under the rug so they can hide them, it’s not gonna work,” he said. “Whenever the President has tried to avoid the problem, like this will go away, this wont affect many people, it’s gotten worse.”

Some have sought to downplay the alarming rise in Covid-19 cases across the US by saying that it is mostly younger, healthier people who are contracting the virus. Apart from the fact that young people can spread the virus to more vulnerable populations, there are also plenty of examples of healthy people suffering devastating effect from Covid-19.

And they don’t get much healthier than professional athletes. Atlanta Braves first baseman Freddie Freeman, one of the best players in baseball, said he prayed for his life after contracting the virus.

“I said a little prayer that night,” Freeman said, describing how his temperature rose to 104.5F (40.2C) at one point. “I’ve never been that hot before. My body was really, really hot. … I said ‘Please don’t take me’ because I wasn’t ready.”

The 30-year-old Freeman has since recovered but says he does not know if he will be ready for the start of the MLB season, which is due to get underway on Thursday.

Colorado’s Democratic governor, Jared Polis, has called national testing for Covid-19 “a disgrace” during an appearance on NBC’s Meet The Press.

“So, the national testing scene is a complete disgrace,” said Polis. “So, every test we send out to private lab partners nationally, Quest, Labcorp, seven days, eight days, nine days maybe six days if we’re lucky. Almost useless from an epidemiological or even diagnostic perspective. Fortunately, our state lab has done yeoman’s work. We’re running three shifts a day there, 24 hours a day.

“So while some are still sent out of state, and unfortunately that takes a long time and we can’t count on it and our country needs to get testing right, we’re trying to build that capacity in Colorado to process tests at that one to two-day turnaround, and we already are able to do two or three-thousand a day that way, and even more along with our private lab partners in-state like UC Health.”

The Florida Department of Health reported 12,478 new cases of Covid-19 on Sunday, a rise from the 10,328 cases reported on Saturday. In addition, 87 new deaths were reported, down from the 90 on Saturday. A total of 4,982 people have died from the virus in Florida since the start of the pandemic.

In an appearance on ABC’s This Week on Sunday, congresswoman Donna Shalala, who represents Florida’s 27th congressional district, attacked the state and federal response to the pandemic.

“It’s terrible,” she said. “We have community spread, which means the virus is out of control. The lack of leadership in the White House and in our governor’s office, they simply have not hit this with a hammer, which is what we needed to do, and starve the virus. They opened too soon. And they misunderstand what you need to do – or they understand it and they’re not willing to do it.

“Next week, the Kaiser Family Foundation will report for the hotspot states that it’s seniors again, in nursing homes, and young people now. In my district, it’s low-income minorities, Hispanics and African Americans, who were forced to go back to work for economic reasons and because their employers demanded they go back to work. And they live in multigenerational situations, in small quarters, and the disease simply spread in those areas.”

There has been some confusion as to whether Kanye West’s run for the presidency is serious. Earlier this week, he qualified to appear on the presidential ballot in Oklahoma while on Friday he asked his followers to plead with supporters to get him on the ballot in South Carolina, where he missed the deadline for registration. However, earlier in the week West’s adviser said he “is out” of the running.

On Sunday, a tweet appeared to show West still thinks the dream is alive. He posted a drawing of the White House with the caption “THE WEST WING”.

While many view West’s run as a stunt, others worry he could take votes off the presumptive Democratic candidate Joe Biden in crucial battleground states if he does run.

Ohio’s Republican governor, Mike DeWine, has appeared on NBC’s Meet The Press and said he is concerned about the direction Covid-19 is taking in his state.

“We are at the point where we could become Florida, you know. Where you look at our numbers today versus where Florida was a month ago, we have very similar numbers. So we’re very, very concerned,” said DeWine.

DeWine then avoids a question about whether he has confidence in Donald Trump’s leadership during the Covid-19 pandemic.

“I think people look frankly to the governors. Historically, we’ve looked to governors to deal with, you know, crises, whether it’s tornado damage, whether it’s a flood, a pandemic,” says DeWine. “We look to governors. And so, you know, what this administration has been able to provide us and that Congress has provided us, and we thank both of them, is the money.”

DeWine is asked again if he has confidence in the president’s leadership, and he again largely avoids the question, instead mostly praising Mike Pence rather than Trump.

The New York Times reports that Roger Stone, the longtime friend and former campaign adviser for Donald Trump, has used a racial slur during an interview with a broadcaster who is black.

O’Kelly referenced Stone’s relationship with the president when he asked: “There are thousands of people treated unfairly daily, how your number just happened to come up in the lottery, I am guessing it was more than just luck, Roger, right?”

It then sounded like Stone, who was being interviewed over the phone, spoke to someone nearby stating: “arguing with this Negro”. When challenged about his use of the word, Stone remained silent before denying he had used it.

“It’s the diet version of the N-word, but as an African-American man, it’s something I deal with pretty frequently,” O’Kelly told the Times. “If there’s a takeaway from the conversation, it is that Roger Stone gave an unvarnished look into what is in the heart of many Americans today.”

“We’re continuing to progress forward through the Covid-19 pandemic in the face of a continued explosion of cases throughout the United States, and that’s reflected in today’s hospitalizations – the lowest number since March 18 – and rate of positive cases,” New York governor Andrew Cuomo said in a statement.

Karen Bass, chair of the Congressional Black Caucus, is on ABC’s This Week to talk about civil rights leader and congressman John Lewis, who died on Friday.

“What we have to do is live up to his legacy,” says Bass. “We need to continue that fight for social justice. And again, the first thing we need to do is to pass the Voting Rights Act and get it signed, because we’re very concerned about the election coming up and voter suppression, and the fact that people are going to have to vote in dangerous conditions. They need to be able to vote from home.

“And I know that if he was still with us, he would be leading that fight.”

Dr Francis Collins, the director of the National Institutes of Health, has appeared on NBC’s Meet The Press.

He is asked whether he has been told to fire or demote Anthony Fauci by anyone in the White House. “Nobody has asked me to do that and I find that concept unimaginable,” he says. “And I am amused that everybody’s calling me Dr Fauci boss because his real boss is his wife, Christine Grady. She might have something to say about that.”

Collins also expresses confusion at the fact that mask wearing has turned into a political question.

“Well, it is bizarre that we have turned the mask wearing into something political,” he says. “Imagine you were an alien coming to the planet Earth, and looking around, looking at the scientific data or going from various place to place and looking to see who’s wearing masks.

“You would be totally astounded, puzzled, amazed, you’d wonder, ‘What is going on here? How could it be that something as basic as a public health action, that we have very strong evidence can help, seems to attach to people’s political party?’”

The interview ends with Trump being asked how he will remember his years in the White House. He strikes a familiar, self-pitying tone.

“I think I was very unfairly treated,” he says. “From before I even won I was investigation by a bunch of thieves, crooks. It was an illegal investigation.”

Trump refuses to say he will accept result of election

Trump says he will win the election in November against an opponent who is “mentally shot”.

Trump then continues his tactics of depicting Biden as a tool of the “radical left”.

“He will destroy this country, but it won’t be him, it will be the radical left – the same ideology that took over Venezuela… they now have no water or medicine … the same will happen here.”