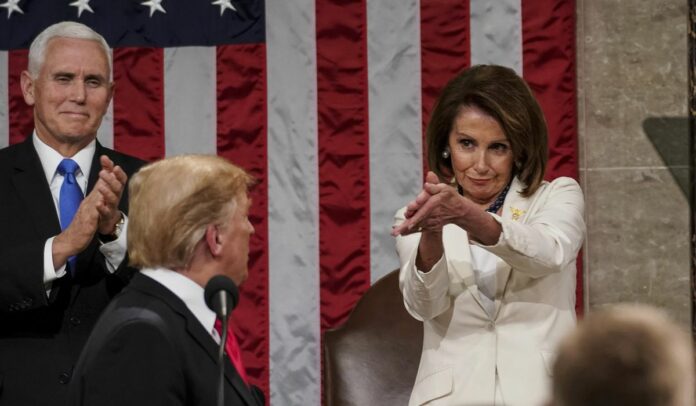 House Homeland Security Committee Chair Bennie G. Thompson refuses to call acting Homeland Security Secretary Chad Wolf by his title, instead addressing him with everything from “mister” to “honorable” — but not “secretary.”

The Justice Department delivered a startling rebuke to another House panel this week, saying Judiciary Chairman Jerrold Nadler’s handling of a hearing with Attorney General William P. Barr over the summer was so terrible that the department won’t send witnesses to future hearings until Mr. Nadler promises better behavior.

Further up the food chain, President Trump hasn’t spoken to House Speaker Nancy Pelosi in nearly a year, though they have exchanged insults, with her calling him “morbidly obese” in the spring, and him deeming her “a sick woman.”

Rarely have relations between a president and a speaker been this toxic.

“There have been other presidents and speakers who didn’t see eye-to-eye, yet they maintained a cordial relationship and talked from time-to-time. Trump and Pelosi have not talked in a year and their lack of a relationship has ruined legislative policymaking and oversight,” Mr. West said. “The two are so far apart that it is hard for them to address important issues such as COVID relief and a possible government shutdown.”

Indeed it’s even making it difficult for House lawmakers to hear directly from Cabinet officials — something that used to be routine.

Republicans say it’s because Democrats have turned committee hearings into “spectacles,” making them not worth the time to show up.

They also refused to give Mr. Barr a chance to respond, and indeed some made clear they didn’t want to hear what he had to say.

“All told, when the attorney general tried to address the committee’s questions, he was interrupted and silenced in excess of 70 times,” Mr. Boyd wrote. “One member interrupted him and admitted, ‘Well I don’t want you to tell your story.’”

Things got so bad that at one point Mr. Barr asked to take a five-minute break and Mr. Nadler refused that common courtesy. “You’re a real class act,” Mr. Barr chided him.

Mr. Boyd said in light of that experience, the department won’t be sending witnesses to two hearings on civil rights matters and federal prisoner operations.

Mr. Nadler’s office didn’t respond to a request for comment.

Mr. Trump’s intelligence chief recently announced he was cutting off election security briefings for members of Congress, saying he worried they were leaking classified information. He has since announced in-person briefings will still take place for the intelligence committees, but not for the broader membership.

Elsewhere on Capitol Hill, Mr. Thompson said he’s pondering next steps after Mr. Wolf bucked his subpoena to testify at an annual hearing on threats to the homeland, after promising months ago to attend.

“The committee is currently reviewing our options and we will certainly not hesitate holding Mr. Wolf in contempt for defying our lawful subpoena,” Mr. Thompson said.

Mr. Thompson placed an empty chair for Mr. Wolf at the witness table for his hearing, and said the absence “should appall every member of this committee.”

During the hearing he repeatedly called the department chief “Mr. Wolf,” though he called the witnesses who did show up by their titles. And in a letter to the acting secretary this week Mr. Thompson addressed him as “Honorable Chad Wolf.”

An aide to Mr. Thompson said it would be “improper” to call Mr. Wolf acting secretary because the Government Accountability Office has ruled Mr. Wolf is not legally in the top job. The Homeland Security inspector general has challenged that report.

Mr. Thompson on Tuesday fired off a letter to senators calling Mr. Wolf “unfit” to be confirmed.

The bad blood between the White House and the House flows from the top, where Mr. Trump and Mrs. Pelosi haven’t spoken since Oct. 16, 2019, when Democrats walked out of a meeting to discuss Mr. Trump’s decision to withdraw U.S. troops from Syria.

Senate Minority Leader Charles E. Schumer, who was part of the walkout, called Mr. Trump a “third-rate politician” and Mrs. Pelosi said he had a meltdown.

The president responded by tweeting out a photo of Mrs. Pelosi standing in the White House Cabinet Room, apparently lecturing the president’s team. He labeled the photo “Nervous Nancy’s unhinged meltdown!”

Since then Mrs. Pelosi has led the House in impeaching Mr. Trump, and is still battling to get a look at the president’s tax returns. She said over the summer that the House will pursue the returns even if Mr. Trump loses the election.

Amid those divisive moves, Mrs. Pelosi and Mr. Trump were still able to approve a new U.S.-Mexico-Canada Agreement on free trade. And since then they’ve managed to strike deals on trillions of dollars in federal assistance to deal with coronavirus.

But they are trillions of dollars apart on another round of pandemic relief and don’t see eye-to-eye on responses to racial justice protests.

Mrs. Pelosi earlier this month told MSNBC that while she and Mr. Trump haven’t spoken, she’s talking with his people, including Treasury Secretary Steven Mnuchin. White House Chief of Staff Mark Meadows is also a former member of Congress.

“Quite frankly, my experience with the president is it hasn’t been on the level,” she told the network. “You know, he’ll say something, then it doesn’t really happen. So, in the interest of time, we’ll work with who he sends over.”

Other presidents have also struggled to get along with congressional leaders.

The New York Times wrote that relations between the two were in a “deep freeze.”

Likewise Mr. Trump has clashed with Senate Minority Leader Charles E. Schumer, New York Democrat — though since Republicans control the Senate, the chilly relations between Mr. Trump and Mr. Schumer haven’t bled over into hearings and other operations.