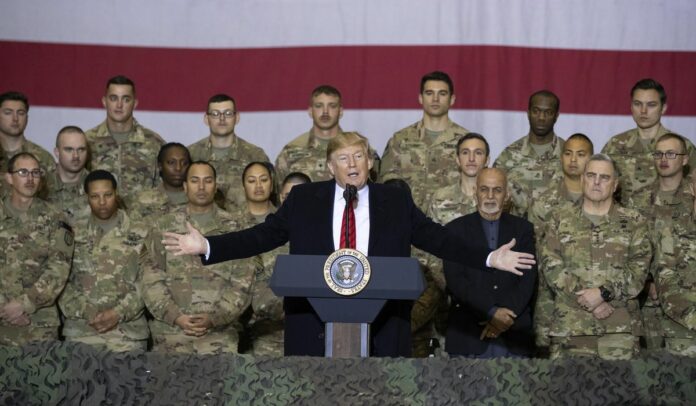 The Trump campaign is counting on an aggressive ground game to help win over active-duty troops and veterans during the home stretch of the White House race, but with little room for error, Republican insiders fear a series of missteps and miscalculations may swing the highly coveted and Republican-leaning demographic toward Democratic rival Joseph R. Biden.

The former vice president has scored surprisingly well in surveys of U.S. troops and picked up the endorsement Thursday of nearly 500 national security figures, including 22 four-star retired officers.

But top Trump campaign officials say they are confident that men and women in uniform remain assets for the president. They dismiss recent polls that show service members moving away from Mr. Trump and toward Mr. Biden.

The campaign officials say the deciding factor will be the president’s track record: drawing down forces in Afghanistan and Iraq, securing pay raises for troops, instituting reforms at the Department of Veterans Affairs and other steps.

Capturing those votes could prove vital in swing states such as Ohio, North Carolina, Pennsylvania and Florida, home to some of the country’s largest active-duty and veteran populations.

But there are reasons to question the Trump campaign’s confidence. Even a modest dip in support for Mr. Trump could make all the difference in a tight race, and some political observers say the president made a mistake early in his administration that gave Democrats a golden opportunity to gain ground.

“A lot of folks don’t realize that the military mindset is rapidly moving to the political left, just like the Justice Department, State Department and other big government entities did a long time ago,” said J.D. Gordon, a former Trump campaign national security adviser and Pentagon spokesman. “I think the campaign is doing what it can, but it’s like pushing back against a rising tide or fighting gravity — only so much you can do.

“Making matters worse, it didn’t help that while the president energized ‘America First’ types during the 2016 campaign, he ended up staffing the Pentagon as if Hillary [Clinton] or Jeb [Bush] had won, stiffing the campaign and his ideological supporters in the process,” Mr. Gordon told The Washington Times. “The White House is trying to fix this now, but it’s a little late in the game. The damage is already done.”

Indeed, some of the president’s hand-picked top national security officials, most notably former Defense Secretary James Mattis and former National Security Adviser John R. Bolton, have become his most outspoken critics. Their turnabouts could offer some ideological cover for military voters who supported Mr. Trump in 2016 but now feel differently.

Mr. Gordon and other analysts say the White House missed a chance to install officials who deeply believed in the president’s foreign policy agenda. Instead, daylight between Mr. Trump and Pentagon leaders may have trickled down the ranks.

Mr. Trump also has publicly clashed with military leaders on Middle East strategy, the handling of individual military justice cases and other issues. This summer, Defense Secretary Mark Esper broke with the president over plans to deploy active-duty troops to quell riots and unrest in major American cities.

Mr. Trump at times has leaned into tension with the Pentagon and appealed directly to the rank and file after going over the heads of officers he once called “my generals.”

“I’m not saying the military’s in love with me,” Mr. Trump said at a news conference this month. “The soldiers are. The top people in the Pentagon probably aren’t because they want to do nothing but fight wars so that all of those wonderful companies that make the bombs and make the planes and make everything else stay happy.”

A recent story in The Atlantic that claimed the president referred to fallen troops as “losers” and “suckers” has only deepened concerns that Mr. Trump may be alienating the military and could lose his once-considerable edge among service members.

The president has vehemently denied making those comments. A host of current and former officials who were with Mr. Trump in 2018 when he allegedly made the comments also have challenged the article.

Even before the story was published, a Military Times poll released late last month showed troubling signs for the president. In the survey, 41% of active-duty troops said they would vote for Mr. Biden, compared with just 37% for Mr. Trump.

The data showed a remarkable fall for the president. At the start of his tenure in January 2017, 46% of service members had a positive view of Mr. Trump. In the most recent survey, that number was just 38%.

Trump supporters dismiss that poll, and the campaign says other data tells a much different story. A recent Fox News survey showed 56% of military veterans support the president, compared with 40% for Mr. Biden. The Fox poll was conducted in early September, several days after the release of the article in The Atlantic.

Because that survey included veterans and the Military Times poll focused just on active-duty troops, campaign officials say, it offers more proof of solid support in military circles. They also point out that Mr. Trump captured the support of more than 60% of military veterans in his 2016 contest with Mrs. Clinton, according to most exit polling.

This time, they expect the president to fare even better, in large part because of considerable progress on his pledge to wind down “endless wars” in the Middle East and bring thousands of troops back home.

“Whether it be rebuilding the American military, brokering peace in the Middle East or bringing home our troops, the facts are undeniable: President Trump is the biggest advocate for our men and women in uniform and will always fight to defend them,” Ken Farnaso, deputy national press secretary for the Trump campaign, told The Times. He called the campaign’s Veterans for Trump “one of our strongest coalitions to date.”

Veterans for Trump and other military-related campaign outreach efforts have held events recently in Wisconsin, Pennsylvania and other key battleground states, and many more are planned during the home stretch of the race, officials said. The campaign also points to a recent Trump endorsement by 235 retired military officials.

“After years of neglect from the Obama-Biden administration, our service members and veterans have finally found a strong advocate in President Trump,” the campaign said in a statement announcing the endorsements.

The president also is expected to make his military and foreign policy record a centerpiece of his pitch during debates with Mr. Biden, particularly how he reduced the U.S. military presence in Syria, Iraq and Afghanistan during his first term without starting any foreign conflicts.

Critics say Mr. Trump has dispatched thousands of additional troops to bases in Kuwait, Bahrain and elsewhere in the Middle East because of tensions with Iran. The Pentagon no longer releases exact counts, but deployments and redeployments to the region over the past two years seem to greatly outnumber the troops Mr. Trump has brought home.

Mr. Trump’s opponents intend to spend huge sums of money in the next month to appeal to veterans and to use military issues to sway crucial undecided voters.

In addition to left-leaning PACs such as VoteVets that are staunchly anti-Trump, groups such as The Lincoln Project, made up of current and former Republicans, are leaning hard into foreign policy, national security and the president’s relationship with the armed forces.

The Lincoln Project reportedly is launching a major ad buy in publications such as the Military Times and Stars and Stripes, both of which have huge readerships among service members, their families and veterans.

“It’s a complete disgrace that a commander in chief who dodged serving in Vietnam and denigrated POWs publicly has the audacity to disrespect the millions of brave men and women who volunteered for military service,” Fred Wellman, the Lincoln Project’s senior adviser for veterans affairs, told Politico this week.