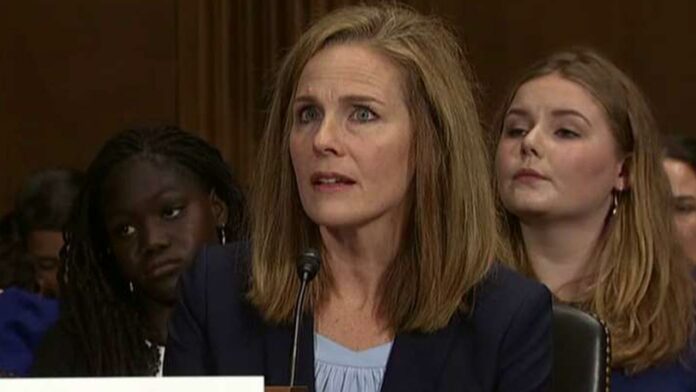 President Trump is expected to announce his pick to fill the Supreme Court seat vacated by the death of Justice Ruth Bader Ginsburg this afternoon, and sources tell Fox News they expect Amy Coney Barrett will be his nominee.

A source told Fox News that Trump had taken note of how “tough” Barrett was when she faced a tough confirmation fight in 2017, and kept her very much at the front of his mind since then.

The source said Trump met her during the considerations on who to replace Kennedy, talked to a lot of people about her, and wanted to keep her in place through the Kavanaugh vetting process in case there was an issue.

The source said that after Ginsburg died, Barrett was the only candidate he met and spoke with at length, although he made a few calls to 1th Circuit Judge Barbara Lagoa because some people were pushing him very hard to do so. But ultimately Barrett was always at the front of Trump’s mind to fill a Ginsburg vacancy.

It comes as Republicans in the Senate have vowed that they will vote on Trump’s Supreme Court nominee before the presidential election while Democrats have sworn that they will fight against her confirmation tooth and nail. Republicans are eyeing Oct. 12 as the target date for the start of confirmation hearings, a source familiar with the process told Fox News.

Trump has said he will announce his pick to fill the seat at 5 p.m. Saturday as members of the Senate and outside judicial activists on both sides have spent the week spinning up their massive political machines in anticipation of what is likely to be one of the nastiest political fights in recent American political history. The ad campaigns and Senate procedural shenanigans have already started.

“The stakes of this election, the stakes of this vacancy, concern no less than the future of fundamental rights for the American people,” Senate Minority Leader Chuck Schumer. D-N.Y., said on the Senate floor this week. “All the rights enshrined in our Constitution that are supposed to be protected by the Supreme Court of the United States. All the rights that could be undone or unwound by a conservative majority on the court.”

Senate Majority Leader Mitch McConnell, R-Ky., and Minority Leader Chuck Schumer, D-N.Y., have been engaged in a war of words this week in advance of the announcement of President Trump’s Supreme Court nominee. (AP)

He continued: “If you care about these things and the kind of country we live in, this election and this vacancy mean everything. … By every modicum of decency and honor, Leader McConnell and the Republican majority have no right to fill it.”

“Already some of the same individuals who tried every conceivable dirty trick to obstruct Justice Gorsuch and Justice Kavanaugh are lining up … to proclaim the third time will be the charm,” McConnell said. “The American people are about to witness an astonishing parade of misrepresentations about the past, misstatements about the present and more threats against our institutions from the same people, the same people who already have been saying for months … they want to pack the court.”

Barrett, 48, of the 7th Circuit Court of Appeals, was long reported to be the frontrunner in the discussions over who could fill in for Ginsburg. She is well known among the conservative legal establishment and Republican senators are familiar with her, The Washington Post reported.

Not needing to spend as much time educating senators about the nominee could potentially help Republicans in their effort to confirm the nominee in the less than 40 days until the presidential election — a breakneck pace compared to most modern Supreme Court appointments.

Other top reported contenders have been believed to be 11th Circuit Judge Barbara Lagoa; 4th Circuit Judge Allison Jones Rushing and 6th Circuit Judge Joan Larsen. Trump has repeatedly said that he was considering five potential nominees, although it is unclear who the fifth person may be.

WHERE HAS AMY CONEY BARRETT STOOD ON IMPORTANT CASES?

A Trump justice, if confirmed, would mark his third successful high court confirmation. That would be more than two-term Presidents Barack Obama, Bill Clinton and George W. Bush, who each successfully nominated two Supreme Court justices.

But Democrats say they will do everything possible to ensure that does not happen.

At the heart of the confirmation debate are the accusations of hypocrisy each side is lobbing at the other.

Republicans in 2016, after the death of Justice Antonin Scalia, refused to process Obama nominee Merrick Garland, who is a judge on the U.S. Circuit Court of Appeals for the District of Columbia. They said that the American people, through the presidential election that was still months away at that point, should have a say in who could choose the next Supreme Court justice. Democrats, meanwhile, argued for the Senate do its job and engage in its “advise and consent” function.

Now the roles are reversed, with Democrats arguing the country is too close to an election for the Senate to consider a Supreme Court nominee and Republicans saying precedent is on their side.

“At a press conference yesterday, here’s how the Republican Leader described the Senate’s role in confirming Supreme Court Justices,” Schumer said on the Senate floor this week. “He actually said: ‘We have an obligation under the Constitution [to consider a Supreme Court Justice] … should we choose to take advantage of it.'”

“Did you catch that…? It’s an obligation, but only if the Republican Leader chooses to take advantage of it,” he added.

Schumer then made a parliamentary inquiry to the chair at the time, Sen. Kelly Loeffler, R-Ga., who is in a tight race in Georgia, about whether there had ever been a Supreme Court justice confirmed between July and Election Day of a presidential election year.

Loeffler replied that there had not.

“As you just heard, not from the Democratic Leader, but from the records in the Senate as spoken by the chair, there is no precedent for confirming a Supreme Court Justice between July and Election Day,” Schumer said.

Loeffler on Saturday pushed back against Schumer’s argument, filing a letter to the Senate president noting that there were three Supreme Court confirmations that had happened in July — in 1888, 1892 and 1916, respectively. Her letter doesn’t assert that any confirmations have happened after July.

The Senate last considered a Supreme Court nominee during a presidential election year in 1940 when it voted to confirm Justice Frank Murphy in January that year. It also confirmed justices in Februrary 1932 and January 1916.

But McConnell is fond of pointing out that those confirmations happened when the presidency and the Senate were in the hands of the same party — as is the case now — while opposing parties controlling the Senate had not confirmed a Supreme Court nominee during an election year since the 1880s, well before Supreme Court conformations became contentious political battles. He says that in 2014 Americans elected a Republican Senate to oppose Obama and elected a Republican Senate in 2018 to back Trump.

McConnell said Schumer has done more than his part to make Surpeme Court nominations so contentious, calling him a “uniquely non-credible” source on judicial norms.

“As we await the hurricane of misrepresentations and bad-faith attacks that seem almost guaranteed to pour out, we need to understand, in clear terms, why our colleague from New York is a uniquely non-credible messenger when it comes to the Senate’s role in judicial confirmations,” McConnell said Tuesday. “[Modern judicial nomination] acrimony really got going in the early 2000s, when a group of Senate Democrats took the almost-never-used tactic of filibustering nominations and turned it into a constant routine for the first time ever.”

McConnell said it was Schumer who was “the driving force behind those tactics.” He said he was reading from 2003 New York newspaper clippings as he quoted the minority leader: “‘I am the leader (of the filibuster movement), and you know, I’m proud of it,’ said the senator from Brooklyn.’”

The votes at the moment appear to be on the Republicans’ side. Only two GOP senators, Lisa Murkowski of Alaska and Susan Collins of Maine, have indicated that they oppose moving forward with a confirmation before the election. And Murkowski recently softened her stance on the matter, indicating that even if she has objections to the process, she may vote on the eventual nominee based on her qualifications.

Republicans have 53 Senate seats, meaning they can afford three total defections and Vice President Mike Pence could break a tie to confirm the nominee. It appears unlikely that two senators beyond Collins and Murkowski would oppose a Republican nominee — but that picture will become clearer after Trump makes his pick on Saturday.

The Trump pick will begin going through intense media and Senate vetting. Then a hearing (or hearings, potentially). Then a Judiciary Committee vote, followed by a floor vote.

Nothing will be a done deal until that floor vote is over, according to James Wallner, the R Street Institute’s resident senior fellow for governance.

“This legislative process and the confirmation process … changes as people act and react to one another,” he told Fox News. “I think it all depends on if the Democrats are willing to use the different procedural tools they have at their disposal as leverage to try to somehow change the narrative.”