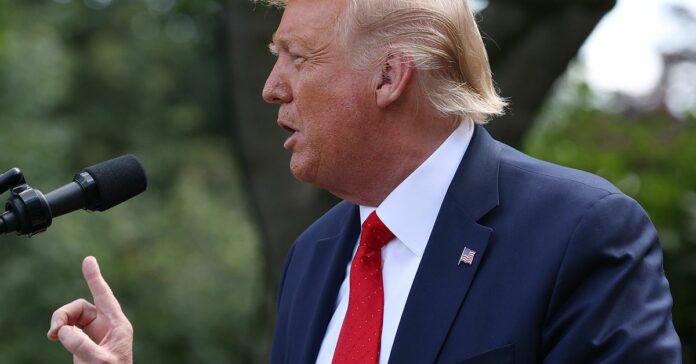 President Donald Trump issued a memorandum on Tuesday aiming to exclude unauthorized immigrants living in the US from census population counts for the purposes of redrawing congressional districts — a transparent bid to erode their political power and that of their communities.

States currently draw congressional districts, determining the areas that each elected official represents based on total population, including unauthorized immigrants. Current maps are due to be redrawn across the country in 2021 after the results of the 2020 census come in, and the stakes are high: Each redistricting has a lasting influence on who is likely to win elections, which communities will be represented in Congress, and, ultimately, what laws will will be passed.

Trump’s attempt to exclude unauthorized immigrants would reduce the counts in areas where foreign-born populations have traditionally settled — primarily Democrat-run cities — and therefore undermine their political power relative to more rural, Republican-run areas. But it could also impact red states with large immigrant populations, including Texas.

The White House has argued that by law, the president has the final say over who must be counted in the census. And Trump on Tuesday said that unauthorized immigrants should not be counted because it would undermine American representative democracy and create “perverse incentives” for those seeking to come to the US.

“There used to be a time when you could proudly declare, ‘I am a citizen of the United States,’” Trump said in a statement. “But now, the radical left is trying to erase the existence of this concept and conceal the number of illegal aliens in our country. This is all part of a broader left-wing effort to erode the rights of Americans citizens, and I will not stand for it.”

Beyond its impact on apportionment and redistricting, the memorandum could also indirectly discourage immigrants who have yet to respond to the census from doing so. That could hurt communities with large immigrant populations, as federal funding is usually determined by census counts.

The memorandum is likely to be swiftly challenged in court. Legal experts say that it clearly flouts the US Constitution, which requires that every person in the US — not just every citizen — be counted in the census. Trump cannot “pick and choose,” Dale Ho, director of the ACLU’s Voting Rights Project, said in a statement.

“His latest attempt to weaponize the census for an attack on immigrant communities will be found unconstitutional,” he said. “We’ll see him in court, and win, again.”

Trump has tried to politicize the census before

This isn’t the first time that Trump has used the census to target immigrants. In June 2019, Trump lost his bid to put a question about citizenship status on the 2020 census at the Supreme Court. Several states, including California and New York, said the question would depress response rates among immigrant communities and cost their governments critical federal funding.

Trump, on the other hand, had argued that citizenship data would aid the Department of Justice’s enforcement of the prohibitions against racial discrimination in voting. But that rationale was just a pretext, introduced after the fact to justify the question and meant to obscure the administration’s actual reasoning, the justices found.

Had the administration decided to continue pursuing the citizenship question, it would have had to race to support its decision with more valid reasoning in order to print the census forms on time.

Trump ultimately decided against doing so, instead issuing an executive order in July 2019 that instructed the US Census Bureau to estimate citizenship data using enhanced state administrative records. Trump suggested at the time that the data could be used to draw electoral districts in 2021 based on where eligible voters live, as legislators in Texas, Arizona, Missouri, and Nebraska had already sought.

Trump has facilitated the creation of that data, though it’s not clear just how accurate it is. The executive order authorized the Census Bureau to collect more data from US Immigration and Customs Enforcement, US Customs and Border Protection, and US Citizenship and Immigration Services in an attempt to identify the citizenship status of more people. The bureau later started asking states to voluntarily turn over driver’s license records, which typically include citizenship data, to determine the citizenship status of the US population.

Tuesday’s memorandum represents the culmination of those efforts, which immigrant advocates see as a blatant attempt to strip resources and political power from brown and Black communities.

“This odious memorandum reaffirms what we already knew: this White House does not see immigrants as people,” Krish O’Mara Vignarajah, president and CEO of Lutheran Immigration and Refugee Service, said in a statement. “Does the DACA recipient treating COVID-19 patients in the ICU not count? Do the undocumented workers in the agricultural industry who are quite literally putting food on our tables not count? The inhumanity alone is astounding.”

Every day at Vox, we aim to answer your most important questions and provide you, and our audience around the world, with information that has the power to save lives. Our mission has never been more vital than it is in this moment: to empower you through understanding. Vox’s work is reaching more people than ever, but our distinctive brand of explanatory journalism takes resources — particularly during a pandemic and an economic downturn. Your financial contribution will not constitute a donation, but it will enable our staff to continue to offer free articles, videos, and podcasts at the quality and volume that this moment requires. Please consider making a contribution to Vox today.