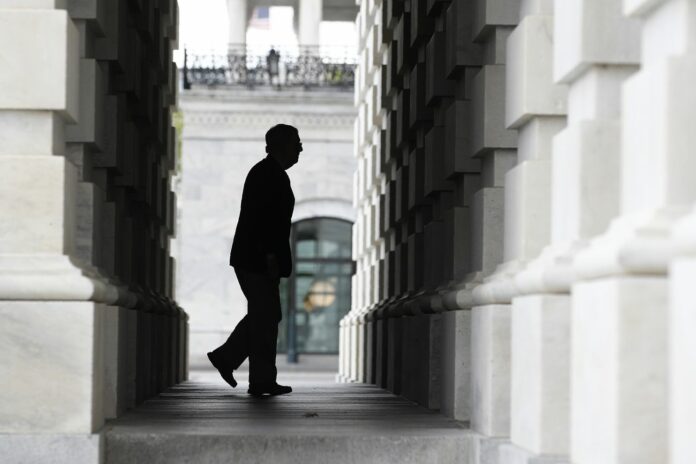 President Trump sought to draw a hard line on the coronavirus relief bill Sunday, saying it must include a payroll tax cut and liability protections for businesses, as lawmakers prepare to plunge into negotiations over unemployment benefits and other key provisions in coming days.

Trump also said “we do need some kind of immunity” in the bill. Senate Majority Leader Mitch McConnell (R-Ky.) has repeatedly insisted the legislation must include liability protections for businesses, health-care providers, schools and others. Democrats oppose this, too.

Trump downplayed the spikes in coronavirus infections nationwide, arguing they are because of high levels of testing, something health experts in his own administration dispute. He also argued the economy is “expanding and growing beautifully,” blaming Democratic governors for shutdowns he insisted were designed to hurt him in November.

Trump’s comments come as Senate Republicans are exploring new limits on emergency unemployment benefits for people who were high earners before losing their jobs, according to two people who spoke on the condition of anonymity to discuss details of internal planning.

If the White House and Senate GOP priorities make it into the bill, the legislation would effectively cut taxes for people who have jobs while cutting benefits for the unemployed.

McConnell is expected to introduce an approximately $1 trillion stimulus bill in coming days that will include a limited extension of the federal unemployment benefits approved by Congress in March. Those benefits are set to expire as soon as this week.

Republicans are seeking to curb the current infusion of federal spending on unemployment benefits as they try to constrain the overall cost of the relief package, which is likely to include expensive priorities such as state aid and school funding, among other urgent policies to deal with the pandemic.

With a substantial number of conservative Republicans wary of spending too much additional federal money, GOP lawmakers have discussed proposing the federal benefit be cut from an additional $600 per week to between $200 per week and $400 per week. The lower number is viewed as the likelier outcome in their bill, although aides cautioned negotiations are fluid and details remain in flux. McConnell is expected to release the legislation this coming week.

House Democrats passed a bill in May that would extend the $600-per-week threshold through January 2021. That bill would increase spending by roughly $3 trillion, and Trump threatened to veto it.

White House officials and GOP lawmakers have argued the current benefit creates a disincentive to work and must be phased out because they say Americans could make more money while collecting unemployment than in the workforce. Democrats and many economists have called for extending the $600-per-week increase to pump money into the economy and provide a financial lifeline for more than 30 million households.

Unemployment benefits are typically paid by states, but Congress has stepped in during severe economic downturns to add another layer of temporary aid paid by the federal government. There is often a debate over how and when to let these benefits expire. The unemployment rate in June was 11.1 percent, down from a recent peak in April but still higher than at any other point in recent history.

One idea discussed by Republican policymakers is to eliminate or curb the amount of additional federal unemployment benefits allocated to people who earned above a certain income threshold before losing their jobs. Exactly what that number could be remains unclear. Republicans are exploring similar measures to target another round of $1,200 stimulus payments for those toward the bottom of the income distribution, although it’s unclear how that would combine with Trump’s insistence on a payroll tax cut.

Limiting unemployment benefits to those further down the income distribution would help the GOP bring down the overall price tag of their bill. It could also raise new complications for the state unemployment offices that have already been overwhelmed by the complexity of getting funding out to an unprecedented surge of jobless Americans.

Andrew Stettner, a senior fellow at the Century Foundation, has estimated only 18.8 million of 33 million claims had been paid nationwide by the end of May. One person in communication with GOP offices, speaking on the condition of anonymity to discuss internal conversations, predicted the idea would ultimately have to be abandoned because of the administrative complexity the arrangement would create for state unemployment offices.

“State unemployment systems have struggled to handle the modest changes from the Cares Act,” said Adam Ozimek, chief economist at Upwork. “Given the backlogs and problems we have seen so far, we should be very hesitant to add the complexity of means-testing.”

The weekly payment to workers will depend on the overall amount devoted to unemployment benefits in the bill. GOP lawmakers have considered spending between $200 billion and $300 billion toward unemployment benefits through the end of the year in the coming stimulus package, according to one of the people who spoke on the condition of anonymity to share details of private negotiations. That money would help prop up consumer demand compared to allowing the benefit to expire altogether. It is substantially less than the $400 billion for the rest of the year that the U.S. would spend on additional unemployment benefits if the original increase were extended in full, depending on how the unemployment rate changes, according to Ernie Tedeschi, who served as an economist at the Treasury Department in the Obama administration.

The fate of unemployment benefits is likely to prove one of the key sticking points in congressional negotiations, with tens of millions of Americans financially dependent on the outcome. Senior White House officials have in recent days sought to limit the extension while also denying they are seeking to end federal unemployment benefits. Larry Kudlow, the president’s senior economic adviser, disputed Friday that the administration wants to dismantle the program.