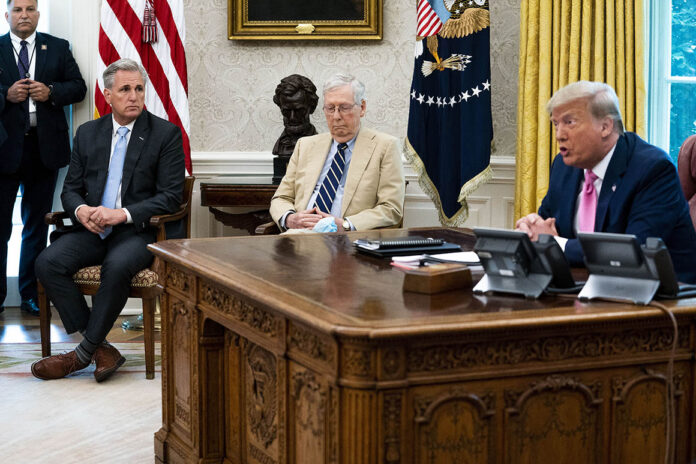 President Donald Trump and top administration officials are continuing to push for a payroll tax cut — but GOP leaders on Capitol Hill haven’t signed off on the proposal as Congress begins work on a new coronavirus relief package.

Trump and Republican leaders, however, are united on reducing unemployment insurance payments as part of their newest stimulus proposal, and they will call for additional direct payments to Americans as part of a $1 trillion package expected to be unveiled this week.

The negotiations kicked off Monday as lawmakers returned to Washington after a two-week recess that saw massive spikes in coronavirus cases in many states, as the U.S. continues to struggle to stem the spread of deadly virus.

Senate Republicans are also pushing for tens of billions of dollars in funding for testing for the states and additional funds for the Centers for Disease Control and Prevention, in addition to spending boosts for the State Department and Pentagon — money that the White House so far has resisted including in the new package. Trump administration officials have also floated new spending caps for next year’s budget, and they are seeking funding for other non-coronavirus projects, such as $250 million for FBI renovations, said GOP lawmakers and aides.

But Trump’s insistence on the payroll tax cut in particular is putting Republicans in a bind ahead of the negotiations, and it remains a nonstarter for Democrats. Both parties are pushing for another round of direct payments to Americans, though at different income thresholds.

“I think that when a person has a check in his hand … that’s going to do more economic good than if we dribble out $30 every paycheck,” Senate Finance Chair Chuck Grassley (R-Iowa) said.

Grassley also said a payroll tax cut “creates a public-relations problem” due to the perception that such a tax cut would draw from the Social Security fund. And Sen. John Cornyn (R-Texas) called it “problematic,” citing similar concerns.

Cornyn, whose state has seen a surge in Covid-19 cases in recent weeks, also said additional rounds of funding for state-level coronavirus testing “would be a good use of the money.” He previously criticized the White House for initially moving to ax federal funding for coronavirus sites in Texas.

Senate Republicans reiterated their calls Monday for additional money for testing. Sen. John Barrasso (R-Wyo.) said he wants to “make sure there’s funding to adequately deal with what we need to do with testing, with treatment and with vaccines,” while Sen. Roy Blunt (R-Mo.) rejected White House efforts to zero out on testing.

“I just think that’s wrong,” Blunt said. “We’re in the process of developing tests that would be easier to take, quicker responded to. If you’re going to get people back to school and back to work, having those kinds of tests is really important. ”

Trump has attributed the increase in virus cases to an increase in testing, even suggesting that testing should be scaled back overall. But case numbers have increased at a far higher rate than testing capacity increases.

Following a meeting Monday at the White House with Trump, Treasury Secretary Steven Mnuchin and Senate Majority Leader Mitch McConnell, House Minority Leader Kevin McCarthy said that the payroll tax cut would likely be included in a GOP proposal. During that meeting, Trump doubled down on the issue, calling it “very important.”

“It’s a tremendous saving and an incentive for companies to hire their workers back and to keep their workers,” Trump told reporters afterward.

McCarthy reiterated that the GOP proposal will center “on getting the economy moving again” and will be “focused about the kids’ safety and the teachers as well.” Mnuchin said the negotiations will kick off with a $1 trillion price tag.

Speaking from the Senate floor Monday afternoon, McConnell called the Senate GOP proposal “a strong starting point” — an acknowledgment that reaching a consensus will require negotiating with Democrats, who control the House. He did not mention the payroll tax cut.

“It would neither be another multitrillion-dollar bridge loan to make up for a totally shut down economy, nor an ordinary stimulus for a nation ready to get back to normal,” McConnell said. “The need now lies somewhere in between.”

McConnell reiterated that the U.S. is “nowhere near out of the woods” when it comes to the spread of the deadly virus, and said lawmakers must take “strategic steps to help laid-off American workers get rehired and American families get their kids back in school this fall.”

Unemployment benefits are expected to be a major sticking point in the negotiations. The March CARES package included an additional $600 in benefits to individuals that Republicans argue discourages individuals from returning to work. Without congressional action, the benefits will expire in the coming days.

Sen. Rob Portman (R-Ohio) said Monday that “we ought to continue some assistance but we ought to also figure out a way to customize it to the individual so you don’t have a disincentive to work.”

Democrats, including Speaker Nancy Pelosi and Senate Minority Leader Chuck Schumer remain insistent that the increased unemployment assistance payments continue. The House included it as part of the $3 trillion Heroes Act, passed two months ago, although McConnell refused to take up the measure.

Another top priority for Senate Republicans will be liability protections for businesses and other entities. McConnell has circulated a summary of the proposal, which would offer protections to schools and companies from lawsuits over coronavirus exposure. Democrats so far have shown little openness to the idea, though they haven’t drawn their own red lines opposing it.

Mnuchin and White House chief of staff Mark Meadows plan to speak with Senate Republicans at their weekly lunch Tuesday. Meadows is also planning to meet with Senate Appropriations Chair Richard Shelby (R-Ala.) along with Senate HELP Chair Lamar Alexander (R-Tenn.) and Blunt later Monday afternoon. And on Tuesday afternoon, Pelosi will host Schumer, Meadows and Mnuchin in her office for a meeting on the next coronavirus bill.

Senate Democrats are vowing to only negotiate alongside House Democrats. In a letter sent to his caucus Monday, Schumer urged party unity ahead of the negotiations and reminded Democrats that was their strength during the March CARES package.

“It was our unity against a partisan, Republican first draft that allowed for significant improvements to be made — improvements that have benefited millions upon millions of Americans,” Schumer wrote in the letter. “I hope we will not have to repeat that process. But we will stand together again if we must.”