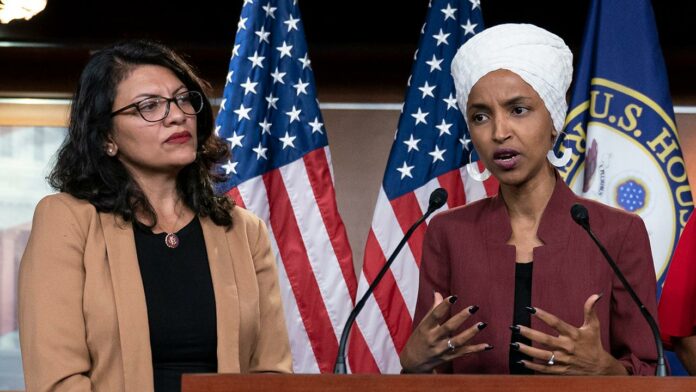 Two of the four members of the group known as “The Squad” – an influential group of progressive first-term minority congresswomen – are facing serious Democratic primary challengers in the coming weeks.

In Minnesota’s heavily Democratic 5th Congressional District – which covers much of the city of Minneapolis and was ground zero for the nationwide protests sparked by the death of George Floyd – freshman Rep. Ilhan Omar is facing multiple challengers on the Aug. 11 primary vote, including one challenger who has dramatically outraised her.

And in Michigan’s overwhelmingly Democratic 13th Congressional District, which includes parts of Detroit and the inner suburbs of Wayne County, the Aug. 4 primary is a rematch from two years ago, as first-term Rep. Rashida Tlaib is trying to fend off Detroit City Council President Brenda Jones.

The district was held for more than half a century by John Conyers Jr., a co-founder of the Congressional Black Caucus who died last year. When Conyers stepped down in 2018 amid accusations of sexual harassment, Jones briefly held the seat after narrowly edging Tlaib in a special election to fill the rest of Conyers’ term.

But Tlaib won a separate election for the new two-year term, starting in 2019. That election included six candidates. Jones, who is Black, now enjoys the support of the other four candidates from the 2018 election. Tlaib is Palestinian-American — and she made history alongside Omar in 2018 as the first two Muslim women elected to Congress.

Race is a factor in the 2020 primary rematch.

“Making the argument to Detroiters that you should have another African American representative in Congress has historically been somewhat of a powerful message, and Jones is a known quantity as city council president,” noted Susan Demas, a Michigan based political analyst and editor-in-chief of the Michigan Advance.

“I think the biggest weakness that Tlaib has is she’s not African American and she’s representing a majority minority district. Brenda Jones is. Will that make difference to voters given the fact that Tlaib is a person of color, she’s highly progressive, and is a known quantity in the district – that remains to be seen,” Demas said.

But Tlaib – a talented campaigner and fundraiser – has a massive campaign cash advantage over Jones, who was sidetracked from fundraising after contracting the coronavirus.

“Tlaib has a lot of advantages, between money and incumbency. It’s frankly just so difficult to campaign during a pandemic, to that gives incumbents even more of an advantage,” Demas highlighted.

BATTLE FOR THE HOUSE: LEADING HANDICAPPER MOVES 20 RACES TOWARDS DEMOCRATS

Tlaib is no stranger to the spotlight. She made headlines the day she was sworn into Congress in January of last year, using an expletive in pushing for President Trump’s impeachment.

“We’re going to impeach the motherf****r,” Tlaib said at the time.

And she made headlines last year for booing 2016 Democratic presidential nominee Hillary Clinton at a rally in Iowa.

Jones argues that Tlaib has ignored her district as she’s become too preoccupied with national issues.

“You can be vocal, but the things that were being done — like calling the president a ‘MF’ or booing Hillary — every time something like that happened, I was getting calls from people saying ‘You’re more professional than this,’” Jones told The New York Times. “I’m not interested in being a rock star. I’m just interested in bringing home the money, working for the people of the 13th district and uniting the community.”

Tlaib pushed back against such arguments – saying her opponents are highlighting just a few high-profile moments and overlooking her legislative achievements. This year she’s teamed up with fellow lawmakers to shield constituents from high water bills and water shutoffs, which many argue disproportionately hurt people of color.

Omar’s also no stranger to the national spotlight and to controversy. But the attention surrounding the progressive lawmaker – and her Twitter feed – have made her a target of Republicans and even some fellow Democrats. Omar has made headlines for her repeated criticism of the president – as well as for making comments viewed as anti-Semitic.

DEMOCRATS RIDE ‘GREEN WAVE’ AS THEY TRY TO RETAKE SENATE

Omar, who’s considered the favorite in Minnesota’s Aug. 11 primary, last week landed endorsements of some of the biggest names in politics — including House Speaker Nancy Pelosi and Sen. Bernie Sanders of Vermont.

Omar also enjoys the support of leading Minnesota Democrats, such as state House Speaker Melissa Hortman and Attorney General Keith Ellison. And she has the backing of local unions and the state party as she runs for a second two-year term.

But in the crucial battle for campaign cash, she’s been walloped by her main primary challenger, Antone Melton-Meaux.

The lawyer and mediator hauled in an eye-popping $3.2 million in the April-June quarter of fundraising, according to filings with the Federal Election Commission. That far surpassed Omar, who raised nearly half-a-million dollars during the same period of time. Melton-Meaux reported having $2 million in his campaign coffers as of the end of June, nearly double of Omar’s $1.1 million cash on hand.

Former Minnesota Democratic–Farmer–Labor (DFL) Party Chairman Mike Erlandson told Fox News that “there’s no question that the elevation of the race in the 5th Congressional District to a national race has clearly helped Omar, and Ellison before her, with the national fundraising base. But now we are seeing that it is also having an impact on a challenger.”

Melton-Meaux’s haul is a dramatic surge from the first quarter of the year, when he raised roughly $210,000. Much of the money came from outside of the District — and some of it came from conservative donors and pro-Israel groups.

The candidate – who says he supported Omar’s 2018 campaign – pointed to the controversies surrounding the congresswoman as the reason why he decided to run for office.

Melton-Meaux argued in an interview with The Hill that Omar had “lost the trust of the Jewish community by her insensitive and harmful tropes.”

Omar has worked to repair any potential damage – holding regular discussions with the Minneapolis Jewish community – and supported House resolutions condemning anti-Semitism amid the shooting last year at a Poway, Calif., synagogue.

Taking aim at her challenger’s fundraising, Omar political aides said in a statement to the Minneapolis Star Tribune that “our campaign is about organizing people. That’s what progressives do. And organized people will always beat organized money.”

Fellow “Squad” member Rep. Alexandria Ocasio-Cortez also faced a well-financed Democratic primary challenger last month in the New York primary. Former CNBC correspondent and anchor Michelle Caruso-Cabrera hauled in roughly $2 million ahead of the contest. But Ocasio-Cortez dramatically outraised her rival and crushed Caruso-Cabrera and other challengers in the contest.”

The fourth member of “The Squad” — Rep. Ayanna Pressley who represents Massachusetts’ 7th congressional District – doesn’t face a Democratic primary challenge in the state’s Sept. 1 primary. And she may not face a Republican in November’s general election, as none qualified to place their name on the primary ballot.