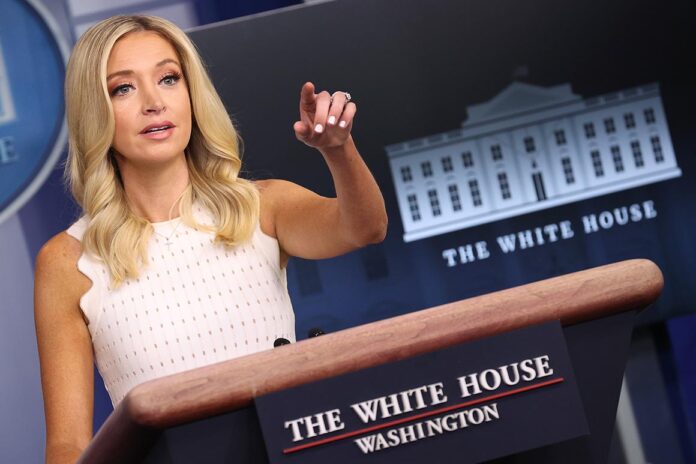 He added: “They’re more a blunt instrument of what Trump thinks is wrong with the press rather than informing the public.”

Yet Trump’s backers see it as an important chance to capitalize on the public attention the gatherings receive, airing the administration’s points before they are put through the media filter.

“I think Kayleigh uses this as an opportunity, knowing how many people are watching these briefings, to get across key points,” said former White House press secretary Sean Spicer. “Reporters look at this as chastising the press but it’s also an opportunity to get a message out. It’s a vehicle to talk about something going on with the coverage.”

White House press briefings under Trump had a freewheeling — and infamous — start, with Spicer walking out on a Saturday evening to falsely state that the president’s inauguration size was “the largest audience to ever witness an inauguration, period, both in person and around the globe.” In the weeks and months that followed, the fireworks and verbal sparring between Spicer and members of the press made the briefings must-see TV.

Yet under Spicer’s successor, the press room briefings ground to a halt, replaced with off-camera gaggles and TV appearances. Sanders’ successor, Stephanie Grisham, did not hold one briefing in the press room during her time in the role.

Just as McEnany brought back briefings at the beginning of May, the president appeared to scale back his own press conferences.

His daily coronavirus briefings, which sometimes went on for multiple hours as he took round after round of questions from reporters, faded away as the economy, and not the virus, became more of a focus at the White House. There were efforts to modulate the president’s appearances after he and his advisers fielded criticisms for the president’s conflicting claims about the virus and controversial suggestions about therapeutics like hydroxychloroquine or even injecting bleach.

A White House official defended the administration’s accessibility, noting that since April, the president has taken questions from a gathering of reporters over 55 times. Many of those appearances are from the daily coronavirus task force briefings, however, which tailed off at the end of April. Trump has also held 27 interviews during June and July — a vast majority of which were with conservative or friendly reporters like FOX News’ Sean Hannity or conservative commentator Michael Savage.

“President Trump is by far the most accessible president in history,” said deputy press secretary Sarah Matthews. “He’s his own best messenger, routinely informing the American people of his thoughts via his Twitter and regularly making himself available to the press for questions.”

Most recently, Trump went two weeks without answering questions from a group of reporters in public, opting instead for one-on-one interviews. CBS News’ Paula Reid asked McEnany about the decision on Wednesday.

“This president routinely answers questions,” McEnany said. “He’s more accessible than any of his predecessors. I’m sure you’ll be hearing from him soon. He’s always up to the job, but he’s hard at work in the Oval Office.”

Late on Thursday, Trump did answer a question from a pool reporter.

Battles between the White House and media have been constant since Trump’s first day in office. At times the situation has even escalated to attempts to rescind the press credentials of specific reporters, like CNN’s Jim Acosta. And numerous outlets have, in the past, complained about being left out of off-camera briefings from the press secretary.

While McEnany has resumed on-camera briefings with reporters, it has not stopped the tussles over media coverage. McEnany has frequently used the podium to offer her own critique of press coverage.

On Monday, for example, after a spate of deadly shootings over the weekend, McEnany pointed out that not one of the questions she was asked touched on the violence. Instead the focus was on Trump’s tweets attacking NASCAR driver Bubba Wallace, who is Black, and claiming that NASCAR’s decision to ban the Confederate flag had led to lower TV ratings, even though the opposite appeared to be true.

And last week, following a report from The New York Times about Russia paying bounties to Taliban-linked militants, McEnany slammed the story as “false” and then ticked through a prepared list of stories she claimed the Times had wrong.

The format appears by design. McEnany keeps her appearances short and often comes armed with an opening statement — which is typical for press secretaries — but then a closing thought that slams news coverage.

For example, her second briefing ended by asking the press if they would take back statements downplaying the coronavirus. A month later, she asked why reporters had not posed a question about Michael Flynn, Trump’s first national security adviser who may have his guilty plea dismissed. Another time, a question about Susan Rice was flipped to launch a prepared narrative about an Oval Office meeting during which Rice had discussed Flynn.

On another occasion, she dove into a soliloquy about the dangers of erasing history, questioning why HBO had removed “Gone with the Wind” — even though it was a temporary move — and mentioning the Japanese American internment camps under President Franklin Delano Roosevelt. “Should he be erased from history?”

To press advocates, the strategy is intended to avoid a substantive discussion.

“Now this is like some kind of political kabuki theater,” said Frank Sesno of the School of Media and Public Affairs at George Washington University and a former CNN White House correspondent who covered multiple administrations.

“Yes, there is someone speaking for the White House, and yes they are behind the camera and behind the podium,” he added. “That’s a good thing. But as far as providing any real information or background on the actual workings of the White House, forget it, not happening.”

The president has also recently avoided taking questions in the Rose Garden, even at events billed as being opportunities for the press to ask questions. Last week, the president announced a “news conference” on jobs numbers, but then stepped away shortly after commenting to the cameras. And during a press conference on job numbers and the economy — at the height of a national uproar over the death of George Floyd — the president bucked social-distancing guidelines by gathering the press closely together but then refused to take questions. Aides say they can never predict when the president will be in the mood to engage.

The lack of questions from the press comes as the Trump campaign has criticized presumptive 2020 rival Joe Biden for largely avoiding answering questions. Last week, Biden, who has been strict about following the government’s social-distancing guidelines, held his first press conference in 89 days. His previous press availability — back at the beginning of the spring — was done virtually to avoid gathering reporters in one space during the coronavirus.

Trump campaign spokesman Tim Murtaugh told POLITICO at the time that Biden’s press event on July 1 shouldn’t be “a news event in itself.”

“That it’s notable is embarrassing for him,” he said. “This is something a national candidate should do as a matter of course.”