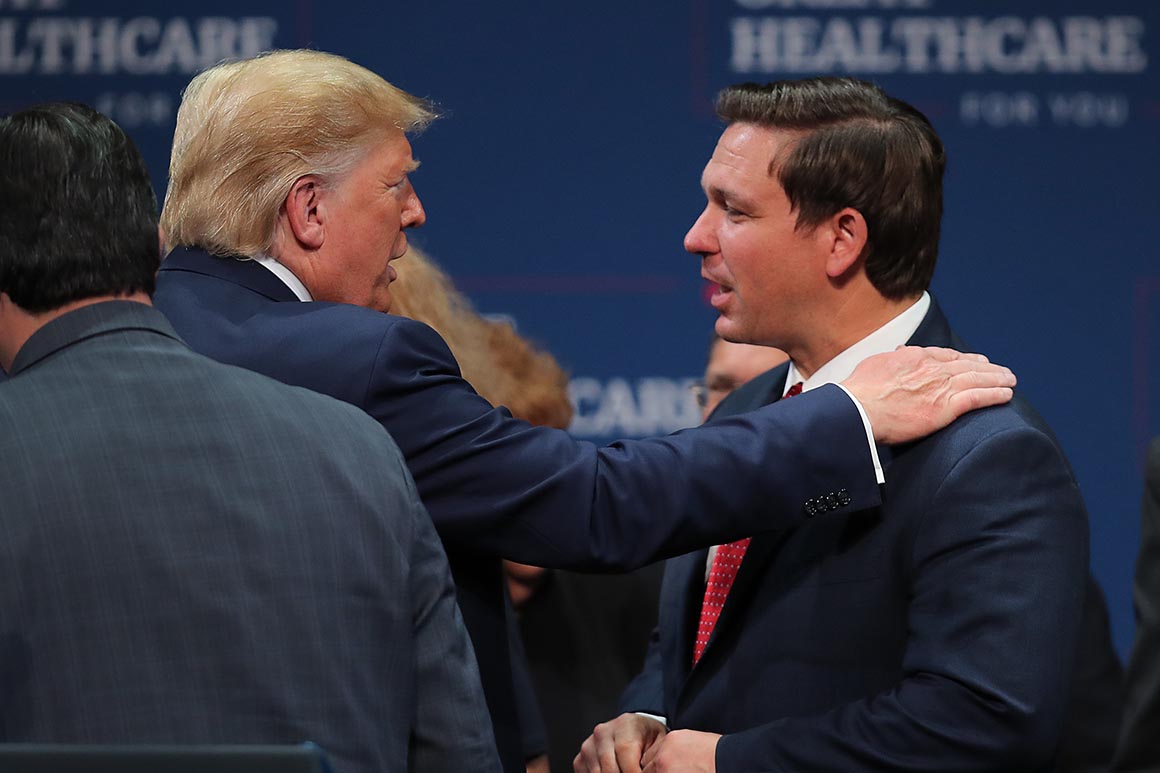 As of last week, only about 5 percent of applicants had received benefit payments. And that was before the state felt the full effect of the devastation to its travel and tourism industries, as Walt Disney World furloughed tens of thousands of employees.

“I am the biggest Florida skeptic on the planet,” said Matt Bennett of the center-left group Third Way. “Before the crisis, I was of the view that Florida was a complete lost cause,” after “that godforsaken swamp broke my heart in 2000 and then again 2016.”

Now, he said, between DeSantis’ delayed stay-at-home order and the state’s overwhelmed unemployment system, “I think that puts Florida back in play.”

An University of North Florida poll from early April supports that assessment: Biden led Trump by six percentage points — his biggest lead in any Florida poll this year.

“DeSantis might f—k Florida up for Trump … Everybody saw all the spring breakers on the beach. That’s an indelible image. Once people see that, they don’t forget it,” said Pete Giangreco, a Democratic strategist who has worked on nine presidential campaigns.

Nationally, Giangreco said, the virus has, at a minimum, put Trump “in more of a defensive posture.”

In neighboring Georgia — where communities of color appear to have been disproportionately affected and where the rate of jobless claims earlier this month were tracking second only to Michigan, according to Tax Foundation calculations — Democrats see a similar opportunity to tap into the electorate’s unrest.

A senior Biden campaign official said the campaign sees a widening path into states with high numbers of working-class voters and people of color, such as Arizona and Georgia, noting unemployment claims that have hit Georgia particularly hard.

Three-quarters of black voters in competitive states say their lives have been affected by the coronavirus, and 46 percent of them have lost a job or work hours because of it, according to a survey of 800 registered black voters in Florida, Georgia, Michigan, Minnesota, Nevada, North Carolina, Pennsylvania and Wisconsin released last week by the progressive-leaning advocacy group BlackPAC.

“In places where we’ve gotten a lot closer, like Georgia and Florida, could that also spur young black voters to vote?” said Amelia Matier, a Democratic strategist who worked on Pete Buttigieg’s presidential campaign. “Florida has f–ked up so bad … [and] North Carolina is definitely in play.”

She said, “People think that it’s all about having someone better, and you do need a very good candidate. But what you need first and foremost is a goddamn good reason to fire them.”

In the Midwest, many Democrats saw the party’s victory in a Wisconsin Supreme Court race earlier this month as a reflection of a map tilting away from Trump. The contest, in a swing state that will be critical to Trump’s fortunes this fall, was important enough that the president himself endorsed the GOP’s preferred candidate.

“The map is bigger now,” said Doug Herman, who was a lead mail strategist for Barack Obama’s 2008 and 2012 campaigns. “It doesn’t mean it’s easier. It just means that there’s a bigger play.”

Michigan and Pennsylvania — both of which voted Republican for president in 2016 for the first time in three decades — have been two of the states hardest hit by the pandemic’s economic fallout. Biden is running ahead of Trump in polling in both states.

Jill Alper, a Michigan-based Democratic strategist and veteran of multiple presidential campaigns, pointed to an ABC News/Washington Post poll that found Trump’s overall approval rating dropping among people whose lives have been most disrupted by the crisis. “His approval is lower in states with higher-per capita infection rates, and one of those states is Michigan,” Alper said.

In a solid-Democratic or solid-Republican state, that likely wouldn’t make a big difference. But in a battleground or near-battleground state, it could single-handedly change the outcome.

“People here need look no further than their Facebook feed to see stories of friends and family suffering joblessness, closing a business, or worse yet, noting loved ones who are sick or who’ve lost their lives,” she said. “I see it, everyday. That matters a great deal in a state like Michigan that could be won or lost on the margins.”

Still, in an election that is likely to be framed almost exclusively around issues of an economic recovery, even a slight positive shift in public opinion about Trump’s handling of the economy could be enough to tilt a marginal state, such as Nevada or New Hampshire, in his favor.

“You could see a 2- to 4-point movement in any state, frankly,” said former Rep. Ryan Costello, a Republican from Pennsylvania.

In that uncertain environment, many Democrats have become increasingly anxious about defending states that once appeared more comfortable for them.

“I don’t know how a 15-plus percent unemployed population is going to view this race when it becomes a race,” said Megan Jones, a former Harry Reid adviser and Nevada-based Democratic consultant who advised Kamala Harris’ presidential campaign. “There’s no oxygen right now to even have a discussion about the choice in front of voters because they’re too worried, and rightly so, about their health and their job.”

Noting that Trump won six key states — Arizona, Florida, Michigan, North Carolina, Pennsylvania and Wisconsin — by just more than 455,000 votes in 2016, and that unemployment claims have risen in those states by more than 4 million, Cowen Washington Research Group’s Chris Krueger wrote in a note for clients Tuesday that “recessions generally destroy Presidential re-elects.”

However, while the “data looks awful,” he asked, “does it look this bad in 8 weeks & who do people blame?”

Republicans are not unaware of the challenges confronting Trump. But if the pandemic is receding by fall and the economy is recovering, the tide may shift — and he may be able to influence the narrative in some states through his bully pulpit or by administrative fiat.

After many Nevadans fumed about rules prohibiting small casinos from accessing emergency small business loans. Trump called Nevada a “great state,” adding that “they do a great job. So, I’m going to look at it very strongly.”

On Sunday, he said he expects administration officials to make a ruling next week, after a previous adjustment to the rules failed to mollify Nevada lawmakers. “It’s a big topic,” Trump said. “Got a lot of people involved.”

Until now, Nevada had appeared to move further out of reach for Republicans in recent years, with Hillary Clinton carrying the state in 2016, and Democrats now controlling the statehouse.

But the financial reverberations of the pandemic are likely to be felt more acutely in Nevada than in many other states, as the hospitality industry waits for visitors to first become comfortable leaving their houses — and then become comfortable traveling and spending money.

Miller said, “If we are on the road to recovery, will he get credit for that? Or will people still look into the disaster of the response … I don’t know. You’re talking to a hard-core Democrat who hates the man, but there are people who like him.”

Of the states that Trump lost in 2016, Trump’s campaign and his allies have suggested that he could flip Nevada, New Mexico, New Hampshire or Minnesota this year. A Dartmouth College-UNH Survey Center New Hampshire COVID-19 Study found New Hampshire residents without college degrees were more likely to have lost a job or have had their hours reduced as a result of the coronavirus — and placed a greater emphasis on restarting the economy than maintaining social distancing.

Charlie Gerow, a Pennsylvania-based Republican strategist, said that in Pennsylvania, “My sense is that people really, really want to get back to work.”

By Labor Day, he said, Trump will be able to point to the pre-coronavirus economy as evidence of success, while comparing his response to the pandemic to that of a Democratic nominee who is out of office and making public appearances only via livestream from his house.

“The only thing that could really go wrong” for Trump, said Tom Tancredo, a former Republican congressman from Colorado, “is if the whole attempt to reopen goes into the dumper.”

The more likely outcome, he said, is that voters see Trump as “taking you through a war,” judge his performance favorably and conclude “you can’t change horses.”