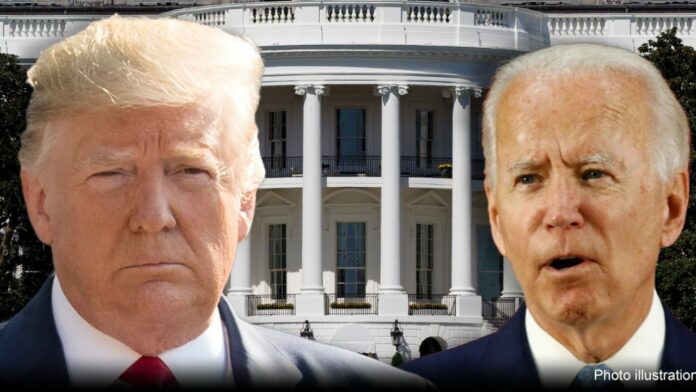 Team Biden said it expects President Trump to “lie through his teeth” at the first presidential debate between the two nominees — while downplaying the significance it could have on the race as Trump and Democratic nominee Joe Biden face off for the first time next week.

“Fox News Sunday” anchor Chris Wallace has been selected to moderate the first presidential debate between Trump and Biden, the nonpartisan Commission on Presidential Debates (CPD) announced earlier this month.

The debate is scheduled to take place Tuesday, Sept. 29 in Cleveland, Ohio.

A source familiar with the former vice president’s campaign told Fox News that they expect Trump will be “extremely practiced” and “prepared” to debate Biden. But the source that “there is no debate performance that can fundamentally shift the race because of what people are living through,” referring to the coronavirus pandemic.

“Everyone is stuck in a reality on account of Trump’s mismanagement, so there is no outcome during the debate that can really change the trajectory of this race,” the source told Fox News. “If Trump has a good debate, which we anticipate, and he has no compunctions about lying through his teeth and making things up on the spot, American life is still defined by his failure to have any plan to beat COVID.”

The source added: “We know Donald Trump is going to lie through his teeth, but Joe Biden’s goal is to share his agenda, his plan and his values.”

A former Biden staffer also told Fox News that “everybody knows” the president now, and said that people are “fully aware of how he operates and that he likes to lob insults and bait people by stating things that are not true.”

“If you make that the fact that he lies all the time the issue, that’s less compelling than talking about how his lies have caused harm to the country,” the staffer told Fox News. “[Biden] needs to make Trump’s behavior relevant to voters. It has to be grounded in something that matters.”

But Jay Carney, former White House press secretary for President Obama and former communications director for Biden as vice president, told Fox News that the debate itself could be a “challenge.”

“I know Vice President Biden sees this as a serious challenge,” Carney told Fox News. “President Trump has an advantage in that he is an expert at delivering memorable sound bites and engaging in short-form scrums.”

Carney added that Trump “gets in regular practice with all his short encounters with the press, and that kind of format, ironically, is close enough to what you experience in a debate that I doubt he’ll be rusty.”

Carney said, however, that he thinks Biden “will come in with a plan and will execute on it.”

“And then we’ll have to see how successful the president is in disrupting it,” Carney said.

The early months of Biden’s third White House bid were marked by uneven debate performances and winding town halls in Iowa and New Hampshire. The floundering led to numerous stories about Biden’s gaffes and near-constant attacks from Trump about Biden’s mental fitness.

Since then, however, the former vice president has drawn praise for both his performance against Sanders in March and, more recently, for his speech at last month’s Democratic National Convention.

When asked whether the campaign was concerned about a debate night gaffe from the former vice president, the source defended Biden, saying that “the American people know this about him.”

“In fact, it makes him more relatable to them,” the source said, while adding that the campaign “does not see the debate as a very big inflection point in the race.”

“We see that as something only the media cares about but that voters don’t,” the source added.

And former communications director for Pete Buttigieg’s presidential campaign, Lis Smith, shared a similar sentiment, saying that his gaffe-making is “part of his appeal.”

“He comes across as a genuine, regular guy, and not like an overly programmed politician,” Smith said. “The narrative as Biden as a gaffe machine overlooks the reality that Joe Biden’s brand is being good ol’ regular Joe, Uncle Joe, and sometimes the things he says don’t come out quite right, but that’s part of his appeal as a politician.”

She added: “Some people underestimate how baked in the cake some of this is about Joe Biden and how the fact that he isn’t a slick-talking, points-oriented politician works to his benefit. Most people don’t speak in perfect prose.”

But Trump has seized on Biden’s gaffes along the campaign trail, questioning whether the former vice president was taking medication to enhance his primary debate performances — a topic he has raised repeatedly in the past several weeks, while calling for a mandatory drug test ahead of the general election debates.

Trump offered no evidence to support his claims nor did he say what drug he thought Biden was taking.

The president, during an exclusive interview with “Fox & Friends” Monday, though, said he thinks Biden is “a professional.”

As for his strategy should Trump lob personal attacks at the former vice president, the source told Fox News that Biden “will certainly stand up for himself and for American families.”

But others familiar with Biden’s debate style suggested that he would rise above any insults, or personal attacks, by responding with arguments rooted in policy shortfalls of the Trump administration.

“What was interesting watching the primary debates was that Biden did not engage when his primary opponents attacked him,” Smith told Fox News. “He was usually one of the big targets, and did face a number of nasty, fairly personal, attacks, but what I saw, and what we all saw, was that he sort of just brushed them off, laughed them off and kept going back to his own message rather than going down the rabbit hole of responding.”

She added: “That’s going to be a really critical skill against Trump.”

Smith said she anticipates the president will “do everything in his power” to get Biden “off message and in the mud with him.”

“I just think history has shown that if you get down in the mud with Donald Trump, you probably won’t come out a winner of that one,” Smith said. “And that sort of discipline is going to be really important.”

Carney also told Fox News he thinks Biden “will stick to his plan and avoid getting into an insult competition.”

He added: “There are ways to do that but not make it personal – where Biden can make the case, for example, that the president’s response to COVID-19 has been a failure and that he would do a better job. He can do that on a lot of issues. He can make the contrast without getting into name-calling.”

Meanwhile, as Team Biden is downplaying the debate’s impact in general, Team Trump is ramping up expectations, after months of undermining Biden’s abilities to take on the president.

“Joe Biden has been a Washington politician for 47 years, he spent decades in the Senate where all they do is debate, he was vice president twice, and debated on the national stage in each of those races, and did very well,” Trump campaign Communications Director Tim Murtaugh said in an interview with Fox News Monday.

“In the Democrat primaries, he debated a whole crowd of opponents, 11 times, and he won,” he continued. “He bested two dozen Democrat challengers.”

Murtaugh added that Biden “knows his way around the debate stage.

“He knows how to do it,” he said. “He’s actually quite good. That’s the Joe Biden we expect to see on debate night.”

Murtaugh added: “We have to be prepared for the tuned-in Joe Biden.”

Nevertheless, those in Biden’s camp are maintaining that the debate will have little influence on the race in general.

“[Debates] used to have that potential to change things, but what seems to be true more and more is that they don’t have a significant impact on the race,” Carney told Fox News, while adding that the race “has been static, in Vice President Biden’s favor, for a long time, which means the president needs to find a way to disrupt the trajectory of the race.”

“The debates give him an opportunity to do that,” he said.

“I think everyone is trying to build up the debate as a potential game-changer in this contest, but the story of 2020 has been a story of remarkable stability,” Smith added. “And if a global pandemic can’t fundamentally shift the dynamics of the race, I doubt the debate will.”