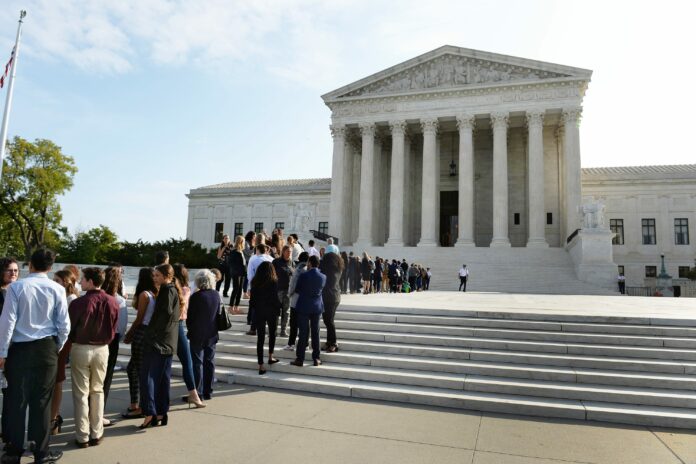 The Supreme Court on Thursday ruled that a huge swath of Oklahoma is Native American land for certain purposes, siding with a Native American man who had challenged his rape conviction by state authorities in the territory.

The 5-4 decision, with an opinion authored by Justice Neil Gorsuch, endorsed the claim of the Muscogee (Creek) Nation to the land, which encompasses three million acres in eastern Oklahoma, including most of the city of Tulsa.

The decision means that only federal authorities, no longer state prosecutors, can lodge charges against Native Americans who commit serious alleged crimes on that land, which is home to 1.8 million people. Of those people, 15% or fewer are Native Americans.

“Today we are asked whether the land these treaties promised remains an Indian reservation for purposes of federal criminal law,” Gorsuch wrote.

“Because Congress has not said otherwise, we hold the government to its word,” he wrote.

The ruling in the case of convicted child rapist Jimcy McGirt, and in a related one Thursday by the Supreme Court involving another Muscogee Nation member, convicted murderer Patrick Murphy, overturns their convictions on state charges.

However, both men can now be prosecuted for the crimes by federal authorities, according to a lawyer for the tribe.

The cases hinged on application of the Major Crimes Act, which gives federal authorities, rather than state prosecutors, jurisdiction over serious crimes committed by or against Native Americans in Native American territory.

“For MCA purposes, land reserved for the Creek Nation since the 19th century remains ‘Indian country,’ ” Gorsuch wrote in the opinion in McGirt’s case.

Chief Justice John Roberts dissented from the ruling, as did his fellow conservatives, Clarence Thomas Samuel Alito and Brett Kavanaugh.

In his dissent, Roberts warned that “across this vast area” now deemed to be Native American land, “the State’s ability to prosecute serious crimes will be hobbled and decades of past convictions could well be thrown out.”

“On top of that, the Court has profoundly destabilized the governance of eastern Oklahoma,” Roberts wrote. “The decision today creates significant uncertainty for the State’s continuing authority over any area that touches Indian affairs, ranging from zoning and taxation to family and environmental law.”

“None of this is warranted,” Roberts added. “What has gone unquestioned for a century remains true today: A huge portion of Oklahoma is not a Creek Indian reservation. Congress disestablished any reservation in a series of statutes leading up to Oklahoma statehood at the turn of the 19th century. The Court reaches the opposite conclusion only by disregarding the ‘well settled’ approach required by our precedents.”

Oklahoma Gov. Kevin Stitt said, “I am aware the ruling in McGirt v. Oklahoma was handed down this morning by the U.S. Supreme Court.”

“My legal team has been following the case closely and is reviewing the decision carefully. They will advise our team on the case’s impact and what action, if any, is needed from our office,” Stitt said.

McGirt who was convicted by an Oklahoma state court of raping a four-year-old child in 1997. McGirt was sentence to 1,000 years in prison, plus life, for the crimes.

McGirt had argued in state courts that Oklahoma lacked the jurisdiction to review his case because the crime took place within the boundaries of the Creek Nation’s historic territory. He had appealed to the Supreme Court after state courts rejected his appeals.

The state of Oklahoma in turn argued to the Supreme Court that the Creek Nation’s claimed territory was not a reservation at all.

The state said that if the Supreme Court accepted McGirt’s reasoning it would “cause the largest judicial abrogation of state sovereignty in American history, cleaving Oklahoma in half.”

In court filings to support McGirt’s claim, the Muscogee (Creek) Nation noted that although the tribe had “no role in the genesis of this litigation” it “now finds its Reservation under direct attack.”

Riyaz Kanji, an attorney for the tribe, wrote in a filing that Oklahoma was “exaggerating” the jurisdictional problems that would ensure if the state lost its case.

“To the extent they hold any water, the State’s posited consequences stem from the fact that both executive branch and state officials actively sought to undermine Congress’s determination that the Nation’s government and territory would endure,” Kanji wrote.

He noted in the majority opinion that, “No one disputes that Mr. McGirt’s crimes were committed on lands described as the Creek Reservation in an 1866 treaty and federal statute.”

“But, in seeking to defend the state court judgment below, Oklahoma has put aside whatever procedural defenses it might have and asked us to confirm that the land once given to the Creeks is no longer a reservation today.”

Gorsuch flatly rejected that request by the state.

“Under our Constitution, States have no authority to reduce federal reservations lying within their borders. Just imagine if they did,” he wrote.

“A State could encroach on the tribal boundaries or legal rights Congress provided, and, with enough time and patience, nullify the promises made in the name of the United States. That would be at odds with the Constitution, which entrusts Congress with the authority to regulate commerce with Native Americans, and directs that federal treaties and statutes are the ‘supreme Law of the Land,’ ” he wrote.

Gorsuch added that if that happened, “It would also leave tribal rights in the hands of the very neighbors who might be least inclined to respect them.”

Kanji, in an interview after the decision, said that despite the arguments by the state and in Roberts’ dissent, “I don’t think this case is going to have earth-shattering consequences” on the residents of the land, be they Native American or not.

“It just doesn’t change anything with respect to non-Indians” in terms of criminal cases, Kanji said.

He said the tribe will be able to exercise civil and regulatory authority over the affected land, but noted that in areas that were already acknowledged by the state to be tribal land there already is “a  tremendous amount of cooperation” between the state and the tribe on laws and regulation.

“We would fully expect that cooperation to continue,” Kanji said.

He also noted that “the court itself has placed a lot of limitations on Indian tribes with respect to non-Indians” who live on tribal land.

McGirt’s lawyer, Ian Health Gershengorn, in an emailed statement said, “The Supreme Court reaffirmed today that when the United States makes promises, the courts will keep those promises.”

“Congress persuaded the Creek Nation to walk the Trail of Tears with promises of a reservation — and the Court today correctly recognized that that this reservation endures,” said Gershengorn, a partner at the firm Jenner & Block.

“We — along with our co-counsel Patti Palmer Ghezzi and the Federal Public Defender of the Western District of Oklahoma — are immensely pleased for Jimcy McGirt and Patrick Murphy, whom Oklahoma unlawfully prosecuted for alleged crimes within the Creek reservation.”

In the related case decided Thursday, the Supreme Court upheld a ruling by the 10th U.S. Circuit Court of Appeals that tossed out the murder conviction of the other Muscogee Nation member, Murphy, who was charged with killing a man on the tribal land in question.

In Murphy’s case, Gorsuch did not participate in the vote, because he had heard the case while serving on the lower appeals court.

The Supreme Court had heard arguments in Murphy’s case during its prior term, but declined to issue a ruling at the time. In the interim, it heard McGirt’s case, which made the same claims.