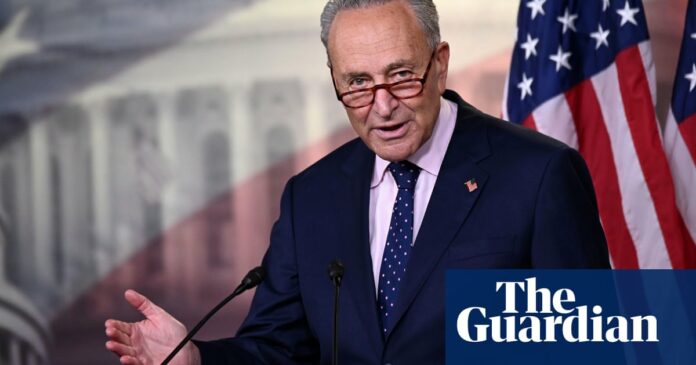 The resistance movement forged in the early days of Donald Trump’s presidency now faces perhaps its greatest challenge: keeping open a supreme court vacancy that, if filled, will cement a conservative majority for decades to come.

The death of Ruth Bader Ginsburg, the court’s most senior and celebrated liberal, set the stage for a furious battle over her replacement weeks before the election. On Saturday, Trump said he would move “without delay” to fill the vacancy, while the Senate majority leader, Mitch McConnell, vowed to hold a vote, and the judiciary committee chair, Lindsey Graham, made clear he would be part of the effort.

It was perhaps what Ginsburg feared. According to NPR, the 87-year-old justice dictated a final message to her granddaughter Clara Spera: “My most fervent wish is that I will not be replaced until a new president is installed.”

With control of every branch of government now in the balance, liberal groups are redoubling their efforts, pressuring Senate Democrats to deploy every tactic possible to stop Trump seating a third justice.

Democratic fury has been building ever since the death of Justice Antonin Scalia in February 2016, when McConnell made the unprecedented decision not to consider Barack Obama’s nominee, Merrick Garland, arguing it was too close to a presidential election.

“American people should have a voice in the selection of their next supreme court justice,” McConnell said.

Now, McConnell insists the circumstances are different, and that Trump’s nominee deserves a vote, even though Americans have already started to cast ballots in the presidential election.

“Let me be clear,” the minority leader, Chuck Schumer, told Senate Democrats in a conference call on Saturday, according to a source. “If Leader McConnell and Senate Republicans move forward with this, then nothing is off the table for next year.”

Ed Markey was perhaps the first member of the Senate to suggest retaliating by expanding the court.

“Mitch McConnell set the precedent,” the Massachusetts Democrat said on Twitter. “No supreme court vacancies filled in an election year. If he violates it, when Democrats control the Senate in the next Congress we must abolish the filibuster and expand the supreme court.”

“A basic principle of the law – and of everyday fairness – is that we apply rules with consistency, and not based on what’s convenient or advantageous in the moment,” Obama said. “The rule of law, the legitimacy of our courts, the fundamental workings of our democracy all depend on that basic principle.”

Brian Fallon, founder of the liberal judicial advocacy group Demand Justice, said: “Make no mistake, any supreme court with a Trump justice confirmed to Ruth Bader Ginsburg’s seat at this point in the calendar would be fundamentally illegitimate, and Democrats must be prepared to act accordingly.”

Democrats vowed to honor Ginsburg’s legacy by ensuring her replacement was not chosen by Trump. Fulfilling such a promise could require them to win not only the White House but the Senate, too. Even then, Republicans could try to push a nominee through in the lame-duck session.

Democrats were also shattering online donation records, according to ActBlue, a progressive online platform. In a 12-hour span after Ginsburg’s death was announced, it said, a stunning $31m came in.

Nan Aron, president of the Alliance for Justice, told reporters she had never seen liberals so energized over an issue that typically animates conservatives.

“I think people understand like never before just how huge the stakes are, not just for the court but for healthcare, civil rights, abortion,” she said. “Three and a half years of Trump judges has certainly educated progressives, [and] I think the country, just how critically important the judiciary is and how long after Donald Trump leaves office these judges will be there, signing our rights and freedoms.”

For decades, conservatives have organized around the supreme court, advocating for justices who might overturn Roe v Wade, the 1973 ruling that established the legal right to abortion. In 2016, Trump helped mollify conservatives wary of his unorthodox candidacy by committing to nominating anti-abortion judges. He repeated the exercise this month.

But there are signs the court is now an equally energizing issue for Democrats. According to a Pew Research Center poll last month, 66% of supporters of Joe Biden said the supreme court was a “very important” factor in their vote, compared with 61% of Trump supporters.

Simple math will guide how McConnell proceeds. Senate Republicans are defending a 53-seat majority. A handful of vulnerable incumbents and moderates have expressed concern about moving forward with a nomination so close to the election.

Assuming they win no Democratic votes, Republicans can only afford to lose three if they are to confirm a justice, with Vice-President Mike Pence the tie-breaking vote. Another wrinkle may be the race in Arizona to fill the vacancy left by John McCain. Should the Democrat Mark Kelly defeat the Republican Martha McSally, who was appointed to the seat, some experts believe he could be seated as early as the end of November, making the math of the supreme court fight even more precarious.

Ginsburg’s death also sparked finger-pointing, as some Democrats blamed the situation on the former Senate majority leader Harry Reid, for abolishing the 60-vote threshold for most presidential appointees in 2013, after Republicans refused to approve Obama’s picks for lower courts. In 2017, Republicans, under McConnell, abolished the 60-vote threshold for supreme court nominees.

The New York congresswoman Alexandria Ocasio-Cortez said Ginsburg’s death should “radicalize” progressive voters and motivate them to vote for Biden.

“Let this moment really put everything into stark focus, because this election has always been about the fight of and for our lives,” she said, in a video posted to Instagram.

Mass activism that began with the Women’s March in January 2017 helped deliver Democratic control of the House the following year. Now such activists hope the movement will not only help them remove Trump, but secure Ginsburg’s legacy.

On Saturday night, hundreds were expected at a vigil for Ginsburg on the steps of the supreme court. Though Democrats have not established a record of success in such fights – the effort to bring down Brett Kavanaugh failing most recently, in 2018 – progressive leaders were expected to pledge a campaign of unmitigated offense.

That sentiment is shared by Hillary Clinton, the 2016 presidential nominee who many believed would nominate Ginsburg’s replacement.

Speaking on MSNBC, Clinton urged Senate Democrats “to use every single possible maneuver that is available” to stop McConnell filling the vacancy. She called the Senate majority leader’s commitment to confirming Trump’s nominee a “monument of hypocrisy” that would result in “the greatest travesty”.