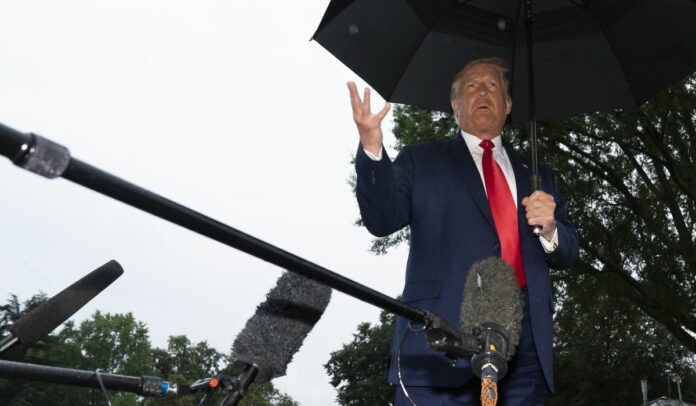 President Trump has been confronted with a series of false and unfounded conspiracy stories from the same liberal establishment that condemns the wild QAnon phenomenon, according to an analysis of the president’s nearly four years in office.

The press has lambasted the right-wing mystery persona of QAnon and its Internet-driven conspiracy theory that a cabal of Hollywood big-shots, Democrats and federal officials is involved in a pedophile ring determined to bring down the president.

The unfounded claims have captured the emotions of some conservatives. Mr. Trump hesitated at a press briefing to criticize the “Q” crowd even as Republican lawmakers roundly condemn its bizarre tales.

To be sure, Mr. Trump has stirred up the liberal media by sending out inflammatory tweets that bewilder even his conservative backers.

But at the same time, anti-QAnon liberals have embraced and promoted scores of Trump-deriding false stories and conspiracies. Some are bizarre, such as an international White House-based assassination scheme and a desire to exterminate Hispanics. Some are personal, such as “mini-strokes” and mental illness.

The Washington Times analyzed the left’s conspiracy culture and compiled a 35-item list (not all inclusive) dating back to Mr. Trump’s first day in office. Such stories fomented thousands of social media blogs and cable news.

Not true. The reporter apologized to White House later that day.

2. Day after the inauguration, the White House bused a “cheering committee” to the CIA for Trump’s talk to work force (CBS News).

The White House said that of 400 attendees,10 were White House-connected. None sat in first row.

3. Mr. Trump discussed the classified response to a North Korean missile test during large a dinner gathering at his Mar-a-Lago, Fla., estate with Japanese Prime Minister Shinzo Abe. Stories were based on a photograph of the dinner posted on Facebook. (New York Times. Feb. 13, 2017; CNN; Washington Post et al).

The White House said the press jumped to a “nefarious” conclusion. He was briefed in a Sensitive Compartmented Information Facility (SCIF) about the missiles before dinner. The discussion at the table was about press logistics for next day.

4. The new president was somehow responsible for scores of bomb threats phoned to Jewish Community Centers in America. (Vox.com; CNN: “Trump mentioned the bomb threats in his speech Tuesday, but did not outline a plan to stop them.”)

In March 2017, authorities arrested an Israeli teenager, Michael Ron David Kadar, for making hundreds of hoax bomb threats to Jewish centers in the U.S. and other countries. They then stopped.

5. Muslim American Olympic fencer Ibtihaj Muhammad was detained at Dulles airport because of President Trump who put in place travel restrictions in January 2017. A Democratic congressman said he was “sickened” by the report. (Washington Post, The Hill, USA Today).

She was detained for two hours in December 2016 during the Obama administration.

In January 2018, Mr. Trump’s annual physical included a cognitive test which the White House physician said he aced. Afterwards, some media reports said this didn’t prove he was not mentally ill

No investigative report has concluded this.

8. U.S. intelligence possesses a large number of intercepted communications between the Trump campaign and Kremlin spies going back to the campaign’s beginning. (New York Times, Feb. 2017.)

FBI says it has no such material. Former FBI Director James Comey said the story was wrong.

9. The Trump campaign was in a deep conspiracy with the Kremlin to hack Democratic computers and wage information warfare on social media. (news media; Democrats; Christopher Steele/Democratic Party dossier).

Special Counsel Robert Mueller did not establish this during his 22-month investigation.

FBI lead agent Peter Strzok says the dossier is filled with inaccuracies and disinformation. He said the document sent him on “wild-goose chases.” Department of Justice inspector general report dismissed the dossier as unreliable.

FBI concluded there was no such server.

FBI concluded no such trip happened.

Mr. Cohen, a Trump detractor, told Congress he knows of no Russian money flowing into the organization. The Trump Organization has sold condominiums to relatively few Russians, including one group of criminals.

There has been no public evidence.

Mueller report said no conspiracy talk at the Mayflower. There was a brief handshake reception line.

16. The FBI obtained a wiretap warrant on Trump campaign manager Paul Manafort, assessing he was a foreign agent for Russia. (CNN).

No such warrant was sought.

17. Manafort and volunteer Carter Page worked as a team to conspire with Kremlin. (Dossier; Fusion GPS.)

The two did now know or speak with each other.

The trips never happened. Mr. Mueller’s team didn’t even ask Manafort about the issue during hours of interrogation.

No public evidence to date. The Washington Times first reported that the NRA supplied information to a Senate committee on an outside audit that found no such money trail.

21. The Kremlin’s social media propaganda was so successful it seeded inaccurate mainstream media stories helping candidate Trump. (Washington Post, Nov. 24, 2016.) The source was a group of shadowing research firms (one is called PropOrNot) that made unsubstantiated claims against various web sites.

The Post attached a correcting editor’s note to the story. The liberal Nation magazine said “‘PropOrNot’ has smeared working journalists as agents of the Kremlin while wrapping itself in a cloak of anonymity.”

23. Flynn had some type of improper relationship with a Russian-born scholar at Cambridge University. (Wall Street Journal; other major U.S. newspapers).

Again, the FBI cleared him. The scholar, Svetlana Lokhova, a British citizen, says she met Flynn once at a dinner honoring the then-Defense Intelligence Agency director at Cambridge University, England. Never saw him again. In her suit, she blames FBI informant Stefan Halper for the smear.

FBI reported no evidence Ms. Lokhova is a Russian asset.

25. Billed as a “bombshell if true,” Mr. Trump told attorney Cohen to lie to Congress about aborted Moscow-Trump hotel deal.(BuzzFeed.)

26. 2018 election. “The Russians might this time actually play with the voting totals if there is a wave election and that would throw the entire election into doubt. And would essentially set the pace for civil war and that is what the Russians are looking for. Chaos is their principal weapon system here.” (Malcolm Nance, MSNBC.)

No evidence this happened.

His deputy director, Andrew McCabe, told a Senate committee there was no such request. The Department of Justice called stories “totally false.”

29. A secret Defense Intelligence Agency report delivered to the White House warned of a coronavirus outbreak in China in November 2019. (ABC News.)

The Pentagon says there is no such report.

30. Mr. Trump may kill off Hispanics. “He ramped it up again to the invasion, the warning people of the caravan and words like ‘infestation.’ What do you do with an infestation? With an infestation? The natural conclusion is to attempt extermination.” ( Raul Reyes, MSNBC contributor, August 2019.)

This has not happened.

32. On Trump supporters: “The behaviors I’m seeing here, and this is anecdotal, are very similar to the way that ISIS members are. They are true believers, this is their reality, and they will not surrender it. You know, they’re dead-enders.” (Malcolm Nance, MSNBC.)

33. Mr. Trump is communicating subliminally with neo-Nazis. “These people feel that they are the foot soldiers executors of what the disenfranchisement that the white race is feeling and Donald Trump is giving them subliminal orders in their head.” (Malcolm Nance, MSNBC.)

34. Mr. Trump, a billionaire, has an interest in a French pharmaceutical firm Sanofil, which produces a brand name of hydroxychloroquine. (New York Times)

The president has taken HCQ and promoted it as a treatment for COVID-19. So have a number of physicians. Mr. Trump’s “assertiveness” in promoting the drug contrary to the recommendation of top health experts “has raised questions about his motives,” the New York Times April 2020 story said.

Mr. Lockhart tweeted Aug. 1: “Did @realDonaldTrump have a stroke which he is hiding from the American public?”

Mr. Winslow tweeted Aug. 1: “One of the benefits of making videos that garner 5 million + views is that you hear from a lot of people, including whistleblowers inside Trump administration. I’ve received three communications saying that during his term Trump has suffered a ‘series’ of ‘mini-strokes.’”

Mr. Trump has denied this. His doctor said there have been no mini-strokes.

Besides the president’s railing against the “fake news” industry, the Trump administration’s chief media critic is Attorney General Barr. He calls the liberal media a “collection of liars” for their muted coverage of Antifa/Black Lives Matter destructive riots. Conservatives say the media ignored the violence and lawbreaking, terming them “mostly peaceful protests.”

Mr. Barr also mocks the Russian-obsessed press for a lack of self-awareness.

“I agree with you that it’s been stunning that all we have gotten from the mainstream media is sort of bovine silence in the face of the complete collapse of the so-called Russiagate scandal, which they did all they could to sensationalize and drive,” Mr. Barr told Fox News host Maria Bartiromo. “And it’s, like, not even a ‘whoops.’ They’re just onto the next false scandal. So, that has been surprising to me: that people aren’t concerned about civil liberties and the integrity of our governmental process.”

He said on Texas Republican Sen. Ted Cruz’s podcast: “One of the stunning things, I’m sure you’ll agree, is that the media just went hell bent for leather on pushing this Russiagate story that Trump was essentially an agent of Russia. And they were merciless. And up until recently you had former senior government officials sort of talking knowingly about how the president was going to be indicted and so forth and so on.”