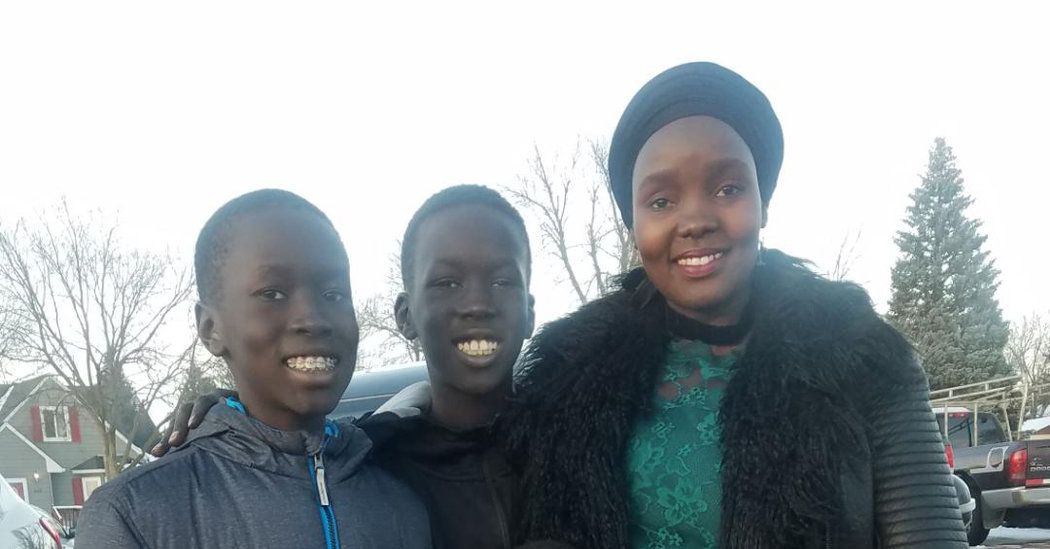 An immigrant from El Salvador bought a three-bedroom home with a basement for her family. A single mother from Ethiopia sent her daughters to college. A refugee from Sudan bought bunk beds for her boys, new couches and a dining table.

Before the Smithfield pork factory in Sioux Falls became the radiating core of South Dakota’s coronavirus outbreak, with more than 640 cases linked to the plant, it had been a kind of beacon of American prosperity for tens of thousands of employees who landed on the high prairie from Africa, East Asia and Latin America. But the opportunities were not obtained easily.

For more than 100 years, people fleeing war zones and abject poverty have put in long hours at the eight-story plant that churns 24 hours a day alongside the tree-lined Big Sioux River. They worked side by side in front of speeding conveyor belts and behind vibrating electric knives powerful enough to slice through a hog every 30 to 40 seconds. Many iced their wrists at night and relied on a daily dose of ibuprofen to keep up with the work of slaughtering, processing and packaging pork products for global consumption.

In return, they received wages above the minimum and health benefits that stretched far in a state with a low cost of living, uplifting generations of immigrants who arrived in the United States without formal education or knowledge of the English language.

That all appeared to be in jeopardy this week, when the Smithfield plant became the nation’s largest single-source coronavirus hot spot. Its employees now make up about 44 percent of the diagnoses in South Dakota, and a team of researchers from the Centers for Disease Control and Prevention has traveled there to assess how the outbreak spiraled out of control. Smithfield is the latest meat processing facility to close in the face of the coronavirus.

The startling toll on the workers has drawn criticism from union leaders who say the facility’s owners waited too long to introduce safety measures, and instead encouraged employees to meet the demand for their products that has surged amid the pandemic.

But workers, many at home battling weekslong fevers and debilitating body aches, are now facing another cruel reality of the virus: They are mourning both their co-workers and the jobs that made them sick.

With looming bills and the expectations of family members in the United States and abroad whom they support with their pay from Smithfield, many say they are eager to return to their jobs, including the double shifts they routinely put in over six and even seven days a week. During the closure, they have been guaranteed 80 hours of paid leave, far less than most would have earned through routine overtime. What more might be available through bonus funds is unclear.

For many of the workers, risk is nothing new. They fled war, food insecurity or ethnic persecution to reach the United States. Though they have seen colleagues crushed by fast-moving machinery, toppled by greasy floors and burned by powerful cleaning agents, many say they consider the job a privilege.

“I can’t wait to go back to work for the simple reason that this is the only thing that supports my family,” said Achut Deng, a Sudanese refugee who in six years worked her way up from a “wizard knife” operator paid $12.75 an hour to a shift lead making $18.70. “I do feel sorry for everyone who is going through this, I feel sorry for myself, but it’s like, I feel better now so I’d rather go back to work.”

The devastation wrought by the virus on their workplace and families has been swift. Smithfield employees and their family members account for nearly 70 percent of coronavirus diagnoses in Minnehaha County, which includes Sioux Falls.

One worker, Agustin Rodriguez, 64, died this week after contracting the virus. Mr. Rodriguez, an immigrant from El Salvador who cut pork feet at the factory, was active in his church; he lived in a trailer but was in the process of buying a home.

“He was a very friendly, respectful person,” said José Lopez, a former Smithfield worker who had been a break room buddy of Mr. Rodriguez, adding: “I have many friends who tested positive. This virus really hit us badly.”

Yet many workers said that the grueling work at the plant, before the virus hit, had offered them a life that otherwise would never have been possible as immigrants and refugees.

“Honestly, I was able to improve myself,” said Yoli Hernandez, a single mother of four from El Salvador, who started at the plant in 1999 and earns $17.30 an hour. “This is the only place where I was able to make a living and raise my kids.”

Sara Birhe, whose family arrived in Sioux Falls from Ethiopia in 2001, said her mother bought a four-bedroom house and sent her children to college on a single income from the plant. “Working at Smithfield, you can provide for your family and not struggle as much as if you were working in California, Chicago or D.C.,” she said.

Kooper Caraway, president of the Sioux Falls chapter of the A.F.L.-C.I.O., said the leaders began sounding alarm bells more than a month ago that the plant, because of its crowded conditions and lack of protective gear, could become a coronavirus hot spot.

“Management just kind of dragged their feet, kicked the can down the road,” Mr. Caraway said. “They just decided it was more profitable to hold off on instituting any of these changes until they absolutely had to. But by then, the virus was out of control.”

Smithfield officials said they have enhanced cleaning and disinfection at the plant, provided additional protective gear and expanded employee health benefits. They said they have also installed plexiglass and other physical barriers as well as thermal scanning equipment to detect employees with fevers.

“We are laser-focused on our employees’ health and well-being and are immediately taking all necessary actions to protect them,” Kenneth M. Sullivan, the company’s president and chief executive, said in a statement.

Ms. Deng, the refugee from Sudan, said she and her colleagues initially figured the virus could not be worse than what they had already lived through, “the war, the fighting, not enough to eat.”

After hours on the factory floor, they had gathered around communal tables in the crowded and boisterous lunchrooms, sharing sambusa from Sudan, egg rolls from China, tibs and injera from Ethiopia. They told stories that reflect different paths to the United States, yet struggles that were much the same.

At 6 years of age, after her grandmother was killed in an attack on her village in Sudan, Ms. Deng walked to a refugee camp in Ethiopia. She was later resettled in Kenya and, eventually, in the United States. She has gone days without food and put on shoes for the first time when she was 14.

But her bravado began to fade this month, when her fever rose to 103 degrees and she felt like something heavy was crushing her chest, preventing her from breathing. While her three young sons slept, she perched on the living room couch in her apartment, paid for by working 11-hour days at Smithfield, six times a week for nearly seven years. She was determined not to fall asleep because she feared she would not wake up.

“I thought, ‘OK, this is just like any other nightmare that I’ve been through,’” she said. “If I die, my kids are literally going to grow up just like I did. And it’s something I cannot put my head around.”

On top of providing for her own children, she also pays for an apartment in Uganda for her parents and for student housing for two of her brothers.

The company has said that workers must be asymptomatic for three days without taking medication and receive a doctor’s note before they can return to the processing lines. So she has been weaning herself off Tylenol, trying to keep her fever down with tea and lemon.

William Daldoum said his wife, Patricia, 53, who came to the United States from Sudan, has helped put three of their five children through college with the job she has held at Smithfield for almost 20 years.

“Refugees always have that mentality that you come to this country and you are thankful to be away from the war zone,” said Mr. Daldoum, a pastor at New Jerusalem International Church in Sioux Falls.

Yet he said he had always wished his family could have found another way.

“She is in pain all the time — neck, back and hands. She is tired all the time,” he said. “She just feels like she is obligated to do what she can do to support her family.”