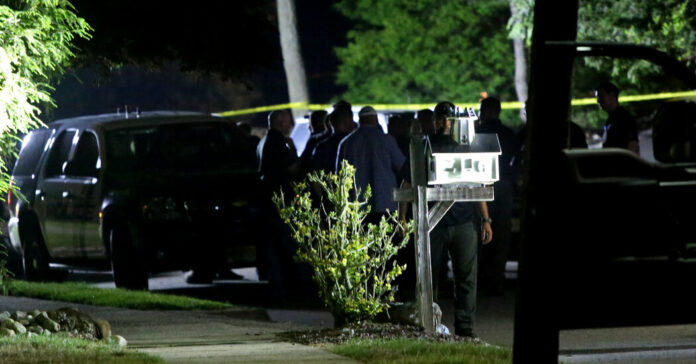 Roy Den Hollander was a self-described “anti-feminist” lawyer who flooded the courts with seemingly frivolous lawsuits that sought to eliminate women’s studies programs and prohibit nightclubs from holding “ladies’ nights.”

In one of his most recent cases, he openly seethed against a federal judge in New Jersey, Esther Salas, whom he described in a self-published, 1,700-page book as “a lazy and incompetent Latina judge appointed by Obama.”

Mr. Den Hollander left the case, in which he challenged the male-only United States military draft, last summer, telling a lawyer who replaced him that he had terminal cancer.

On Sunday afternoon, Mr. Den Hollander showed up at Judge Salas’s home in North Brunswick, N.J., and fired multiple gunshots, killing the judge’s son and seriously wounding her husband, who is a criminal defense lawyer, investigators said. The judge, who was in the basement at the time, was not injured.

The New York State Police found Mr. Den Hollander’s body near Liberty, N.Y. — about a two-hour drive from the judge’s home — after he shot himself in an apparent suicide, officials said.

The startling sequence of events was a reminder of the dangers encountered by judges, who typically do not receive special security outside the courthouse unless they face specific threats. Judge Salas worked in one of the busiest courthouses in the country, overseeing dozens of cases at a time involving a wide range of defendants and litigants.

The F.B.I. on Monday contacted New York State’s chief judge, Janet M. DiFiore, to notify her that Mr. Den Hollander had her name and photo in his car, according to her spokesman, Lucian Chalfen. The agents did not indicate whether Mr. Den Hollander had intended to target her as well, he said.

Investigators were exploring whether Mr. Den Hollander had decided to “take out” some of his enemies, given his cancer diagnosis, before he died, according to one law enforcement official.

Mr. Den Hollander, 69, identified with a broader movement of men who in often abusive, misogynist and hateful language rail against “feminazis.” He wrote numerous online screeds, some of which exceeded a thousand pages.

Mr. Den Hollander had a long history of filing lawsuits against programs that he believed favored women. In 2008, he told The New York Times that his anger toward feminists stemmed from his bitter divorce from a woman he married in Russia.

He called women “the real oppressors” in a 2008 Fox News appearance and wrote online about his grievances against female judges.

When investigators discovered Mr. Den Hollander’s body, they found a package nearby that was addressed to Judge Salas, according to a law enforcement official. The package was empty.

On Sunday afternoon, the judge’s husband was at home when he looked out the window and thought he saw a FedEx deliveryman.

Carlos Salas, an older brother of Judge Salas, described an account of the shooting that he said was provided to him by federal authorities. After the doorbell rang, the couple’s son opened the door and was shot. When the judge’s husband went over to see what happened, he was shot multiple times.

The judge ran upstairs from the basement when she heard a scream and the gunshots.

The judge’s husband, Mark Anderl, 63, was in the hospital in stable condition, Mr. Salas said. The couple’s son and only child, Daniel Anderl, 20, died from a gunshot wound to the heart.

Daniel Anderl was about to start his junior year at Catholic University of America in Washington and was interested in pursuing a legal career as his parents had.

“It’s surreal,” Mr. Salas said. “He was a vibrant, young, good-looking man. He had so much promise.”

The F.B.I. has been conducting the investigation with the U.S. marshals alongside other federal and local authorities. A spokesman for FedEx said in a statement that the company was “fully cooperating with the authorities in their investigation.”

Two law enforcement officials, cautioning that the investigation was in its earliest stages, said federal authorities were examining whether Mr. Den Hollander might be linked to the July 11 killing of another men’s rights lawyer, Marc Angelucci, in San Bernardino County, Calif.

Mr. Angelucci was shot at his front door by a gunman wearing a FedEx uniform, one of the officials said.

Judge Salas, 51, is the first Hispanic woman to serve as a federal judge in New Jersey. President Barack Obama nominated her to the United States District Court for New Jersey in 2010. She had previously served as a magistrate judge and an assistant federal public defender.

Judge Salas met her husband when he was a prosecutor in the Essex County Prosecutor’s Office, according to a 2018 profile of her in New Jersey Monthly. After a decade as a prosecutor, Mark Anderl became a criminal defense lawyer and now works at his own law firm, Anderl & Oakley P.C.

According to the federal docket, the only case that Mr. Den Hollander had before Judge Salas was a class-action lawsuit filed in 2015. He accused the Selective Service System, the independent government agency that maintains a database of Americans eligible for a potential draft, of violating women’s equal protection rights by requiring only men to register with the service.

In a 2018 ruling, Judge Salas allowed the case to proceed, a victory for Mr. Den Hollander. But in his online writings, he criticized the judge for not moving the case along fast enough.

Nicholas A. Gravante Jr., a partner at Boies Schiller Flexner, said Mr. Den Hollander had called him in May 2019 and asked him to take over the case. The two lawyers had overlapped as associates at the white-shoe law firm Cravath Swaine & Moore in the late 1980s.

Mr. Den Hollander said in the phone call that he could not continue in the case because he had terminal cancer and suggested that he did not have long to live, Mr. Gravante said. The case is ongoing.

Mr. Den Hollander has also sued various nightclubs, claiming they violated the 14th Amendment by having “ladies’ nights” discounts for women. After the case was dismissed, Mr. Den Hollander petitioned the Supreme Court, which declined to hear the case.

“Of course, the three females on the court probably voted against it,” Mr. Den Hollander told The Times in 2011. “Fighting for the rights of men is not very popular thing to do in America these days.”

In 2008, he accused Columbia University of trying to establish feminism as a “religion” at the school through its women’s studies program and proposed creating a men’s studies program that could “train males to recognize and handle the power females often use to manipulate them.”

Shortly before the 2016 presidential election, he filed a lawsuit in Manhattan accusing several prominent news reporters of conspiring together in violation of federal racketeering law to disseminate “misleading news reports” about President Trump.

Mr. Den Hollander’s online writings identified with the men’s rights movement, which gained traction in the late 1980s and 1990s as a response to the feminist critique of traditional masculinity.

The movement embraces “a celebration of all things masculine and a near infatuation with the traditional masculine role itself,” the sociologist, Michael Kimmel, wrote in his book “Angry White Men.”

In a 150-page document posted on his website, which has since been taken down, Mr. Den Hollander wrote extensive commentary about how to fight feminists and their supporters, describing the judiciary as “useless for men.”

“The courts support the violation of the rights of men whenever it benefits females,” Mr. Den Hollander wrote. “Men just don’t count to the courts.”

Mr. Den Hollander seemed to presage the violence that took place over the weekend in a 2010 article he wrote for A Voice for Men, a men’s rights website.

“The future prospect of the Men’s Movement raising enough money to exercise some influence in America is unlikely,” he wrote. “But there is one remaining source of power in which men still have a near monopoly — firearms.”

Mr. Den Hollander graduated from the George Washington University Law School in 1985. He later received a degree from Columbia Business School, according to a LinkedIn profile under his name.

In the epilogue of the online book he published in 2019, Mr. Den Hollander alluded to his cancer diagnosis, describing a visit to a surgeon and the need to hand off his cases to other lawyers. “Death’s hand is on my left shoulder,” he wrote, adding that “nothing in this life matters anymore.”

He said that he had enjoyed fighting against people who violated his rights.

“The only problem with a life lived too long under Feminazi rule,” he said, “is that a man ends up with so many enemies he can’t even the score with all of them.”