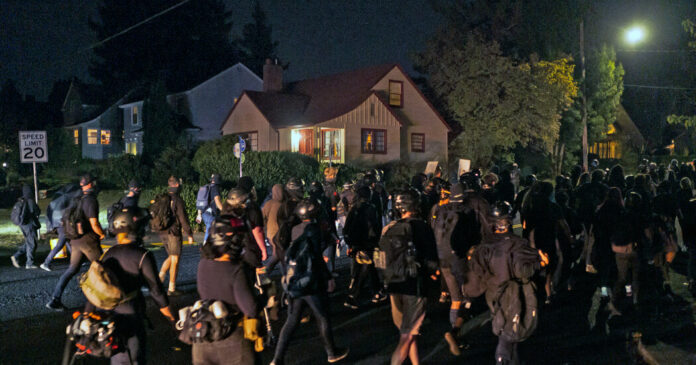 PORTLAND, Ore. — Terrance Moses was watching protesters against police brutality march down his quiet residential street one recent evening when some in the group of a few hundred suddenly stopped and started yelling.

Mr. Moses was initially not sure what the protesters were upset about, but as he got closer, he saw it: His neighbors had an American flag on display.

“It went from a peaceful march, calling out the names, to all of a sudden, bang, ‘How dare you fly the American flag?’” said Mr. Moses, who is Black and runs a nonprofit group in the Portland, Ore., area. “They said take it down. They wouldn’t leave. They said they’re going to come back and burn the house down.”

Mr. Moses and others blocked the demonstrators and told them to leave.

“We don’t go around terrorizing folks to try and force them to do something they don’t want to do,” said Mr. Moses, whose nonprofit group provides support for local homeless people. “I’m a veteran. I’m for these liberties.”

Nearly four months after the killing of George Floyd by the Minneapolis police, some protesters against police brutality are taking a more confrontational — and personal — approach. The marches in Portland are increasingly moving to residential and largely white neighborhoods, where demonstrators with bullhorns shout for people to come “out of your house and into the street” and demonstrate their support.

These more aggressive protests target ordinary people going about their lives, especially those who decline to demonstrate allegiance to the cause. That includes a diner in Washington who refused to raise her fist to show support for Black Lives Matter, or, in several cities, confused drivers who happened upon the protests.

But the tactics are dividing supporters of Black Lives Matter, with some worried that the confrontational approach will antagonize people who would be otherwise be receptive to the message, or play into conservatives’ critique of the protests, which have been largely nonviolent nationally.

Others, frustrated that little has changed since Mr. Floyd was killed, say that sitting idly and watching a protest without participating nowadays is to show tacit support for racism.

“We don’t need allies anymore,” said Stephen Green, an investor and entrepreneur in Portland who is Black. “We need accomplices.”

In Rochester, N.Y., protesters have confronted people at outdoor restaurants, shaking dinner tables. Marchers in Washington also accosted people eating outside, urging everyone to raise their fists to show their allegiance to the movement.

The more personal tactics echo those being used against elected officials, with activists showing up not only outside mayor’s offices but their homes as well. The apartment building where the mayor of Portland lives has been vandalized. Protesters lit fires outside, ignited fireworks and broke into one of the businesses in the building on his birthday. In San Jose, Calif., demonstrators graffitied and egged the mayor’s house and lit an American flag in front of it, according to the police. In Rochester, people have recently posted police officers’ home addresses and information about their families, according to a police spokeswoman.

In Portland, Jessie Burke, who is white and owns a coffee shop in the city, said the message of the movement was getting lost as the protests escalate and target ordinary residents in their homes.

“Everyone was looking for solutions at first, but now it’s just a nightly fight that has gotten progressively more violent — and every neighborhood worries that the fight will come to their neighborhood,” Mr. Burke said. “It’s: ‘Wake up, wake up, you need to be in the street protesting if you stand for this.’”

Still, Mr. Green argued that the tactics were working, even as they inconvenienced him and his family. He described the smell of tear gas and wail of sirens as the marches came to his neighborhood, which he said kept his 7-year-old daughter awake.

“It’s one thing if you can see something on TV, but if you can hear it and you can smell it in your house, that brings it home,” said Mr. Green, who grew up in Portland. “We need people willing to say, ‘I’m down to lose this friend because stuff needs to change. I’m down to make my neighbor uncomfortable.’ Being nice wasn’t changing anything.”

Lindsey E. Murphy agreed. She marched with the protesters through one of Portland’s wealthiest neighborhoods on a recent night and found it deeply moving. She watched white demonstrators shouting at white residents that Black lives matter — and the residents joining in with the chant.

“The crowd was — I won’t even say mostly white — I’ll say it was an almost exclusively white crowd marching through the whitest neighborhood in Portland shouting ‘Black lives matter’ and ‘Black lives are magic,’” said Ms. Murphy, who is Black and hosts an educational children’s YouTube series. “What I was witnessing was a lamenting prayer, a cry of remorse and shame among the white people. That’s what I saw. It was healing.”

The American flag that generated controversy is displayed in Kenton, a neighborhood of Portland with small bungalows, lush front gardens and ripe fruit trees. Weeks after the confrontation, the husband and wife who fly the flag said they were fearful of retaliation from the roving protesters, who had found their phone number.

But they say they will not be intimidated into removing the flag.

“I will not take my flag down,” said the husband, who declined to provide his name in a brief interview.

The same night the protesters came to the couple’s door last month, they marched into Kenton’s commercial district and used restaurant picnic tables as fuel for fires. They collected the colorful wooden dividers the neighbors had recently built for outdoor dining and set those ablaze as well. Mr. Moses and others in the community ran into the protests with fire extinguishers.

Mr. Green said that he opposed the destruction of property, but that he also understood it. And he believes, generally, that the more direct protest tactics in residential areas are working because they make the movement more personal, and reveal who truly supports change. If someone is against the movement, they keep their lights off or refuse to raise their fist, he said, adding that taking the debate into homes and to families is essential.

Some residents in Portland say the tactics are escalating as the protests become increasingly dominated by white people, including anarchists and supporters of antifa, the diffuse collection of militant left-wing activists that has a strong presence in the region.

The movement is splintered in Portland between more mainstream Black Lives Matter marches and the more aggressive, sometimes chaotic antifa or black bloc protests, where demonstrators dress in black and wear motorcycle helmets or ski masks to make it difficult to identify — or later prosecute — them.

One night this month, there were two protests promoted on the Black Lives Matter Portland Events page: a “nonviolent protest” in the city center and “an autonomously organized direct action march.”

No one appeared to be at the city center protest. But around 200 people were at the other event.

They gathered in an unlit park in a residential neighborhood around 8 p.m. Everyone wore black, including some protesters who had on body armor and motorcycle helmets. They hastily set up picnic tables and supply booths in the dark, using cellphones for light to showcase their goods. There was a food table overflowing with protein bars and Monster energy drinks.

A small free literature selection was set up on the grass and overseen by three people in ski masks. It was a popular offering, and people crowded around, craning to see the pamphlets.

Titles included “Why Break Windows”; “I Want To Kill Cops Until I’m Dead”; “Piece Now, Peace Later: An Anarchist Introduction to Firearms”; “In Defense of Smashing Cameras”; and “Three-Way Fight: Revolutionary Anti-Fascism and Armed Self Defense.”

The energy was something like a carnival in the dark.

But around 9:30, the group was in some organizational chaos. They had decided that the neighborhood close by was too racially diverse for them to protest in. They needed to go somewhere whiter.

So the protesters caravaned 20 minutes away to Alberta, a more affluent neighborhood that began being gentrified in the 1990s. They reassembled and marched through the streets.

Neighbors in impressive Craftsman-style homes pulled down their shades and turned off their lights, though many could be seen peering out of dark windows. One woman stepped out of an expansive home looking angry; upon seeing the crowd, she quickly retreated indoors. A few young couples stood in their doorways. A Black woman driving past honked and cheered.

One white man stepped onto his patio clapping and hollering in support of the passing march. The group called for him to join. He smiled and waved them on, still clapping. They began to chant that he was spineless. He looked worried. But the march moved along, and he went back into his house.

“You’ll never sleep tight, we do this every night,” the protesters chanted.