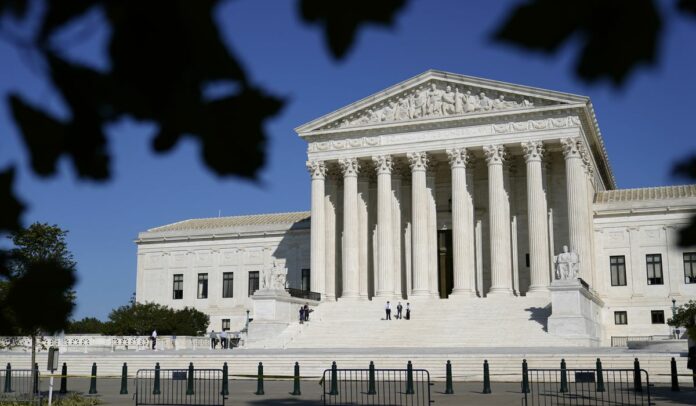 The vote count in the Senate shows Republicans can squeak through a confirmation of President Trump’s Supreme Court pick, with anti-Trump leader Sen. Mitt Romney pledging to help advance the nominee.

The move gives Mr. Trump the green light as he plans to unveil his pick Saturday to replace the late Justice Ruth Bader Ginsburg.

Mr. Romney said he was following the Constitution and precedent in helping advance the process.

“If the nominee reaches the Senate floor, I intend to vote based upon their qualifications,” said the Utah Republican.

Mr. Romney’s support for moving the confirmation process forward so close to the Nov. 3 election was a surprise. He was the lone GOP senator to break with his party and vote for an article of impeachment earlier this year that would have removed Mr. Trump from office and has opposed the president at nearly every turn.
With Mr. Romney now on board, the GOP has enough votes to push through a nominee without bipartisan support — and Democrats are left no procedural tools to stop them.
The Senate rules, in this case, put the GOP majority in the driver’s seat, Democratic senators acknowledged.

“If there had been some triple-secret procedural device, we likely would have used it with Gorsuch and Kavanaugh,” said Sen. Sheldon Whitehouse, a Rhode Island Democrat and member of the Judiciary Committee. “The idea that we have one and didn’t bother to use it in those last two confirmations seems a little bit of a stretch.”

The GOP majority has secured 51 votes to advance the process with just about 40 days until the election. The power play leaves Senate Democrats with no way to slow the process down in hopes that Democratic presidential nominee Joseph R. Biden wins in November, allowing him to argue that he should fill the high court vacancy left by Justice Ginsburg, a liberal icon.

The stakes couldn’t be higher for a high court confirmation battle. The confirmation of Mr. Trump’s nomination of a conservative justice will dramatically alter the balance of the court to a 6-3 split favoring conservatives.
Democrats are loath to let that happen.

House Speaker Nancy Pelosi, California Democrat, said over the weekend that her chamber would use “every arrow in our quiver” to try and delay the Senate from pushing through a new nominee before the election. She didn’t rule out potentially ruling out impeachment for either President Trump or Attorney General William Barr.

“At the current moment, we’re looking forward to the election. Healthcare is on the ballot. Civil rights is on the ballot. Decency is on the ballot. Unity is on the ballot. And the American people will ultimately make the decision as to whether Trump and his corrupt administration should be held accountable,” the New York Democrat told reporters. “But I don’t think we’re contemplating anything other than to say that all options are on the table.”

Mr. Trump pledged to nominate a woman and has a shortlist of five candidates:

Judges Barrett and Lagoa appear to be the leading candidates, according to sources familiar with the president’s thinking.

Even if the Democratic members of the Senate Judiciary Committee refused to show up at the confirmation hearing in an attempt to deny a quorum, the GOP majority could still hold the hearing.

Where the Democrats may have a leg up is when the committee meets to mark up the nominee, which usually occurs a week or two after the hearing. Committee rules suggest at least two Democrats would need to be present to vote the nominee out of committee and to the full Senate floor for a final confirmation vote.

But the GOP majority would have ways around it, such as changing the quorum requirement or discharging the nomination straight to the full chamber.

Democrats, lacking the resources to halt the process, have threatened blowback against the GOP if they move forward with filling the vacancy, saying they could pack the Supreme Court with more justices to counter the conservative majority if Democrats win the White House and Senate.

Senate Majority Leader Mitch McConnell bucked the threat to pack the Supreme Court, noting court-packing has been pushed by progressives for months.

“Democrats have already been playing this game for more than a year and a half,” the Kentucky Republican said on the chamber floor.

He pointed to a legal brief submitted to the high court by a group of Senate Democrats during last year’s term where they urged the court not to take up a Second Amendment case, suggesting if Democrats take the White House and Senate majority in 2020, they would pack the court so there’s not a conservative 5-4 majority.

“They threaten to wreck the makeup of the Senate if they lose a vote, and to wreck the structure of the Court if somebody is confirmed whom they oppose,” Mr. McConnell said, noting it’s a “danger to our democracy” to attack institutions.

Mr. Biden refused to say whether he would consider expanding the number of seats on the Supreme Court if Republicans press forward.

“It’s a legitimate question, but let me tell you why I’m not going answer … it will shift the focus,” Mr. Biden told WBAY-TV in Wisconsin.

Refusing to answer keeps Mr. Biden from alienating his far-left base but it also threatens to alienate moderate voters put off by court-packing, which has been used by socialist dictators such as Hugo Chavez.

Mr. Biden said as recently as July 2019 that he didn’t want to pack the court.
Senate Minority Leader Charles E. Schumer, New York Democrat, lashed out at the GOP Senate majority for blocking President Obama’s nominee in 2016, reasoning the next president after an election should be able to fill a high court vacancy.

He accused the GOP of being hypocritical, though Mr. Schumer also has reversed his position from 2016.

Republicans claim 2016 was different because there was a split government with a Democratic president and a Republican senate, but this year, both the White House and upper chamber are controlled by the GOP.

“The Republican majority would have stolen two Supreme Court seats, four years apart, using completely different rationals,” Mr. Schumer said. “Leader McConnell has defiled the Senate like no one in this generation and Leader McConnell may very well destroy it.”

Sen. Susan Collins of Maine and Sen. Lisa Murkowski of Alaska are the only Republicans in the chamber who have said they will vote against advancing a nominee because it is too close to the election.

• David Sherfinski and Gabriella Munoz contributed to this report.