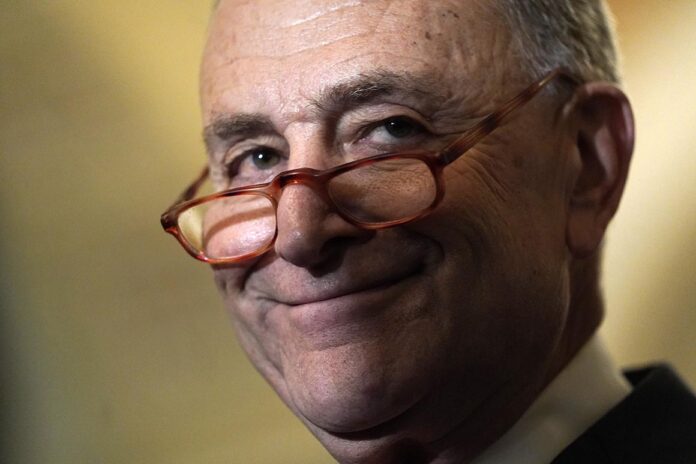 “We know that the votes are not there [to block the nominee], but you do what you can to call attention to it,” said Sen. Doug Jones (D-Ala.), the most vulnerable Democratic incumbent who could be pulled off the campaign trail as a result. “The issue is that this is a power grab.”

“We can’t do business as usual in a situation that’s so extraordinary where the Republicans are breaking their word to rush a nominee so they can kill the Affordable Care Act,” added Sen. Tim Kaine (D-Va.). “We can’t just say, oh, yeah, that’s normal. Sorry.”

The goal, senators and aides say, is to highlight what Democrats see as hypocrisy and a blatant abuse of power on the part of McConnell (R-Ky.), who blocked President Barack Obama’s Supreme Court nominee in 2016 but is pressing forward with the goal of confirming President Donald Trump’s pick, Amy Coney Barrett, before Election Day. McConnell only needs a simple majority after Republicans eliminated the filibuster for Supreme Court nominees in 2017. And if Democrats can prevent Barrett from being seated on the court before Nov. 10, she likely wouldn’t be able to rule on the Trump administration’s effort to invalidate Obamacare.

Democratic senators were quick to justify the retaliation effort, which is only getting started with less than 40 days until the Nov. 3 election.

Some Democrats have already said they will refuse to meet with Barrett, just as many Republicans snubbed Obama’s 2016 pick, Merrick Garland. But the party still plans to abide by some norms; Democrats on the Senate Judiciary Committee have decided to attend the confirmation hearings, despite calls from the left for a boycott.

Indeed, McConnell has told his members that they should be prepared for such tactics from Democrats, which could complicate campaign schedules for vulnerable GOP incumbents.

Here’s what Senate Democrats have in their toolkit:

Schumer’s opening salvo last Tuesday was to invoke the rarely used “two-hour rule,” which can be used to halt all committee business after the Senate has been in session for more than two hours.

The move caught senators and aides by surprise, and it caused the cancellation of several important committee hearings — most notably, a closed Senate Intelligence Committee briefing with William Evanina, the nation’s top counterintelligence official, on the subject of election security.

Republicans quickly derided the move as a “temper tantrum” on Schumer’s part. When Intelligence Committee Chairman Marco Rubio (R-Fla.) asked for consent that his panel hold its scheduled session with Evanina, Schumer objected.

“Because the Senate Republicans have no respect for the institution, we won’t have business as usual here in the Senate,” Schumer said on the Senate floor.

While the move made no difference for Republicans’ timeline to confirm a new Supreme Court justice, it was one of several ways Democrats could disrupt the chamber’s activity.

Perhaps most importantly, when the Judiciary Committee holds its series of confirmation hearings for Barrett in October, the sessions will almost certainly last more than two hours. Democrats could then invoke the two-hour rule to halt the hearing for the rest of the day.

The Senate can finish up its work on a bill or a nomination quickly with the agreement of all 100 senators. But that rarely happens, and McConnell and Schumer often spend their days haggling over floor time to reach a consent agreement.

On Thursday, Democrats refused to give consent for the Senate to quickly pass a government funding bill, requiring McConnell to file cloture and set up a final vote possibly for as late as Wednesday, just hours before the Sept. 30 deadline. The move also prevents senators up for reelection from campaigning while they tend to Senate business next week.

“Right now I think they’re just trying to throw a wrench into anything we do,” Senate Majority Whip John Thune (R-S.D.) told reporters. “Obviously it’s retribution for the decision on the court and they just want to be difficult. I don’t know why. It doesn’t make sense to me either to bring everybody back next week when we could finish this today.”

When the Senate concludes its business for the day, it requires the consent of all 100 senators. Any one lawmaker can object to recessing.

Democrats could force the chamber to remain in session even when Republicans want to close up shop for the day or for a couple of weeks in October to allow vulnerable incumbents to head home and campaign for reelection in the final stretch before November. Still, even if the Senate doesn’t formally recess, individual senators could still leave Washington.

In order to conduct business, the Senate requires a quorum, or a majority of senators to be present. Any one senator can move to require a quorum call. If just a few Republicans are absent for any reason, Democrats could boycott the quorum call, effectively preventing the Senate from doing business.

Points of order and motions to adjourn

Any senator can raise what is dubbed a “point of order” to ask the presiding officer a procedural question. If the senator disagrees with the presiding officer’s ruling, he or she can appeal it and trigger a roll-call vote, requiring senators to spend time voting on the objection. Democrats could theoretically do several of these in a row, which could stall proceedings for hours, even days.

They can also force a series of votes on motions to adjourn or to recess, further occupying valuable floor time and delaying the Senate’s business.

Get the House on board

There are a number of actions the Democrat-controlled House could take in order to force the Senate to take up unrelated business.

One of these is a War Powers Resolution, which, if passed by the House, can be put to the Senate floor even by Democrats, who are in the minority.

Some Democrats floated the highly unlikely possibility of impeaching the president or Attorney General William Barr, which would force the Senate to take up a trial. But the idea quickly fizzled — and Republicans could simply vote to dismiss the trial altogether.

After the Supreme Court nominee’s confirmation hearings in the Senate Judiciary Committee, any senator can move to delay the final committee vote by a week. That committee vote formally advances the nomination to the Senate floor.

Under the current timeline, even if the committee vote is pushed back by a week, the nomination could reach the Senate floor the week before the election. But the Senate could also vote for the nominee in the lame duck session.

But how far are Democrats willing to go?

Individual senators have been known to cause a procedural fracas here and there on the Senate floor — but if Schumer develops a cohesive strategy and has the support of the entire Senate Democratic Caucus, it could quickly become one of the most disruptive series of delay tactics in recent memory.

Even Sen. Joe Manchin (D-W.Va.), who voted to confirmed Supreme Court Justice Brett Kavanaugh and is considered the most conservative Senate Democrat, is on board with Schumer’s initial effort. He was quick to justify Schumer’s use of the two-hour rule, which halted committee business last Tuesday.

“Hell, we don’t do anything around here anyway, we’ve got plenty of time to do meetings,” Manchin said. “They can reschedule.”

Moderate Democratic Sen. Jon Tester of Montana said he doesn’t plan to “second-guess” Schumer, in part because he views the alternative as the destruction of the Senate.

Other Democrats said the disrupt-and-obstruct strategy could prove useful as the party seeks to further highlight the Senate’s inaction on pandemic relief, which has stalled for weeks after negotiations broke down.

“We’re in the middle of a recession and a pandemic, and apparently he’s going to move heaven and earth to ram through a partisan nominee for the court, but there’s no time for us to resolve that?” Sen. Chris Coons (D-Del.), a Judiciary Committee member, said in an interview.

At the same time, some Democrats are warning that there should be some limits to the dilatory efforts, in particular when it comes to interfering with Senate activity that remains bipartisan, such as the Intelligence Committee briefing that was scrapped last week.

“You have to be selective about it,” Kaine said.