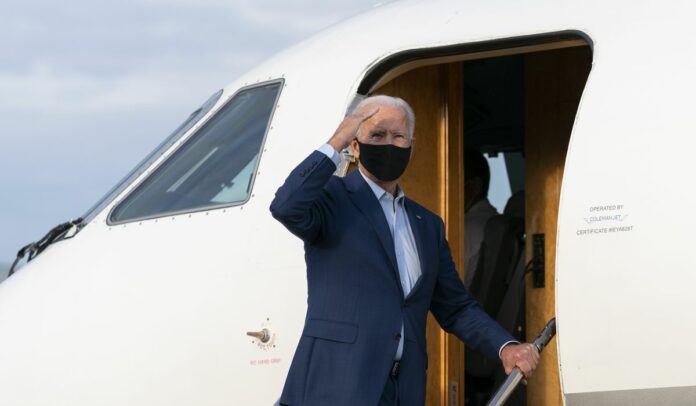 Joseph R. Biden blew up his 1988 presidential bid with a plagiarized fictitious account of his hardscrabble roots, but the experience failed to cure him of his tendency to exaggerate, conflate and even invent stories about his upbringing and political history.

Since the start of the 2020 campaign, Mr. Biden has been caught on numerous occasions spinning false and even ludicrous yarns, a tendency that has prompted head-scratching from his supporters and exasperation from conservatives stunned that his tall tales have yet to torpedo his salt-of-the-earth image.

“This has been a career-long problem that he’s had,” said Rick Manning, president of the free-market Americans for Limited Government. “I think a lot of people look at the things he’s doing now, and say, oh, he’s getting older, and that may be true, but the fact is, this is his historical record. This is not a recent phenomenon. This is who he is.”

Last year, Mr. Biden told voters in South Carolina that he “got started” at Delaware State University, a historically Black college. There is no record of his having attended. He said he remembered meeting with the Parkland students when he was vice president. The school shooting happened more than a year after he left office.

The reality was significantly different. Mr. Biden did visit Afghanistan, but as a senator in 2008; the soldier was not a Navy captain but an Army specialist, and he was presented with the Medal of Honor at the White House by President Barack Obama, not by the vice president overseas, according to a Washington Post fact-check.

Mr. Biden did pin a medal on another soldier in 2011 who said he didn’t deserve it in, and later defended his account, disputing the idea that “there’s anything I said about that that wasn’t the essence of the story,” as he told the [Charleston] Post and Courier.

He did backtrack in February after claiming at least twice on South Carolina campaign stops that he and former U.N. Ambassador Andrew Young were arrested in the 1970s trying to visit Nelson Mandela in prison. Mr. Young later told media outlets it never happened.

In a Feb. 28 CNN interview, Mr. Biden acknowledged “I wasn’t arrested,” but added, “I was stopped.” He went on to describe how “Afrikaners” with “short pants and their guns” made him go through a “white only” door while directing Black lawmakers elsewhere, an account disputed by others because, for one, the delegation had not traveled to South Africa in 1976 but to Lesotho, which did not have apartheid.

A Feb. 25 fact-check by the Washington Post gave the account four Pinocchios in an article headlined, “Biden’s ridiculous claim he was arrested trying to see Mandela.”

The Washington Times has reached out to the Biden campaign for comment.

Embarrassing as it may have been, the whopper didn’t hurt him in the Feb. 29 primary. Mr. Biden won South Carolina with 39% of the vote, more than twice as much as second-place finisher Sen. Bernie Sanders, marking the start of the former vice president’s comeback.

None of this has received the same attention as the scandal that knocked him out of the Democratic primary in 1987, thanks in part to an overwhelmed news cycle dominated by the pandemic and protests, coupled with the “Trump lied” narrative.

Mr. Trump has been accused of being a habitual liar by media outlets and Democrats, including Mr. Biden, who recently said that the president “knowingly lied” about the threat of COVID-19, which Mr. Trump has denied.

The Washington Post says he has made more than 20,000 “false or misleading claims,” which includes 360 statements about the economy during his administration being the best in U.S. history.

Is that a lie or spin? “What they call lies for Trump is partially spin, but a lot of times, it’s just disagreement on policy,” said Mr. Manning. “Those tend to be policy fights. But when it comes to what happened when your first wife and your daughter were killed, that’s a very edge-of-your-soul kind of fact.”

Indeed, most of Mr. Biden’s blarney could be defended as misleading but essentially harmless braggadocio were it not for the “drunk driver” claim. In 2001 and 2007, he indicated that the 1972 car crash that killed his wife Neilia and baby daughter was caused by a driver who had too much to drink, even though the investigation said otherwise.

The family of the driver, Curtis C. Dunn, wrote to Mr. Biden the first time asking him to stop. He agreed, but then repeated the line in 2007, saying that the driver “allegedly — and I never pursued this — drank his lunch.” He apologized in a call to Mr. Dunn’s daughter in 2008, according to the Newark Post.

“Joe’s calling card is decency, an affable man without a malicious bone in his body. Yet he allowed Dunn, who died in 1999, to go to his grave having been falsely shamed by Biden as a drunk driver responsible for the death of Biden’s wife and newborn daughter,” said conservative radio host Larry Elder in a March op-ed on RealClearPolitics. “What ‘decent’ man does that.”

It may be that sometimes Mr. Biden simply gets carried away. Last week, he repeated the line about being the first in his family to attend college — “Like, guys like me were the first in my family to go to college” — a false statement for which he paid a steep price.

He dropped out of the 1988 Democratic presidential primary after extensive coverage of a speech he lifted from Labour Party Leader Neil Kinnock about his coal-mining roots that included the line, “Why am I the first Kinnock in a thousand generations to be able to get to university?”

Mr. Biden used the same words and format, including, “I started thinking as I was coming over here, why is it that Joe Biden is the first in his family ever to go to a university?” and “Is it because I’m the first Biden in a thousand generations to get a college and a graduate degree that I was smarter than the rest?”

Not only was he accused of plagiarizing — the campaign said he had credited Mr. Kinnock as the source on some if not all occasions — but it turned out Mr. Biden was not the first person in his family to go to college.

His maternal grandfather, Ambrose Finnegan, attended Santa Clara College in California, according to Time magazine. His maternal great-grandfather, Edward Francis Blewitt, earned a degree in civil engineering from Lafayette College in Easton, Pennsylvania, and served in the state Senate.

Mr. Biden admitted as much in 1987, saying that “there are Finnegans, my mother’s family, that went to college,” promptly the Federalist’s Mollie Hemingway to write last week that it was “unclear why he has resurrected one of the false claims that got him in so much trouble 33 years ago.”

The same year, he exaggerated his academic credentials at an appearance in New Hampshire, saying that he attended Syracuse law school on a full academic scholarship, the only one granted; graduated in the top half of his class, and earned three undergraduate degrees.

He later admitted his “recollection was inaccurate”: He received a partial scholarship based on financial need; graduated 76th in a class of 85 students, and earned one bachelor’s degree with a double major at the University of Delaware.

Mr. Trump’s family has its own history of hidden heritage. Mr. Trump’s father Fred Trump for years concealed his German ancestry, saying he was Swedish, to avoid anti-German sentiment during World War II and afterward.

Donald Trump repeated the Swedish ancestry claim in his 1987 book “Art of the Deal,” but has since “acknowledged and embraced” his German roots, according to CNN, serving as grand marshal of a German-American parade in 1999 and describing himself in 2011 as a “proud German-American.”

Mr. Biden has occasionally joked about his record of embellishment. In a “Decision 2004” interview with Comedy Central host Jon Stewart, he said, “Hell, I might be president now if it weren’t for the fact that I said my uncle was a coal miner.”

“It turns out I didn’t have anyone in the coal mines,” Mr. Biden said to laughter. “I tried that crap — it didn’t work.”

Four years later, however, he was back at it. “I hope you won’t hold it against me, but I am a hard-coal miner, anthracite coal, Scranton, Pennsylvania,” he told a crowd, as shown on video posted by the Trump campaign.

Indeed, the Trump-Pence website offers a veritable treasure trove of Biden misstatements and exaggerations, labeling them “Joseph’s Book of Fables.”

As it turns out, however, Mr. Biden does have at least one relative in the coal-mining business. As noted by Wikipedia, Mr. Blewitt, his great-grandfather, “founded the Edward F. Gold Mining Company, a silver and gold mining operation in Montana.”