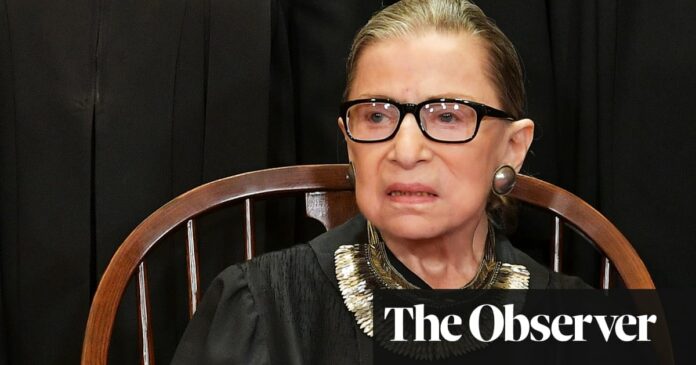 The death of Justice Ruth Bader Ginsburg has sparked a titanic political fight that could shape the future of US supreme court decisions on abortion rights, voting rights and other fundamental issues for a generation.

That fight could also determine the contours of American society for the next 30 to 40 years, given the central role the court plays in legislating on cultural, social and political issues.

The Senate confirmation battle to come will be a reminder of the influence the court wields within the US system of government and the impact it has on the lives of ordinary citizens.

Donald Trump has already appointed two supreme court justices – but both were conservatives replacing conservatives. If the president succeeds with a Ginsburg replacement it will fundamentally change the shape of the court, since it would replace a liberal with a conservative. This would deliver a handsome majority on the court and probably change American life in unprecedented ways.

The ability of the court to interpret legislation from abortion to voting rights and from racial segregation to LGBTQ+ issues means that a successful appointment would probably be Trump’s lasting legacy. Supreme court justices serve open-ended terms, impacting the country decades after any president leaves the White House.

Over the last century the court has played a fundamental role in reshaping US society. In 1954, it ruled that school segregation was unconstitutional. In 1973, its Roe v Wade decision legalised abortion. In 2015, it made same-sex marriage legal. To some, there have been decisions that have malign effects. In 2010, the court removed most restrictions on political spending by corporations. In 2013, it gutted voting rights protections in place since the civil rights era.

Such are the ways the court materially impacts the lives of US citizens. It is why the battle for Ginsburg’s replacement represents such a totemic fight for the future of America.

The 87-year-old led the liberal wing of America’s highest court which, technically, is meant to be apolitical. John Roberts, the chief justice, said in 2018: “We do not have Obama judges or Trump judges, Bush judges or Clinton judges.” But that principle has suffered years of erosion – if it ever held true.

Ginsburg’s death has struck the 2020 presidential election, already described as the most important in a lifetime, like a lightning bolt. It looks set to put the court at the centre of a category 5 hurricane of partisan brawling, political machinations – and profound uncertainty.

“I think the future is unwritten and anyone who tells you they know what’s going to happen is wrong,” said Chris Hayes, a host on the MSNBC network. “We are in utterly uncharted territory.”

The court is about to start a new term and can continue to function with eight justices although in the absence of Ginsburg, appointed by Bill Clinton in 1993, it has instantly been rendered more conservative.

Roberts has recently been the swing vote, usually siding with conservatives but sometimes with liberals, notably on decisions to uphold an important abortion precedent and protect so-called Dreamers (undocumented) from deportation. Now his influence may be diminished.

A week after the election, the court is due to hear a third challenge to Barack Obama’s signature healthcare law and consider the House of Representatives’ efforts to obtain secret grand-jury materials from special counsel Robert Mueller’s Russia investigation.

It is also possible that the court may be asked to rule on a disputed presidential election, just as it was in 2000 when it tilted 5-4 in favour of Republican George W Bush over Democrat Al Gore. Jim Sciutto, national security correspondent at CNN, tweeted: “A 5-3 conservative court may have some very big decisions to make about the upcoming election.”

Ginsburg’s empty seat is will be the latest monumental struggle in a country already shaken by the coronavirus pandemic and racial unrest. Like the bitterly divisive nomination of Justice Brett Kavanaugh in 2018, and like the election itself, both sides seem likely to portray victory for the other in existential terms.

Donald Trump has frequently touted his lifetime appointments of two conservatives to the supreme court, and 200 judges to lower courts, to rally supporters on the campaign trail. Earlier this month, just as in 2016, he unveiled a new list of prospective supreme court nominees. Despite Ginsburg’s parting message – “My most fervent wish is that I will not be replaced until a new president is installed” – he may decide to nominate one within days.

It would then be up to the Republican-controlled Senate to hold a confirmation hearing. On Friday night, Mitch McConnell, the majority leader, declared: “President Trump’s nominee will receive a vote on the floor of the United States Senate.”

There was an outcry, accusing McConnell of hypocrisy. When the conservative Antonin Scalia died in February 2016, also an election year, McConnell refused to act on Barack Obama’s nomination of Merrick Garland to fill the opening. The seat remained vacant until after Trump’s victory.

McConnell argues this case is different because in 2016 the president was Democratic and the Senate majority was Republican but now the same party controls both. His opposite number, Chuck Schumer, and the Democratic presidential nominee, Joe Biden, instantly rejected the view.

Obama wrote in a Medium post: “Four and a half years ago, when Republicans refused to hold a hearing or an up-or-down vote on Merrick Garland, they invented the principle that the Senate shouldn’t fill an open seat on the supreme court before a new president was sworn in.

“A basic principle of the law – and of everyday fairness – is that we apply rules with consistency, and not based on what’s convenient or advantageous in the moment. The rule of law, the legitimacy of our courts, the fundamental workings of our democracy all depend on that basic principle. As votes are already being cast in this election, Republican senators are now called to apply that standard.”

McConnell would have work at record speed to get a nominee through before an election just 45 days away. But Republicans could press on during the post-election “lame duck” session in November and December before the January inauguration – even if Trump has lost in a landslide. However, this could raise the prospect of a significant democratic deficit if a losing president – and potentially also a Senate that had switched to the Democrats – oversees such a key appointment. It would very likely lead to furious public protest.

Francis Boyle, a law professor at the University of Illinois, said: “The Senate majority leader, McConnell, has publicly said that he will fill this slot and I think he fully intends to carry that out. From their perspective, this is the chance of a lifetime to turn the court to the right.

“If you have a look at the opinions coming down this term, several of them were five to four, waffling on both sides of the issue, but now you’re definitely going to have six to three. So I don’t I think the Republicans will pass this opportunity.”

But McConnell is far from certain to get his way. Several Republican senators have previously said they do not think a supreme court justice should be confirmed so close to an election, and some – such as Susan Collins in Maine and Lindsey Graham in South Carolina – are facing tough re-election fights.

Laurence Tribe, a constitutional law professor at Harvard University, tweeted: “Senators Collins, Graham, [Chuck] Grassley and [Lisa] Murkowski are on record as of 2018 that no justice should be confirmed this close to a presidential election. Senator [Mitt] Romney should join them. Leader McConnell’s monumental hypocrisy cannot be allowed to prevail.”

Should McConnell succeed, the appointment would tilt the court to the right in its biggest ideological shift for half a century. Many progressives fear that could undo decades of advances in social justice.

But Curt Levey, president of the conservative advocacy group the Committee for Justice, insisted that it would not necessarily spell the end of Roe v Wade, the 1973 ruling that effectively legalised abortion nationwide.

“The Democrats have literally been that saying since the time that Sandra Day O’Connor was nominated [in 1981],” he said. “Every time there’s a Republican nomination for supreme court justice, no matter how moderate they are, the Democrats say Roe v Wade has never been in more danger and, so far, it’s not even turned out to be close to true.”

Levey added: “No matter who replaces Ginsburg, Roe v Wade is not going to be overturned. I’m not saying never in history will it be overturned, but we’re not one appointment away from Roe v Wade being overturned. So that’s just rhetoric. I don’t know if they believe it. Maybe they do.”

Others, however, warned that Roe v Wade has never been as vulnerable. Carl Tobias, Williams chair in law at the University of Richmond in Virginia, said: “It will look very bleak. They’ve whittled away at abortion ever since Roe v Wade but now I think they may well overturn it; certainly they will hollow it out even more than it is now so that almost any restrictions probably will pass muster with the supreme court with that kind of majority.

“They could even undo marriage equality, even though it would take an enormous lift to do that, it’s conceivable that could happen, or hollow that out too, restrict it as much as possible and leave it to the states or something of that sort.”

Voting rights could also be under threat, Tobias warned.

“As there’s a shrinking majority of old white people who support the Republican party, this will be the way they extend their power and that’s a real concern for many people.”