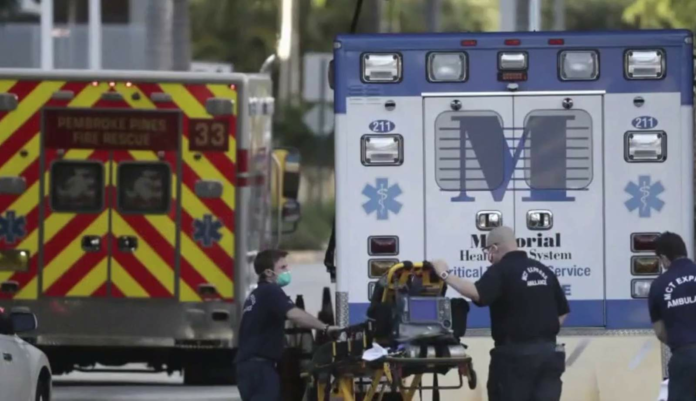 HOUSTON – This article is co-published with ProPublica, a nonprofit newsroom that investigates abuses of power. Sign up for ProPublica’s Big Story newsletter to receive stories like this one in your inbox as soon as they are published.

When Karen Salazar stopped by to check on her mother on the evening of June 22, she found her in worse shape than she expected. Her mother, Felipa Medellín, 54, had been complaining about chest pains and fatigue, symptoms that she attributed to a new diabetes treatment she’d started days earlier.

Medellín, who had seen a doctor that day, insisted she was fine. But Salazar, 29, noticed that when Medellín lay down, her chest was rising and falling rapidly — as if she couldn’t catch her breath.

“I grabbed her hand and I said: ‘I’m sorry. I know you don’t want to go to the hospital, but I’m calling the ambulance,’” Salazar said.

While Salazar was on the phone with a 911 dispatcher, her mother suddenly passed out. Then she stopped breathing.

With the dispatcher on speaker phone, Salazar attempted CPR, repeatedly pressing her hands down on her mother’s chest, silently praying for her to startle back to life. But by the time Houston paramedics arrived at her home in northwest Houston, Medellín was dead.

Days later, an autopsy revealed the primary cause: COVID-19.

“We never thought it was COVID,” Salazar said. “We didn’t even realize she had it.”

Medellín’s death is part of a troubling trend in Houston.

As coronavirus cases surge, inundating hospitals and leading to testing shortages, a rapidly growing number of Houston area residents are dying at home, according to an NBC News and ProPublica review of Houston Fire Department data. An increasing number of these at-home deaths have been confirmed to be the result of COVID-19, Harris County medical examiner data shows.

The previously unreported jump in people dying at home is the latest indicator of a mounting crisis in a region beset by one of the nation’s worst and fastest-growing coronavirus outbreaks. On Tuesday, a record 3,851 people were hospitalized for the coronavirus in the Houston region, exceeding normal intensive care capacity and sending some hospitals scrambling to find additional staff and space.

While far more people died of COVID-19 in those cities than have died so far in Houston, researchers and paramedics say that the trend of sudden at-home deaths in Texas’ largest city is concerning because it shows that the virus’s toll may be deeper than what appears in official death tallies and daily hospitalization reports.

Many people who die at home are not tested for COVID-19, said Dr. Jeremy Faust, an emergency medicine physician at Brigham and Women’s Hospital in Boston. In New York City, for example, only 16 percent of the 11,475 at-home deaths between February and June have been attributed to COVID-19, according to data from the U.S. Centers for Disease Control and Prevention.

“There’s no reflexive testing,” Faust said, noting that medical examiners are selective about the cases they take. “There’s no pressure to call it a COVID death.”

The rise in at-home deaths may also reflect people who are afraid to go to the hospital because of COVID-19, and who die of heart attacks, strokes, diabetes and other conditions not tied to the coronavirus, Faust said.

Ultimately, Faust said, public health experts trying to assess the toll from COVID will need to study how many excess deaths there are in a particular region and whether the demographics of those who died are different from what one might expect. “If there’s a huge spike in at-home deaths but no real spike in overall deaths, it’s just sort of rearranging deck chairs.”

Such an analysis takes time, in part because death certificates are not submitted instantaneously.

Dr. Peter Hotez, dean of the National School of Tropical Medicine at the Baylor College of Medicine in Houston, said the surge in at-home deaths reflects the nature of the way COVID-19 attacks the body. Early on, he said, doctors were focused on respiratory symptoms, but case studies in New York and elsewhere showed the virus also causes serious heart problems that can lead to sudden deaths.

“And it seems to be happening both early and late in the course of the illness,” Hotez said. “So patients are recovering and then they’ll come home from the hospital and they’ll die. Or they were never diagnosed, and the first manifestation is sudden death. So that’s a very frightening aspect of COVID-19 and why we need to work so hard to slow the spread, because you don’t even get the chance to seek medical attention.”

In the Houston area, the trend can be seen in autopsies performed by the Harris County Institute of Forensic Sciences. In May, among people who had died unexpectedly at home, the county medical examiner attributed just six deaths to COVID-19. In June, the number jumped to 19, with most of those cases coming in the second half of the month, coinciding with a surge in the number of confirmed coronavirus cases locally. Because the medical examiner only performs autopsies in a fraction of cases, these numbers are not comprehensive.

Data from the Houston Fire Department shows a 45% jump since February in the number of cardiac arrest calls that ended with paramedics declaring people dead upon their arrival at the scene. In March, the department recorded about 250 dead-on-arrival calls, the most of any month in the past two years up until that point. In June, the number grew to nearly 300, more than 75 in excess of either of the previous two Junes. And on July 3, officials said the department experienced the most such calls on a single day in recent memory: 18.

This doesn’t include cases in which responding firefighters have tried to resuscitate a person but were unsuccessful, which have also ticked up slightly since early this year.

Houston fire officials can’t say for certain what’s driving the increases, but Senior Capt. Isabel Sky-Eagle said it seems to be tied to the coronavirus crisis. Some of those found dead upon arrival had serious underlying health problems and didn’t realize they were also sick with COVID-19, Sky-Eagle said. Others had simply delayed medical care for too long, she said, possibly because they’d seen news reports about overburdened hospitals.

Sky-Eagle said she and her crewmates first noticed more people dying before paramedics arrived weeks ago, before internal data confirmed the trend.

“Normally these patients would have called us earlier on, and now they are waiting too long because maybe they don’t want to be transported to a hospital,” Sky-Eagle said. “Now we’re catching them when they’re already in cardiac arrest, and it’s too late.”

After nearly three decades on the job, Sky-Eagle said she’s gotten used to the fact that many of the people she’s called on to help won’t survive. But it’s frustrating, she said, when the call comes so late that there’s nothing she can do once she arrives.

“And then you put the stress of the COVID situation on top of that, where we’re left wondering, ‘Is this person dying because of COVID?’ It adds another layer of fear to the job that, day after day, starts to add up,” Sky-Eagle said, referring to the fear of contracting the virus or passing it to others.

Dr. Dario Gonzalez, deputy medical director of the New York City Fire Department, said the number of cardiac arrest calls that the department had to respond to in March and April was overwhelming. At the peak of the New York outbreak, the Fire Department was responding to more than 300 cardiac arrest calls per day, compared with a daily average of just 65 calls the previous year.

“The psychological toll on the providers is significant,” Gonzalez said. “You can lose one or two but when it’s constantly going, going, going. … It just seemed like it went on and on.”

“If we get hit with a second wave, that’s going to be a huge issue for us and the hospitals,” Gonzalez said. “Can the people — the nurses, the doctors, the EMTs and the medics — do it all over again? Everybody likes to say they’ll rise to the challenge, but there’s just so much challenge you can deal with.”

After her mother died so suddenly, Salazar said she and her siblings have been in a constant state of panic, worried that their father or another loved one could be next. Salazar’s mother had health problems before she contracted COVID-19, but none that were immediately life threatening.

Salazar told her dad that, after trying and failing to revive her mother with chest compressions, she wanted to take CPR lessons.

“At least then I will know what to do if this ever happens again to someone else I love,” she said. “Because right there in the moment, you just go blank.”

As Houston’s coronavirus crisis deepens — with area hospitals reporting baseline ICU beds filled beyond capacity — Salazar has been warning friends and relatives to take the virus seriously. She’s terrified that she might contract the virus and pass it to her father, who lived with her mother but tested negative last week.

“I told my dad, ‘I can’t be at your house right now,’” Karen Salazar said. “‘I know you feel alone, alone in the house where my mom passed away. We already lost our mother, we can’t lose you, too.‘”