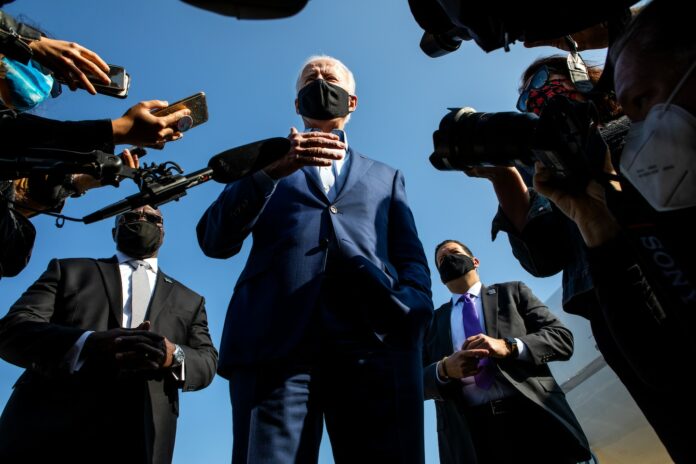 Biden and vice-presidential nominee Sen. Kamala D. Harris (Calif.) lead Trump and Vice President Pence by 53 percent to 43 percent among registered voters, statistically unchanged from the 12-point margin in a poll taken in August just before Democrats and Republicans held their conventions. Biden and Harris also have a 10-point advantage among likely voters, 54 percent to 44 percent.

A sizable gender gap continues to fuel Biden’s lead, with women making the difference in the current state of the race. Trump has a lead of 55 percent to 42 percent among male likely voters, but Biden has an even larger 65 percent to 34 percent advantage among female likely voters. Trump’s lead among men is about the same as his margin over Hillary Clinton in 2016, but Biden’s lead among women is more than twice as large as Clinton’s was then.

Biden’s current overall lead is slightly larger than the Post average of national polls over the past few weeks, which finds Biden leading by eight points nationally. National polling reflects only the potential popular vote for president and is not a direct indicator of the state-by-state competition for electoral votes that determines the winner. Further complicating any comparison, the Libertarian candidate will be on all state ballots but the Green candidate will not.

Post-ABC polls released during the week found very tight races in Florida and Arizona, while polls the previous week found Biden with a slight lead in Wisconsin and a large lead in Minnesota. Averages of battleground-state polls generally find a closer race than in the country overall, a sign of Trump’s continued competitiveness.

Interest in the election has climbed to near-record levels, with nearly 6 in 10 registered voters saying they are following the election “very closely,” higher than any in other presidential election at this time in the cycle dating back to 2000.

The president has repeatedly sought to question the reliability of mail ballots, asserting without evidence that voting by mail is subject to widespread fraud or foreign interference. (States that already use mail voting report minuscule incidents of fraud). In recent days, Trump has refused to say he will accept the outcome of the election and guarantee a peaceful transfer of power if he loses, citing mail voting.

Enthusiasm among Trump supporters is higher than among Biden supporters, a pattern that has been seen throughout this election year. Among registered voters, 65 percent of those currently favoring Trump say they are very enthusiastic about that support. Among those backing Biden, 47 percent of registered voters say they are very enthusiastic about their support for him.

Despite lacking fervor for Biden, the former vice president’s supporters are intensely concerned about Trump winning a second term, with a 70 percent majority of Biden voters saying Trump’s reelection would be “a crisis for the country.” By comparison, 59 percent of Trump voters say a Biden victory by would result in such a crisis. Among voters who support Biden but are “somewhat enthusiastic” or less about his candidacy, 56 percent say a Trump victory would mark a crisis.

The poll was conducted after the death of Supreme Court Justice Ruth Bader Ginsburg but before Trump’s Saturday nomination of federal Judge Amy Coney Barrett to the high court. But it finds that 64 percent of Biden supporters say the court vacancy makes it “more important” that he win the election, compared with 37 percent of Trump supporters who say the same about their candidate. Among all adults, Biden holds an eight-point advantage over Trump on whom Americans trust to handle the Supreme Court appointment.

Attitudes about the candidates, especially the president, have been fixed for several months. Today there are relatively few voters who say they could change their minds before they vote, with more than 9 of 10 Trump and Biden supporters saying they would not consider voting for the other major-party candidate.

Trump’s one bright spot comes on the economy, where 52 percent of Americans rate his job performance positively and 45 percent rate it negatively.

The new poll also shows improvement in people’s perceptions of the state of the economy, with 40 percent now rating it as either “good” or “excellent” and 59 percent calling it either “not so good” or “poor.” While the assessment is still net negative, that represents an improvement over an August measure, when 31 percent gave the economy a positive rating and 68 percent rated it negatively.

Countering the more positive assessment of the economy and of Trump’s handling of it is the public’s appraisal of how he has dealt with the pandemic. Forty percent approve of how he has handled the health crisis and 58 percent disapprove.

Trump has tried repeatedly to change public perceptions, both about the state of the pandemic, often in conflict with medical and scientific experts, and how he has dealt with it. Despite those efforts, there has been no change in the public’s judgment of him over the past three monthly surveys.

Trump has long promised his own health-care plan and recently said he would take steps by executive action on that front, including assuring coverage for people with preexisting conditions. But that provision is already included in the Affordable Care Act, which the administration and many Republican state attorneys general are asking the courts to dismantle, and his executive order is not binding. The Supreme Court has scheduled oral arguments on the law on Nov. 10, one week after the election.

Trump and Biden are rated about equally on who is more trusted to deal with the economy, which was decimated by the pandemic and, while showing some signs of recovery, could remain weakened for a considerable time, according to economic forecasts. In the poll, 48 percent of voters trust Trump more compared with 47 percent who say they trust Biden more.

Biden is more trusted to deal with another set of issues in focus this election year: racial injustice, policing in Black communities and the violence that has accompanied otherwise peaceful protests over the shooting of unarmed African Americans by police. By 55 percent to 39 percent, voters trust Biden to handle equal treatment of racial groups more than Trump.

Trump has focused on the violence that has erupted in some cities, making law and order a theme of his convention and some of his campaign rallies. But by 51 percent to 44 percent, Biden is slightly more trusted to deal with crime and safety.

Race, gender and educational differences define the major divisions between Trump’s and Biden’s coalitions and also point to shifts in sentiment compared with 2016 that put the president in a difficult position politically.

A principal challenge for Trump is replicating his 2016 support among White voters, who make up roughly 7 in 10 voters nationwide and larger percentages in the Upper Midwest states that sealed his 2016 victory.

Overall, the Post-ABC poll finds Trump with a narrow six-point edge among White likely voters (52 percent to 46 percent), smaller than his 16-point lead in a Post-ABC poll at this point in 2016 and his 15-point advantage in a Pew survey of confirmed voters that fall.

Among all non-White voters, Biden leads by 53 points, 76 percent to 23 percent. The sample sizes among Black, Latino or Asian American voters were not large enough to break out separately any of the groups among likely voters, nor Latino or Asian American registered voters. Among Black registered voters, Biden leads Trump by 88 percent to 9 percent, similar to Clinton’s margin but slightly lower than the support Barack Obama received in his 2008 and 2012 campaigns.

The educational divide among voters helped seal Trump’s victory four years ago. Clinton won college-graduate voters overall by 21 points in Pew’s survey of confirmed voters, and she lost those without a college education by seven points. Today, Biden is ahead among college-educated voters overall by 30 points and narrowly behind among those without college degrees, by six points.

Biden and Trump are roughly even in the battle for crucial suburban voters, with 52 percent supporting Biden to 47 percent for Trump. Again, Biden relies heavily on female voters. Suburban men back Trump by 60 percent to 38 percent, while suburban women favor Biden by an even larger 66 percent to 34 percent.

One group particularly likely to say a Trump victory would result in a crisis for the country is female voters supporting Biden, with 78 percent expressing that view, compared with 58 percent of men.

Another group whose allegiance today appears different than it was four years ago is voters 65 and older. Biden receives 52 percent support to Trump’s 47 percent among this group. Trump carried those voters over Clinton by between seven and nine points, according to some surveys. Biden supporters 65 and older are also significantly more likely to say it would be a crisis if Trump won reelection, with 79 percent of them holding that view, compared with smaller shares of younger Biden supporters.

The Washington Post-ABC News poll was conducted by telephone Monday through Thursday among a random national sample of 1,008 U.S. adults, including 889 registered voters and 739 likely voters. Three-quarters of the sample were reached on cellphones and the remaining quarter on landlines. Results among adults and registered voters have a margin of sampling error of plus or minus 3.5 percentage points; the error margin is plus or minus four points among the sample of likely voters. Error margins are larger among subgroups.

Scott Clement and Alauna Safarpour contributed to this report.