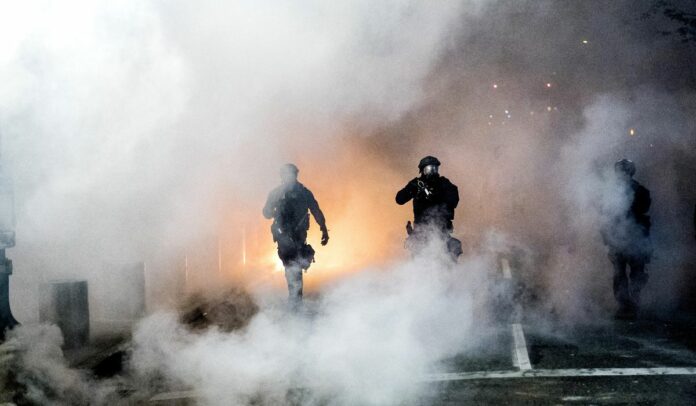 Democrats and mayors escalated their calls Tuesday for federal law enforcement to withdraw from Portland, but if they did, Acting Homeland Security Secretary Chad Wolf said violent mobs would raze the federal courthouse — and local authorities would do nothing to stop them.

As officers braced for a 53rd straight night of rioting in Portland, the Trump administration pushed back against the Democratic narrative of federal “storm troopers” laying siege to peaceful protesters, describing the agitators as organized, armed, dangerous and bent on destruction.

Meanwhile, Portland Mayor Ted Wheeler continued to call for federal forces to withdraw, demanding in a statement a congressional investigation into the “unilateral federal intervention in our cities” and the “unconstitutional terror tactics.”

He was backed by five other progressive mayors, who joined him on a letter to Attorney General William Barr, and the U.S. Conference of Mayors, which argued that federal agents had “exacerbated a situation that Mayor Ted Wheeler said was calming down” and “terrorized peaceful demonstrators.”

“Now we hear that the President plans to expand this invasion to other cities, including some that have seen an increase in gun crimes and homicides,” said the statement. “There are many things the federal government can do to help cities and support local efforts, but sending in federal agents without any coordination with mayors and governors is not among them.”

The mayors also called for President Trump to abandon any plans to assist with rising crime in Chicago, Seattle or elsewhere, as he has suggested.

“[I]f he tried to do it, it would only create more problems,” said New York City Mayor Bill de Blasio at a Tuesday press conference. “It would backfire, it wouldn’t make us safer, and we would immediately take action in court to stop it.”

The White House showed no signs of backing down, accusing Democrats of seeking to score political points by attacking the president instead of clamping down on the unrest.

“By any objective standard, the violence, chaos and anarchy in Portland is unacceptable,” said Ms. McEnany. “Yet Democrats continue to put politics above peace while this president seeks to restore law and order.”

She pointed to the increasingly sophisticated tactics of agitators and incidents such as Friday’s ambush in Chicago, where 49 officers were injured in an attack by “black bloc” protesters hiding behind umbrellas who threw frozen bottles and wielded sharpened PVC pipes.

Mr. Wolf said he had no plans to bring teams of federal officers into other urban areas, insisting that “what we have in Portland is very different than what we’re seeing in any other city.”

Portland is unique in other respects. For one, he said, federal law-enforcement authorities have received no cooperation from officials. In addition, police only act to protect city property and employees, not federal buildings such as the Mark O. Hatfield Courthouse.

“What is occurring in Portland in the early hours of every morning is not peaceful protesting,” said Mr. Wolf. “These individuals are organized and they have one mission in mind, to burn down or to cause extreme damage to the federal courthouse and to law enforcement officers.”

Every night, he said, the peaceful protesters disperse at about 11 p.m., and then the agitators take over, bringing weapons such as baseball bats, lasers, fireworks and accelerants and typically focusing their attacks on the courthouse, and tangling with officers until 4 or 5 a.m.

“These individuals congregate in the same area night after night, we see them planning their attacks, and yet the city of Portland takes little to no action to stop or disperse this crowd,” Mr. Wolf.

He also emphasized that federal officials are responsible for protecting 9,000 facilities nationwide, but that DHS is only in Portland right now.

“What I would say is, if you did your job from a local perspective, we wouldn’t be there. Just like we’re not in any other city,” Mr. Wolf said.

In Congress, Oregon Democrats introduced legislation Monday to “block the Trump administration from deploying federal forces as a shadowy paramilitary against Americans,” and require federal officers to wear “individual and agency identification on uniforms” as well as ban the use of unmarked cars.

Rep. Earl Blumenauer, Oregon Republican, said “it’s clear that the Gestapo-like tactics used in Washington, D.C. and now Portland are likely a dress rehearsal for other communities around the country.”

The department argued that officers always identify themselves, but do not wear their names on their uniforms over concerns about doxing, and that they use unmarked cars to avoid being targeted by violent agitators.

DHS officials also pushed back against allegations of “scooping up” protesters, as Mr. Wheeler called it, saying that all the federal agents wear at least five patches identifying them as law enforcement, including yellow “POLICE” patches.

Federal officials, who include U.S. Marshals, have made 43 arrests. In addition, three officers have suffered eye injuries and may not recover their full eyesight.

Video from Monday night’s unrest showed rioters tearing off the plywood covering the courthouse windows and then using a fire extinguisher to try to break the glass “so that they can start a fire inside,” tweeted Portland journalist Andy Ngo. “They had some success doing that two weeks ago.”

Federal agents have sought to disperse the Portland crowds by deploying flash bangs, pepper balls and tear gas, something Portland police are all but prohibited from using.

Mr. Wheeler issued an order last month saying it should only be deployed when “life safety” is threatened, while a federal judge has extended an injunction that limits the use of tear gas only to disperse crowds when “lives or safety of the public or the police are at risk.”

While elected officials have been reluctant to criticize the protests, some community leaders spoke out at a Friday rally, saying they support efforts to reform the police while condemning the property damage and violence.

“[T]o those who are destroying buildings, who are setting fires, who are looting buildings, I want each of you to know, number one, we love you because you’re God’s children, [but] we don’t like what you’re doing,” said Pastor J.W. Matt Hennessee of the Vancouver Avenue First Baptist Church.

Daryl Turner, president of the Portland Police Association, said the community must put pressure on elected leaders to solve the city’s problems.