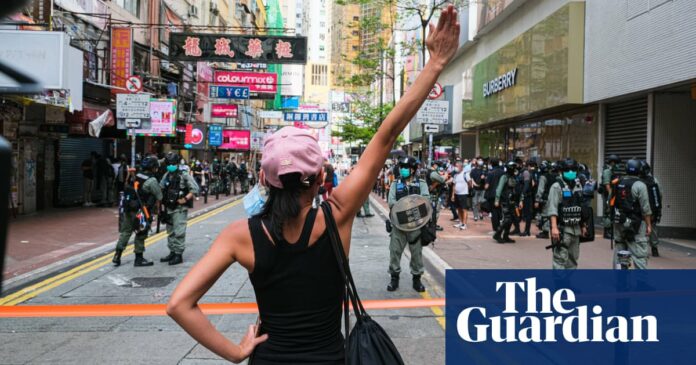 For Joshua Wong, Lee Cheuk-yan and James To – three of Hong Kong’s highest profile pro-democracy activists – the possibility of going to jail in China has never been more real.

The national security law passed in Beijing and enacted in Hong Kong on 1 July appears to be tailor-made for them in many ways.

In less than a week Hong Kong’s atmosphere has changed dramatically. People have been arrested for possessing materials deemed “subversive”. Colourful “Lennon walls” with pro-democracy messages have been torn down or replaced by blank notes after police warnings. Political groups have disbanded. Authorities have ordered schools to remove books that might “endanger” national security while public libraries have pulled sensitive books. Police no longer need search warrants for national security cases. A hotel in Hong Kong’s Causeway Bay has been turned into the national security office and opened on Wednesday.

The law – which punishes crimes of secession, subversion, terrorism and collusion with foreign forces with up to life in prison – has been criticised by legal experts for its broad and vague definitions that would allow the authorities to prosecute whoever they wish. National security cases can also be sent to Chinese courts for trial.

Vowing not to give up on their mission, Wong, Lee and To say they are prepared to go to jail. Wong, 23, the face of the 2014 Umbrella movement who has already been imprisoned three times, told the Guardian that he had “no choice” but to keep going.

Beijing has labelled him the “black hand” of foreign forces for his campaign for international support for Hong Kong’s pro-democracy movement – an accusation that makes him vulnerable to the “collusion” charge of the new law, punishable by jail terms between three years to life imprisonment.

“Every night I go to sleep, I keep thinking I might be sent to China the next day,” said Wong. “But since we don’t know where the red line is, we can only continue to resist and continue our fight for democracy.”

A day after the law passed, Wong was out on the streets campaigning. The group he co-founded, Demosisto, disbanded hours before the national security law was enacted, but Wong still hopes to stand in the legislative council election in September. He is unlikely to succeed, as the authorities barred him from running in district council elections in 2019, accusing his group of advocating independence.

“Despite the chilling effect of the law, we have to think of ways to resist it,” he insisted.

Even veteran pro-democracy politicians are filled with trepidation.

Lee Cheuk-yan, 63, a former legislator and labour activist, is certain that he too will soon be jailed.

Already facing seven counts of illegal assembly charges for taking part in unapproved rallies, he risks falling foul of the national security law, which bars individuals from “colluding” with foreign powers. He testified against the new law before the US House of Representatives committee on foreign affairs on 1 July, the day it took effect. Nathan Law, the 26-year-old co-founder of Demosisto who also testified at the hearing, fled Hong Kong the next day, citing fears over his safety.

“Maybe after all these years, it’s now our turn to become dissidents,” Lee said.

“I just hope they’ll jail me in Hong Kong,” said Lee, who was detained in Beijing for three days in 1989 after the crackdown on the Tiananmen pro-democracy movement.

The chairman of the Hong Kong Alliance in Support of Patriotic Democratic Movements of China, which for 30 years organised candlelit vigils to commemorate the massacre until it was banned this year, also fears his group and its museum on the Tiananmen massacre might be closed at any time.

Asked whether he would scale back his activism, Lee said: “Unless you give up altogether, you cannot get around the law.

“If they want to accuse you, they will find a reason,” he said. “The only thing we can do is to continue what we were doing before.”

James To, an outspoken lawyer and legislator, also fears he could be implicated for “collusion” with foreign powers. In 2019 he, Lee, Law and barristers Martin Lee and Margaret Ng met the US secretary of state, Mike Pompeo, to discuss Hong Kong’s political crisis. Apart from himself and Law, all others in the party have been arrested for participating in unapproved protests in 2019.

As the United States prepares to impose sanctions on groups responsible for the national security law, To said his meeting with Pompeo could be construed as “requesting a foreign government to impose sanctions” on the Chinese government, which would warrant a jail term from three years up to life imprisonment. Although the law is not supposed to be retroactive, pro-Beijing figures say individuals’ behaviour in the past two years could be used as evidence in national security cases.

“I’d be naive not to [expect jail],” he said. “I have already told my eight-year-old that daddy might go to jail one day so he has to be strong.”

To had thought about toning down, but said: “If I can’t criticise the government, then what is the point of being a legislator?

“I will stay until I can’t carry on anymore,” he said. “But there will always be a risk. If they want to arrest me, there is nothing I can do.”

Lee believes that suppression will only work in the short term. He likens Hong Kong now to Czechoslovakia or Poland in the communist era and says people have been awakened in recent social movements.

“The regime is so powerful but you can never suppress the spirit of defiance,” Lee said. “It may go underground for a while but when a chance comes, people will come out again.

“That spirit will never be crushed.”