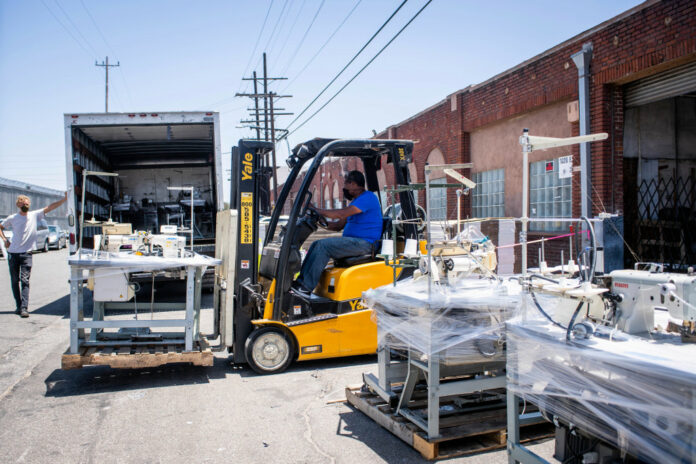 County public health officials said Friday, July 10, that they’ve ordered the continued closure of Los Angeles Apparel’s manufacturing facilities in South Los Angeles, announcing that more than 300 workers have been confirmed with the coronavirus and four have died.

The company’s manufacturing complex on 59th Street was originally closed June 27 after inspectors found “flagrant” violations of infection-control protocols and the company “failed to cooperate” with the county’s investigation of what were then about 150 total infections.

According to the county Department of Public Health, an official order was issued Thursday mandating the “continuous closure” of the facility — prompting a sharp rebuke from company CEO Dov Charney. He said late Friday that the county action came during a week in which he thought the county had signed off on the company’s operations.

“They (county officials) were here yesterday, and said we’re hear to help you,” Charney said. “They didn’t tell us to close. Everybody you talk to, there’s a new point of view. It’s outrrageous, especially since they made so little attempt to provide us with assistance when we asked for testing.”

But with new coronavirus surging across the region in recent days, officials have been warning of stiffer consequences for not following physical distancing requirements.

“The death of four dedicated garment workers is heartbreaking and tragic,” public health director Barbara Ferrer said in a statement. “Business owners and operators have a corporate, moral and social responsibility to their employees and their families to provide a safe work environment that adheres to all of the health officer directives — this responsibility is important, now more than ever, as we continue to fight this deadly virus.”

Public health officials said Friday three workers from the plant died in early June, and one more died this month. One of the four was a 20-year worker in the factories, Charney said. The agency began investigating conditions at the plant on June 19 after being notified by a “concerned health care provider.”

According to the department, investigators asked the company for a list of all employees so it could be compared with testing results, but the company failed to provide it.

In late June, inspectors found violations at the facility of distancing requirements and infection-control protocols, according to the department, noting that the company was using cardboard as a barrier between workers.

On July 4, the company sent the department an “incomplete list” of employees, and by then 198 positive cases had been reported. But as of Friday, that number had risen to more than 300, according to the public health agency.

Charney contended that there was only so much he could control in a company that employs up to 2,000 people — many of whom come from immigrant communities hit hard by the virus. And, he said, in earlier days of the virus, public health officials signed off on social distancing practices at his factories, which for weeks have transformed from producing clothing to mostly making face masks and protective gowns.

On Friday, he said the 300 cases were spread over a period of weeks, not days, and he added that he’s not convinced that the workers who died caught the virus at his factory, but rather in other areas in densely populated South L.A., where community spread is likely.

L.A. County’s Health Officer Order requires businesses with three or more known cases of COVID-19 within the workplace over the span of 14 days, to report the outbreak to the Department of Public Health. Employers who have one known case within the workplace must have a protocol that requires that person to self-isolate at home and anyone exposed to self-quarantine, according to the county.

Health officials said that despite the company being ordered closed in late June, LA Apparel reopened the factory with new employees, and company officials tried to prevent health inspectors from entering the facility. Charney said there was a delay as he talked to his lawyer about inspectors’ unannounced visit on Thursday. By Thursday night, he got notice to shut down.

“We’ve been concerned about LA Apparel because we’d been getting calls at least since May,” said Marissa Nuncio, director of The Garment Worker Center, referring to the issues that preceded the first county closure in late June.

The factories work on a 24-hour-7-day-a-week schedule, operating multiple shifts at three sites, each with more than 100 workers, the center said. Workers, according to the garment worker advocates, reported a lack of social distancing during multiple shifts throughout the pandemic — even as they worked to churn out masks and gloves for the safety of consumers.

One employee became ill not long after beginning to work there in May, according to the center; he tested positive for the virus and was ultimately hospitalized for almost three weeks.

On Friday, Charney — acknowledging the deaths were “devastating” — said a mobile testing sight popped up in the area, which drew huge lines of people to get tested.

But his business remained shut, a day after the county-ordered closure.  After meeting with county inspectors on Friday, he said the business was looking to put cleaning supplies at every worker station, change the kind of cleaning liquids it uses, train supervisors on better cleaning protocol, and create log sheets for each time a machine is cleaned.

“We’re going to ask for another inspection tomorrow,” Charney said.