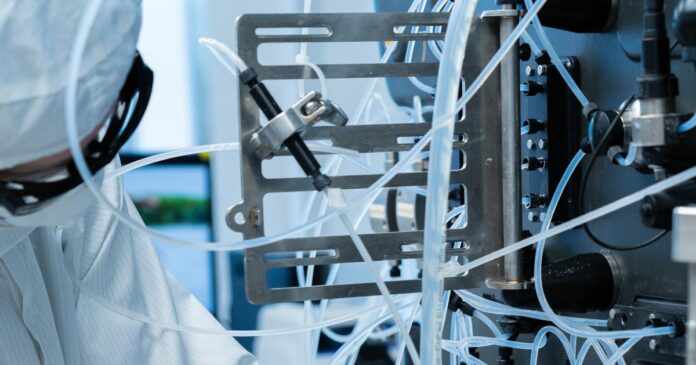 The idea is the antibodies in Weinrich’s plasma can help a sick patient fend off the infection. The 58-year-old computer programmer has donated his plasma, the antibody-rich liquid portion of his blood, four times over the past three months.

“I’m sort of squeamish about needles, but I thought if I could turn my negative into a positive, if I could help someone who is presumably a lot worse than me because they are in the hospital, I had to do it,” said Weinrich, who lives in Watkinsville.

Kevin Weinrich has donated plasma multiple times. He said he was thankful his employer, Vision Technologies, allowed him to take time off from work to donate plasma.

In the absence of a vaccine or proven treatments, doctors are increasingly looking to this century-old approach to a new and raging public health emergency. Hospitals have been transfusing what’s called convalescent plasma directly to sick patients. But this experimental treatment is limited not only by supply shortages but also because each person’s plasma has varying levels of antibodies and the transfusions require matching blood types.

Now, researchers are working on another approach that could overcome those limits. This therapy may be available this year, even well before a vaccine.

And a major hub for the research is in Georgia.

Takeda Pharmaceuticals, one of the largest biopharmaceutical firms in the world, has a $2 billion state-of-the-art facility stretching more than 1 million square feet just east of Covington. That facility, which employs about 1,000 people, now has a dedicated space and team of researchers focusing on the potential COVID-19 treatment called hyperimmune globulin, a type of plasma-derived therapy that could provide a reliable, consistent, and more potent level of antibodies. The treatment would also have a longer shelf life of 24 to 36 months compared to 12 months for convalescent plasma transfusions.

Bottles of frozen convalescent plasma are prepped prior to the start of the fractionation process. Fractionation is the process of extracting proteins, including antibodies, from plasma.
PROVIDED BY TAKEDA

Several other pharmaceutical companies, including competitors, such as CSL Behring, teamed up with Takeda to form an alliance to accelerate the development of the therapy. The alliance hopes to start clinical trials at several hospitals in the U.S. during the coming weeks. The facility in Georgia will manufacture the potential therapy for the U.S. trials.

Both methods of plasma therapy rely on willing and able donors. But plasma supplies are desperately short, as hospitalizations surge again. A national coalition which includes the Mayo Clinic has launched a push for plasma donations in a campaign called, “The Fight is In Us.”

To aid collection for its proposed therapy as well as other plasma-derived therapies, Takeda, a Japanese company headquartered in Tokyo, has invested in eight BioLife Plasma Services collection centers in Georgia.

A Takeda scientist sets up a chromatography system (a step in the process of separating antibodies from plasma) to use for the manufacturing process of a hyperimmune globulin for COVID-19.

Convalescent therapy is generally considered safe, according to Mayo Clinic, which is overseeing a national expanded access program for convalescent therapy and leading a large study on the effectiveness of the therapy, gathering data from hospitals across the country, including hospitals in Georgia.

Still, doctors stress that there are questions about how well plasma therapy will work for people sick with COVID-19.

Dr. Kent Holland, medical director of Northside Hospital’s blood and marrow transplant program, said the death rate of critically ill patients receiving convalescent plasma at Northside Hospital is much lower than the death rates reported in New York City during earlier months of the pandemic. He said this suggests plasma therapy, along with other treatment interventions that include the antiviral drug remdesivir, is making a difference and helping patients recover, though he said more research and studies are needed to determine plasma therapy’s therapeutic efficacy. About 400 patients at Northside Hospital have received convalescent plasma.

Stowell said plasma therapy is actually “old school” and with it generally considered safe, he believes “might as well give it a try.”

Doctors also expressed concern the therapy is not as effective as it might be because many patients receive it too late in the course of the disease.

It sometimes also takes days for the plasma to arrive, especially now. Most hospitals get it from blood banking centers, but even with those that have centers on-site, it can take several days to receive the plasma, which may be too late. The development of plasma-derived therapy is also dependent on donations from people, and whether or not it could keep up with demand remains to be seen.

Stowell said another issue is the varying degrees of antibodies in survivors’ blood. After Emory started independently testing antibody levels in donated blood from blood banks, he said about 20% were found to have “very, very low antibodies.”

“We try not to practice by anecdotes, but by data and science,” said Dr. Amy Hajari Case, medical director of pulmonary/critical care research at Piedmont Hospital. “Now that said, our options are seriously limited. There are limited tools in our toolbox, and this is something that possibly can help, and we are glad we can provide this.”

Plasma therapy works differently than a vaccine. When a person gets a vaccine, their own immune system actively produces antibodies to attack a pathogen. That’s called active immunity. Convalescent therapy offers what’s called “passive” immunity. It “borrows” the antibodies from someone who has successfully fought off the disease.

Before the development of antibiotics and vaccines, plasma therapy was used for a range of infectious diseases, including the Spanish flu in 1918, as well as meningitis and measles. During the 1918 flu pandemic, the rate of mortality decreased by as much as 50 percent among patients who received convalescent plasma, according to a meta-analysis of medical records available at that time and published in the Annals of Internal Medicine in 2006.

Plasma-derived therapies are used today for a wide variety of diseases and conditions, including autoimmune conditions and blood disorders, including hemophilia, an inherited bleeding disorder.

And when other treatments are unavailable, convalescent therapy has continued to be used, including for treating Severe Acute Respiratory Syndrome (SARS) and Ebola.

Studies of convalescent plasma therapies for SARS in 2003 and the 2009 H1N1 influenza showed measurable reductions of mortality, but efforts to treat Ebola virus infections during the 2014-16 outbreak in West Africa were inconclusive.

Carlos Soto, vice president of manufacturing for Takeda and site head of the Covington facility, said he remembers starting the conversation in February about working on a potential COVID-19 therapy.

“There is nothing novel about this, this is what we do every day, the only difference is the plasma comes from those who recovered from COVID-19,” Soto said.

If early data is strong, the treatment could be fast-tracked through clinical studies and regulatory review.

Meanwhile, Sidney Smith, a 29-year-old Georgia State police officer, and COVID-19 survivor, recently donated blood and plans to donate again. He said the process took about an hour. He said he realizes the benefits are still being evaluated, but even the possibility he could be helping is good enough.

“Even if it’s not an absolute lifesaver, if it is giving people hope, that’s good enough,” he said.

If you have had COVID-19 and want to donate plasma, you must be fully recovered to be eligible. You must be symptom-free for at least 14 days.

You must also meet standard requirements for all blood donors such as feeling well and minimum age and weight requirements. High school students who are at least 16 years of age require one-time parental consent. Other donors must be at least 17 years old. Your local blood donation site will ensure you meet the necessary criteria before donating.

Plasma donations compensation can vary based on weight and other factors, but donors can receive an average of about $75 per donation.

Plasma is the often-forgotten part of blood. White blood cells, red blood cells, and platelets are all important for body function. But plasma also plays a critical role. This yellow fluid carries the blood components throughout the body. Along with water, salt, and enzymes, plasma also contains important components which include antibodies. It’s often called “liquid gold.”