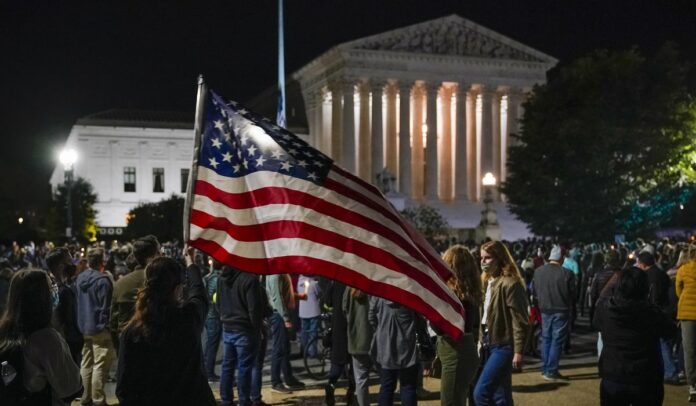 Senate Majority Leader Mitch McConnell has made a bold commitment to a vote this year to confirm President Trump’s nominee to fill the seat of Justice Ruth Bader Ginsburg, whose death Friday has upended the elections.

The Kentucky Republican will have a tougher time fulfilling this commitment, though, than he did with his 2016 promise to block President Obama’s pick.

Two Republicans, Sens. Susan M. Collins of Maine and Lisa Murkowski of Alaska, have said they will oppose any effort to install a Trump nominee until they see who wins the presidential election.

With Republicans holding an effective 53-47 edge in the Senate, that leaves Mr. McConnell with room for only one more defection.

Justice Ginsburg, on her deathbed, dictated a statement to her granddaughter saying it was her “most fervent wish” that her seat not be filled until a new president is sworn into office in January. Democrats, including presidential nominee Joseph R. Biden, say Mr. Trump and the Republican-led Senate should honor that wish.

But Mr. Trump is moving quickly. He said a nominee will be named this week, and it will be a woman.

“We won. And we have an obligation, as the winners, to pick who we want,” the president said Saturday.

Within hours of the news of Justice Ginsburg’s passing, Mr. McConnell flatly stated that Mr. Trump’s nominee would get a vote.

It’s a reversal from 2016, when Mr. McConnell announced just hours after the death of Justice Antonin Scalia that the Senate would take no action on President Obama’s nominee. Over the ensuing months, the majority leader successfully blocked a confirmation vote for Judge Merrick Garland on grounds that the nominee shouldn’t be confirmed in an election year under the political alignments at the time.

Mr. McConnell has reasoned this time is different because Republicans hold the presidency and the majority in the Senate.

“Americans reelected our majority in 2016 and expanded it in 2018 because we pledged to work with President Trump and support his agenda, particularly his outstanding appointments to the federal judiciary. Once again, we will keep our promise. President Trump’s nominee will receive a vote on the floor of the United States Senate,” Mr. McConnell said in a statement Friday.

Democrats, who excoriated Mr. McConnell in 2016 and demanded a vote, now say he must live by that “election year” standard.

Senate Minority Leader Charles E. Schumer, New York Democrat, held a call with his conference over the weekend, and several media outlets reported that he told the colleagues “nothing is off the table” if Republicans move forward to fill Justice Ginsburg’s seat.

“The American people should have a voice in the selection of their next Supreme Court Justice. Therefore, this vacancy should not be filled until we have a new president,” Mr. Schumer posted on Twitter.

House Speaker Nancy Pelosi, California Democrat, refused Sunday to rule out another impeachment attempt, which could tie up the Senate’s schedule in the months remaining in this Congress.

“We have our options. We have arrows in our quiver that I’m not about to discuss right now,” Mrs. Pelosi said on ABC’s “This Week.”

“Don’t vote to confirm anyone nominated under the circumstances President Trump and Senator McConnell have created,” he said. “Don’t go there.”

The confirmation battle is likely to become a major campaign issue. Election experts say Mr. Trump’s promise to appoint conservatives and his release of a list of potential names helped turn out Republican voters in 2016 who were not enthusiastic about him.

Mr. Trump appointed Justices Neil M. Gorsuch and Brett M. Kavanaugh. If he gets a third justice on the high court, it would be the most since President Reagan.

The Supreme Court battle is playing out in Senate races. Democratic challengers are demanding that Republican incumbents abide by the 2016 standard of not confirming a justice in an election year.

But Mr. McConnell has won commitments from some key Republicans.

Sen. Lindsey Graham of South Carolina, chairman of the Judiciary Committee and a senator who said in 2016 and 2018 that he would be bound by the Republicans’ precedent, now says he is on board with Mr. McConnell’s push.

Sen. Lamar Alexander, Tennessee Republican, said Sunday that he will back Mr. McConnell’s move as well.

“No one should be surprised that a Republican Senate majority would vote on a Republican president’s Supreme Court nomination, even during a presidential election year,” he said. “Sen. McConnell is only doing what Democrat leaders have said they would do if the shoe were on the other foot.”

A spokeswoman for Sen. Mitt Romney, Utah Republican, shot down a Twitter report saying the Utah Republican had privately committed to opposing a nominee until after the election.

One wrinkle is that Ms. McSally was appointed to the seat of the late Sen. John McCain and isn’t entitled to the full Constitutional term through January. The Arizona Republic reported Friday that should she lose in November, her Democratic successor could be sworn in as soon as the results are certified, perhaps by Nov. 30.

That could constrain Republicans’ ability to operate in a lame-duck session.

With the current Senate lineup, if Ms. Collins and Ms. Murkowski join all 47 members of the Democratic caucus to oppose Mr. Trump’s effort to push a nominee before the inauguration, Republicans would have one more seat of leeway — and none if the McSally scenario in Arizona plays out.

“As Mitch McConnell has said, there will be a vote. And I don’t think that we should discount Democratic votes, either,” he said on “Fox News Sunday.”

Mr. Cotton said there was a “referendum” on the issue of Supreme Court nominees in the 2018 midterms.