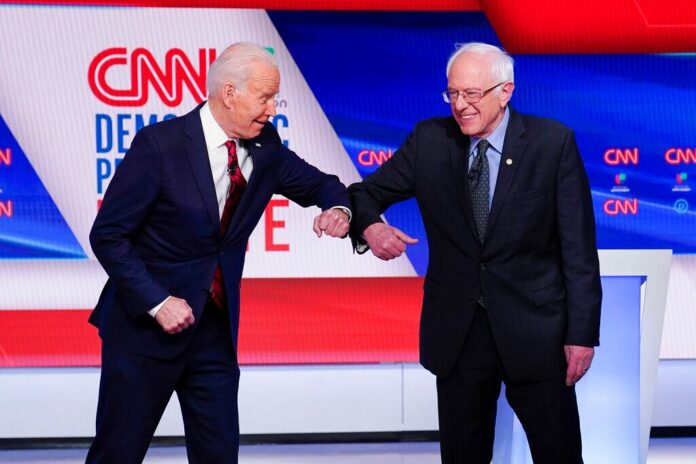 Joe Biden signed the death warrant for his campaign last week, even if he doesn’t know it. The joint manifesto he released with Bernie Sanders is 110 pages of radical far-left policies — from a job-killing $2 trillion climate agenda to eliminating cash bail and dismantling border protection.

It betrays the working-class voters Biden claims to represent and destroys any pretense that he is a “moderate.”

As Sanders has boasted, Biden would be “the most progressive president since FDR.”

STU VARNEY: ‘PEOPLE WILL START UNLOADING STOCKS’ IF IT LOOKS LIKE BIDEN WILL DEFEAT TRUMP

Well-meaning people might stick their fingers in their ears and vote for Biden out of nostalgia for a Democratic Party that no longer exists or out of exhaustion at the relentless anti-Trump barrage.

But with his “Unity Task Forces” document, Biden has proven only that he is an empty husk. Old Joe, who was for police and working people and law and order, is long gone. His body is there but, like his party, it has been invaded by the socialist left.

It is the Green New Deal on steroids.

It will eliminate fossil fuel power by 2035, aka “commit to eliminating carbon pollution from power plants by 2035.”

Note there’s no mention of “made-in-America” solar panels. The only way to install 500 million solar panels in five years is to buy them from China. In other countries, such as Australia, which have gone down this path, the result is cheap, shoddy solar systems that fall apart within five years.

Of course, we will have to rejoin the Paris Climate Agreement, and pay the Green Climate Fund, the United Nations slush fund which gives grants to China, even though China doesn’t contribute a cent.

This is a straight transfer of American taxpayer funds to the Chinese Communist Party. Way to go, Joe.

Hilariously, the document claims this will all result in lower electricity bills.

It’s a fantasy. America’s prosperity has been built on cheap fossil fuel energy. That will end with Biden’s plan. Where will baseload power come from when the sun doesn’t shine and the wind doesn’t blow?

Almost two-thirds of our electricity comes from fossil fuels and the experience of countries such as Australia and Germany is that switching to wind and solar drives up the cost of electricity.

Take California, which has mandated zero emissions by 2045. Electricity prices there are 60 percent more, on average, than in the rest of the United States and rose five times faster between 2011 and 2017, according to a study by Environmental Progress.

Naturally, the nation’s most radical green groups are cock-a-hoop about the Biden-Sanders manifesto.

The word “union” appears 49 times in the document and “working families” 17 times, as Biden pretends that high-paying fossil fuel jobs and pensions in places such as Pennsylvania and Ohio will be magically transformed into new climate jobs, building wind turbines and electric cars and climate-retrofitting 4 million homes.

To pay for all this, Biden promises to increase taxes. At least he’s honest about it.

In other words, he plans to punish the wealth creators and redistribute their money to an ever-expanding class of supplicants. Not that it will be enough.

Biden will abandon school choice and eliminate or hobble charter schools. That fits with his comments in May to an MSNBC public education forum when he said, “Charter schools are gone.”

Crime, too, will follow the de Blasio model which has been so successful in driving up crime rates in New York.

“Eliminating the use of cash bail” tops the list, along with “decriminalize marijuana use.”

Biden’s campaign vehemently denies that he supports defunding the police. But in an interview with activist Ady Barkan on digital media site NowThis News last week he said, “Yes, absolutely,” when asked if “we can redirect some of the [police] funding?”

Redirecting “some” funding away from police is a euphemism for defunding police, at least partially.

It tells you he has common cause with the anti-cop wreckers. So does the fact a Biden campaign staffer derided police as worse than “pigs” in tweets which also used the hashtag #Defundpolice.

Biden speaks out of both sides of his mouth on fracking, too. He said during a debate in April that he would ban oil and gas fracking, which accounts for 10 million jobs and has catapulted America to the top world producer.

But his manifesto will ban fracking on “federal lands and waters.” The Institute for Energy Research says the policy will reduce revenues by $6 billion nationally over the next 15 years and eliminate 270,000 US jobs.

Just what we need in a pandemic-crippled economy.

The biggest clue to the destructive ideology that drives the Biden-Sanders manifesto is the word “equity,” which appears 34 times.

Equity means equality of outcome, not equality of opportunity. It is the very DNA of Marxism and everything bad flows from it, as we saw in the Soviet Union, Mao’s China, North Korea, Cuba and Venezuela.

This is not a path to electoral success. The Democrats are following the same road to oblivion as Australia’s Labor party and the UK’s Labour Party did last year, with similar agendas.

No matter how many New York Times columnists try to craft Biden an image as “working class Joe” from Scranton, “a man who is not ideological,” or dream up excuses for him not to debate President Trump, the charade is unsustainable.

At some point the mask will slip.

This column first appeared in the New York Post.