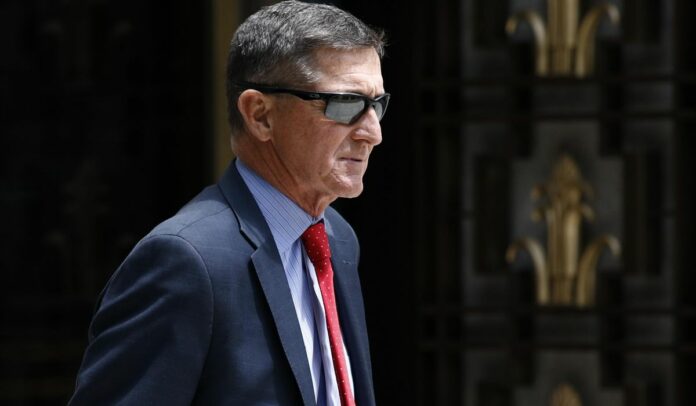 Retired Army Lt. Gen. Michael Flynn is nearing victory in his battle with the FBI, but the liberal media raised rumors in a parallel operation about the career intelligence officer, his appearance at a dinner in Cambridge, England, and a Russia-born, British citizen scholar.

Today, like so many Trump-Russia allegations, the news stories about Mr. Flynn and historian Svetlana Lokhova proved unfounded.

A newly disclosed document shows the FBI officially cleared both of improper Russia contacts weeks before the Flynn/Cambridge news stories began appearing in 2017 and continued into 2018.

Ms. Lokhova filed a libel lawsuit in Virginia last year accusing major news organizations of wrongly implying that she is a Russian spy who was in an inappropriate relationship with Mr. Flynn.

Her lawsuit, dismissed by a judge and now on appeal, lays the blame for such rumormongering on Stefan Halper, whom she also sued.

A Washington national security figure and Cambridge professor, Mr. Halper is the FBI spy who wore a wire and tried to coax associates of candidate Trump into admitting they conspired in Russian election interference. None did.

Ms. Lokhova’s lawsuit says a British reporter told her that Mr. Halper was his source for allegations that she was a Russian agent and had an improper relationship with Mr. Flynn. News stories show Mr. Halper was indeed a source for a negative portrayal of Mr. Flynn at the dinner, which Mr. Halper did not attend.

Mr. Halper filed a memo in U.S. District Court denying he was a source. The judge who dismissed the case said the lawsuit lacked evidence of Mr. Halper’s involvement.

The British reporter told The Washington Times that he does not recall speaking with Mr. Halper.

What has dramatically changed the record is a long-secret FBI document unearthed by U.S. Attorney Jeff Jensen, who reviewed the Flynn case on orders of Attorney General William Barr.

The redacted memo says the FBI on Jan. 4, 2017, cleared Mr. Flynn of improper Russia ties going back to the years covered in liberal media reports.

Steven Biss, Ms. Lokhova’s attorney, cited the memo in an appeals brief he filed June 24. He asserted that the redacted name of someone also cleared by the FBI is in fact his client, Ms. Lokhova.

A confidential human source (CHS) quoted in the document but not identified is Mr. Halper, Mr. Biss’ court filing says.

Taken in full, the Jan. 4, 2017, FBI document means that the Russia-tinged stories about Mr. Flynn and Ms. Lokhova did not pan out.

“The evidence shows the FBI Crossfire Hurricane team is paying a known liar,” Ms. Lokhova told The Washington Times, using the code name of the FBI’s Russia probe. “I’m interested in why the U.S. government allowed this known liar and paid him and sent him to the United Kingdom to ruin my life.”

Mr. Barr has moved to drop the case in which Mr. Flynn pleaded guilty to lying to the FBI and later withdrew the plea.

Sidney Powell, Mr. Flynn’s attorney, has argued that he was entrapped, threatened and framed by the FBI and special counsel Robert Mueller’s team. An appeals court has ordered U.S. District Judge Emmet G. Sullivan to dismiss the case.

That day, he hobnobbed with an elite group of spy scholars including Richard Dearlove, former chief of MI6, Britain’s CIA, and a consultancy partner of Mr. Halper‘s.

The catered dinner and conversation among 20 guests at the college’s Master’s Lodge were uneventful. Ms. Lokhova, a graduate student who had plumbed publicly available Russian archives for research material, was the only woman present. After dinner, she made a brief presentation about her Soviet intelligence research to Mr. Flynn.

Four years later, Ms. Lokhova capitalized on her research by writing “The Spy Who Changed History,” a chronicle of Josef Stalin’s relentless espionage.

Her mentor, Cambridge professor Christopher M. Andrew, urged her to stay in touch with Mr. Flynn, who revolutionized intelligence collection while posted in Afghanistan and urged a relentless, anti-Islamic extremist profile at the Defense Intelligence Agency. They exchanged a few emails, but Mr. Flynn and Ms. Lokhova never met again.

The Cambridge dinner would have remained the stuff of parochial campus history except for a confluence of events that made nearly every Trump associate a law enforcement and media target if they had ever talked to a Russian.

In late 2016, it became clear that the Kremlin interfered in the election by hacking Democrats’ emails and mounting blogs and tweets about Hillary Clinton.

His star fell fast. His transition phone calls with Russian Ambassador Sergei Kislyak fed allegations that he lied to the FBI. He was gone by February 2017.

The news media then erupted. That sociable Cambridge 2014 dinner became some sort of Russian influence cabal where Mr. Flynn must have done something inappropriate with Ms. Lokhova.

There is evidence that Mr. Halper played a part in spreading information.

Here is the start of a March 2017 story in The Wall Street Journal: “Former national security adviser Mike Flynn interacted with a graduate student with dual Russian and British nationalities at a 2014 U.K. security conference, a contact that came to the notice of U.S. intelligence but that Mr. Flynn, then the director of the Defense Intelligence Agency, didn’t disclose, according to people familiar with the matter.”

The story continued: “It isn’t known when Mr. Flynn’s contact with Ms. Lokhova at the 2014 meeting came to the attention of U.S. intelligence or whether it is part of the current investigation. … Two people who attended the Cambridge dinner and are associated with the event said that Ms. Lokhova approached Mr. Flynn at the start and that the two sat next to each other.”

Ms. Lokhova said she did not approach Mr. Flynn at the start and did not sit next to him. Her lawsuit says she did not work for Russia state-owned Sberbank, as stated in the Journal article.

That same month, The (British) Guardian newspaper reported: “U.S. intelligence officials had serious concerns about Michael Flynn’s appointment as the White House national security adviser because of his history of contacts with Moscow and his encounter with a woman who had trusted access to Russian spy agency records, The Guardian has learned.”

The newspaper continued: “One concern involved an encounter with a Russian-British graduate student, Svetlana Lokhova, whom Flynn met on a trip to Cambridge in February 2014.”

The Guardian asserted that she gained special access to Soviet archives, a claim Ms. Lokhova said is untrue. She had the same access as other historians.

After her attorneys contacted The Guardian, the newspaper pinned a note to the story saying, “We also wish to make clear, for the avoidance of doubt, that there is no suggestion that Lokhova has ever worked with or for any of the Russian intelligence agencies.”

In May 2018, The New York Times reported: “According to people familiar with Mr. Flynn’s visit to the intelligence seminar, the source was alarmed by the general’s apparent closeness with a Russian woman who was also in attendance. The concern was strong enough that it prompted another person to pass on a warning to the American authorities that Mr. Flynn could be compromised by Russian intelligence, according to two people familiar with the matter.”

The “source” would be Mr. Halper because a previous paragraph referred to the FBI’s “informant.” The article stands as evidence that Mr. Halper was spreading derogatory information about Mr. Flynn’s dinner conduct and a “Russian woman” — i.e., Ms. Lokhova.

Reporter Adam Goldman said on MSNBC’s “The Rachel Maddow Show”: “From [Mr. Halper‘s] standpoint, that was certainly a moment he took note of. It’s not clear if that information that went to the American authorities actually triggered a counterintelligence investigation, but it certainly would have been logged by authorities.”

In June 2018, The Washington Post wrote: “During a dinner Flynn attended, Halper and Dearlove were disconcerted by the attention the then-DIA chief showed to a Russian-born graduate student who regularly attended the seminars, according to people familiar with the episode. Both the student and a Defense Department official traveling with Flynn have denied that anything inappropriate occurred.”

The oddity in Mr. Halper’s tale is that he did not attend the dinner, sources told The Washington Times.

The Times asked Flynn attorney Ms. Powell for her reaction to the 2017-2018 media stories that asserted her client somehow violated protocol by attending the Cambridge dinner and speaking with Ms. Lokhova.

“It was a total lie,” Ms. Powell said. “They knew it. He always passed his polygraph tests, and he kept his clearance consistently with no issues ever.”